Welcome to the jungle

When we 1st moved into this house 18 months ago, Spencer was close to turning 2.  I took some of his birthday money and bought new bedding for him.  He had never once slept in his room in our previous house and it would be another whole year before he slept in his room here, but I wanted more mature bedding than the nursery set we had, which was this: 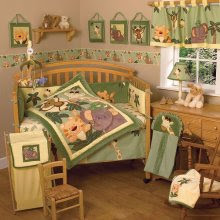 That's not his actual baby room, but we did have every single piece you see here.  It's a shame he never used it.
When I was pregnant I agonized over a farm nursery theme or a jungle nursery theme.  Agonized.  It's so funny, in hindsight, how little it all mattered since he lived in our room for almost 3 years. Anyway I still liked the whole jungle theme but wanted stuff that was more real.  Less baby.
This is what I bought: 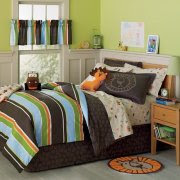 I bought that set at Kohl's.  During that same shopping trip I bought a big letter "S" to hang on the wall. 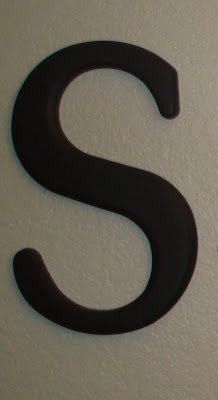 Lately (like the last 3 months) Spencer has been harping on me for not buying him more letters.  He wants letters for all his names- first, middle and last.  He wants his initials.  It's just my luck that Kohl's no longer sells these letters.  So I had several choices.  Find 2 different letters so all 3 are mismatched or buy 3 new letters and do something else with the "S" we already had.
I've been stalking Hobby Lobby for weeks now just AGONIZING over what to do.  The sheer brain power being used to try to figure this out has been ridiculous.  I won't bore you with the details about the 72 different plans I had, but I will show you the final result: 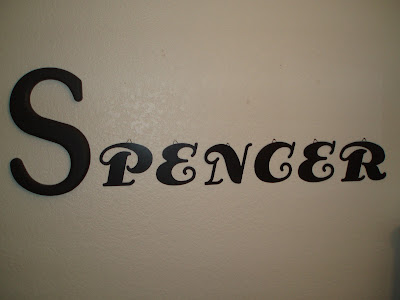 Now every night Spencer tells me I need to buy him ALL the letters for his middle and last names.  Keep dreaming, baby.  I am still mildly obsessed with finding new initials, so I will keep diligently stalking Hobby Lobby. 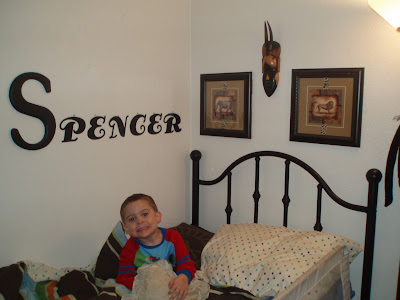 Want to see what else is hanging on Spencer's walls and learn the detailed history of each piece?
I thought you would.
These hang behind his bed.  The animal prints are from Kirkland and were cheap.  The mask is from Michael's brother.  He bought it for Spencer in Djibouti (Africa) when he was living there (he's in the Army).  It is authentic and has character and I sometimes worry that it is a voodoo mask. 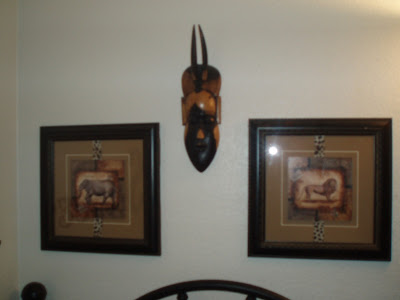 This is from Kirkland.  I bought it during their after Christmas sale.  It seemed more realistic than the giraffe, panda, monkey combo being offered.  Honestly.  Giraffes and pandas do not habitate together.  What were the designers at Kirkland thinking? 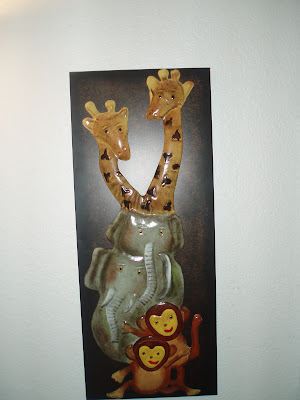 I bought this bulletin board at a model home that was closing in our old neighborhood.  It is heavy and huge and I spent like $12 on it.  I got a lot of cool stuff from that model home actually. 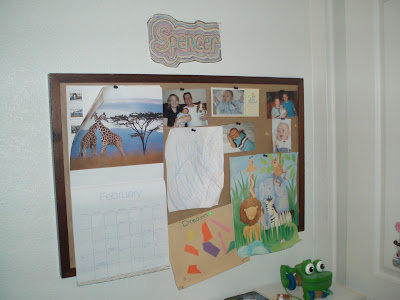 This cross-eyed alligator hangs above the closet door.  He came from the same after Christmas sale at Kirkland. 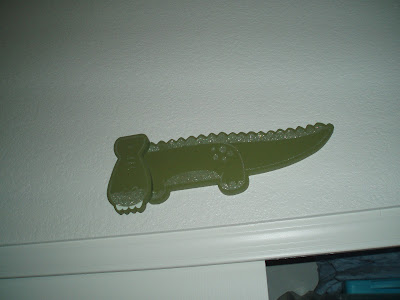 This grassland print (without any pandas) hangs above the dresser. I bought it from from Ross.  Michael cursed me when I did, because it doesn't have a center sawtooth hanger.  He hates hanging stuff with hangers on the sides. 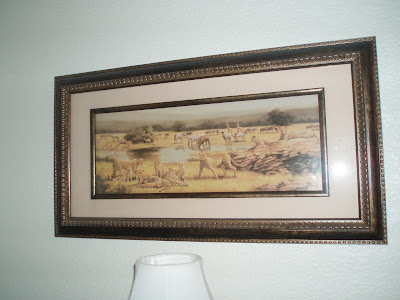 There's a lot going on on this wall.  The shelves are from IKEA.  The picture is the one we had people sign at Spencer's 1st birthdy party.  The mirror is from Kirkland and we bought it when we were encouraging Spencer to dress himself.  He can dress himself, but we are bad parents and dress him like 90% of the time because it is faster.  The ribbon board used to hang in my office when I worked at the Senate.  It's covered in tiny baby Spencer pictures.  I don't even remember why we did that. 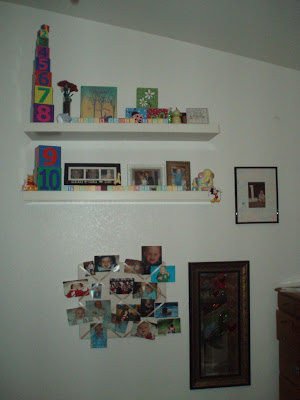 This is the door.  The animals are from Michael's Arts and Crafts.  I made the sign. 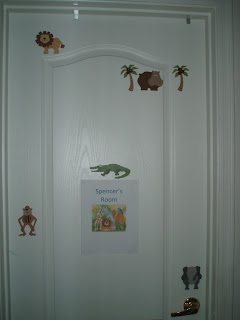 I just googled "jungle picture" and had thousands of images to choose from.  Can you guess why I picked this one? 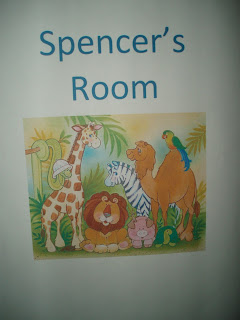 Let's discuss some details before I tell you why.  First, a camel?  A CAMEL?  In the jungle?  That's worse than the panda.  But I'll forgive the artist because we have bigger issues to deal with: A PIG?  A domesticated farm animal living in the jungle amongst wild creatures.  Really?
Truth be told this whole scene is a lie: Zebras, giraffes and lions live in the grasslands/plains/savannah of Africa. Camels live in the desert.  Pigs live on farms.  I'll give them the snake, turtle and parrot.  Those animals are jungley.
But I did pick and print it because of the pig.  He's so damn cute.
Posted by Natalie at 1:18 AM

I also hate when pictures have the 2 hangers on each side, so I will take a string & thread it through both of them & hang the pic on the string every time. Works like a charm! Except for shelves...
-Megan

You definitely have a vision and you stay with it until it's realized. I wish I could do that!

I think I'm very non-observant. I wasn't sure what was wrong about the jungle picture until you gave your explanation.