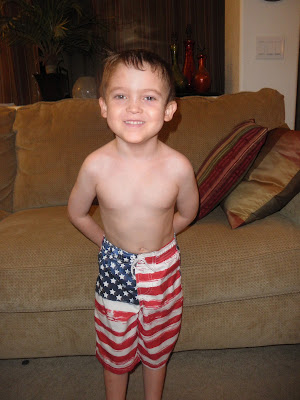 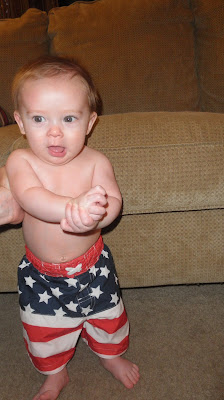 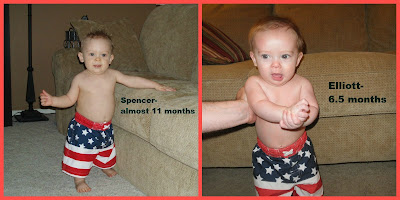 I was smart this year and bought Spencer's suit as soon as I saw it in early May.  The suit he wore for 3 years in a row still fits around his waist (it's a 24 month suit.  He's almost 5.), but it's darn short.  Elliott is in Spencer's old 12 month suit because I just wasn't willing to buy a new suit strictly for the photo op.  I shocked even myself with my restraint.  It touches his ankles.
Posted by Natalie at 6:26 PM

But it was down to Spencer's ankles too!

SO cute! Love them!

This is so cute! Seriously, your boys are just too cute. Am I crazy or are they starting to look alike now? Maybe it's just the shorts! :)

Awww, I love the patriotic swim trunks! My 5 year old (skinny little shrimp) can also still wear 24 month/2T shorts. If he wears bigger shorts, he has to have the adjustable waist band. My 14 month old can also wear 24 month/2T so they share several pairs. Haha!

I am (surprisingly) impressed with your restraint.