We were sitting on the couch in the family room watching a movie on New Year's Eve.  I looked around and frowned.  I sighed loudly.  I told Michael that I hated how the furniture was arranged.  It was functional, but just barely.  Something needed to be done.  He rolled his eyes.  I started a 24 hour shock and awe campaign to convince him to help me move everything.  I succeeded in only 14 hours.  What is even more impressive was that in the same amount of time I also convinced him to go to IKEA and buy a new bookshelf.
This is before 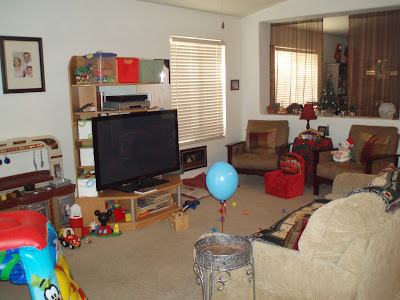 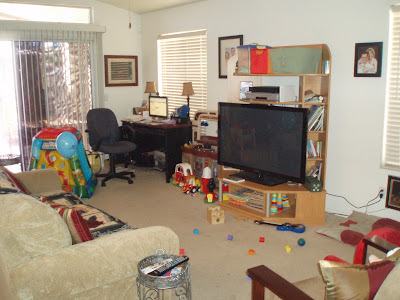 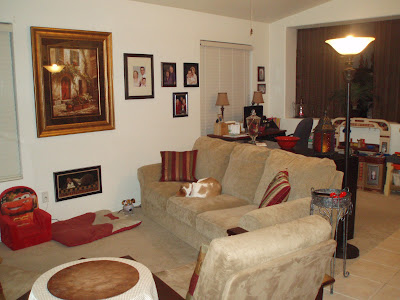 Isn't it great?  So much more functional and pleasing to the eye. 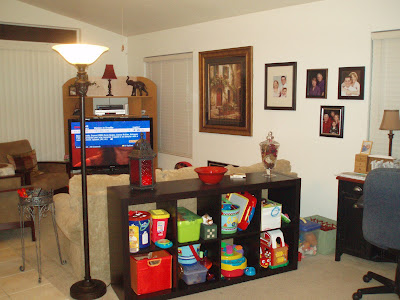 This is the little office/play area. 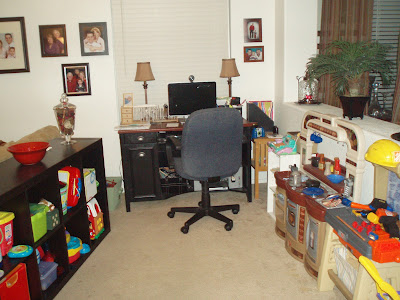 This is the entertainment zone. 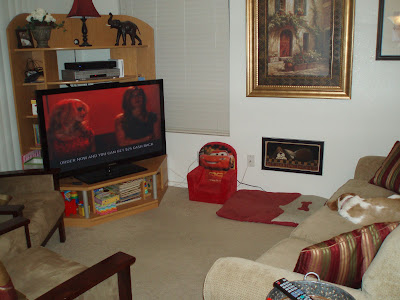 This is the meeting area where heads of State sit together for tea. 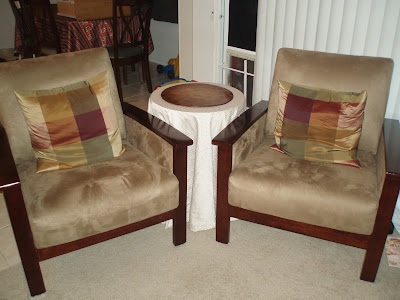 When we moved the entertainment center to the corner we were suddenly left with a huge empty section of wall.  This definitely called for a trip to Kirkland's for inexpensive art.  I'm just in love with what I found.  And it was way, way cheap during their wonderfully timed annual art sale. 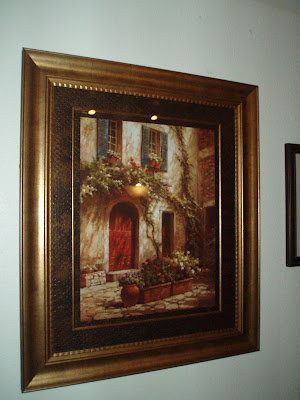 Then we moved some stuff around to make a family portrait gallery. 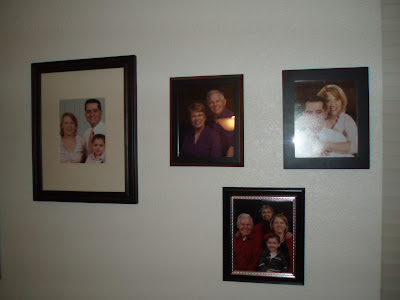 The apothecary jar got some new potpourri.  It looks so nice I might just leave it and not fill it with hearts in February.  Might.  I didn't say definitely. 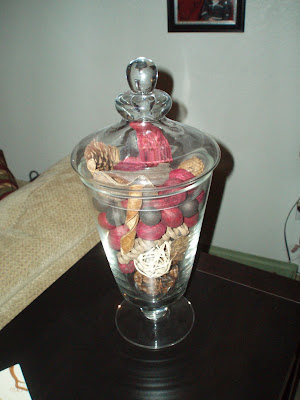 When I was at Kirkland's looking for the BIG piece of art I stumbled upon a set of 4 paintings that were in the "buy this or we're throwing it away pile".  This set was originally $70.  I got it for $13.99.  I didn't even care that I didn't have anywhere to hang them.  That's a deal you don't pass up.  Then I got them home and idea gold struck.  The bathroom!  We could change it from plain white vanilla bathroom to safari animal print bathroom.  Hooray.
It all happened so fast that I didn't even take a picture of the bathroom before.  This is from Christmas.  You can kind of see the shower curtain and the picture on the wall. 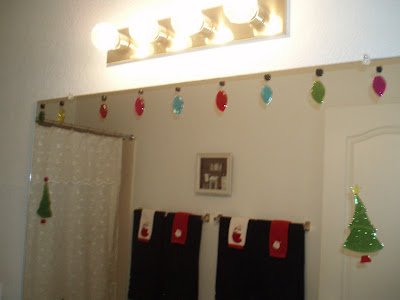 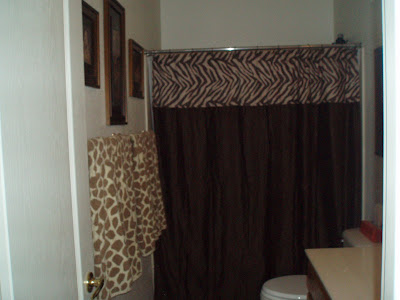 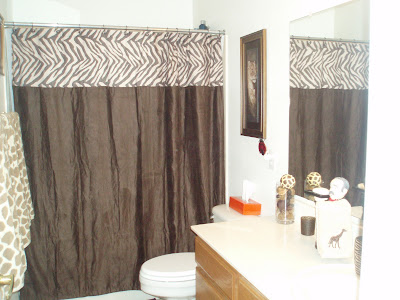 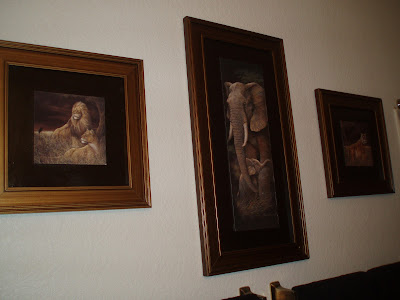 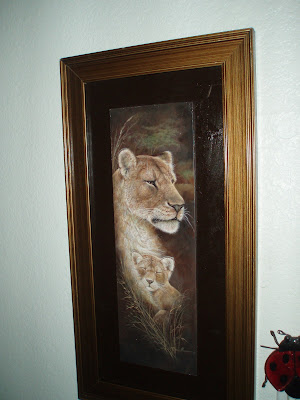 I found the zebra print shower curtain at Stein Mart on sale for $12.  Score. 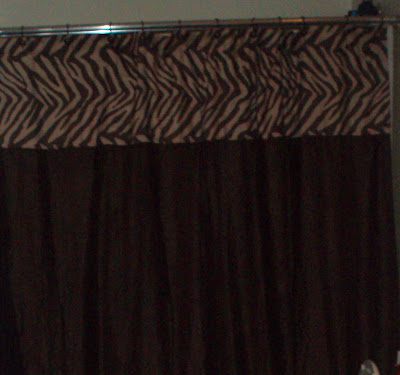 The giraffe print ball was part of the potpourri that I got for the apothecary jar in the living room.  $9 to split into 2 rooms. Score!  The leopard print candle holder was 1 DOLLAR at Hobby Lobby. Score!  The giraffe towel was $3 at Stein Mart.  Score!  And the zebra print soap dispenser was $4 at Ross.  Score Score Score! 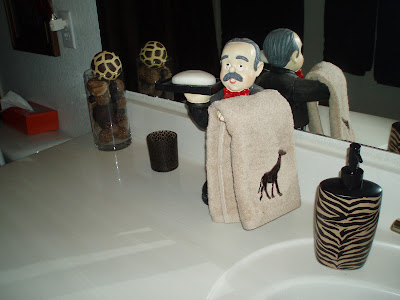 OK.  The leopard print rug wasn't quite so cheap and I bought two.  But they weren't "expensive" either. 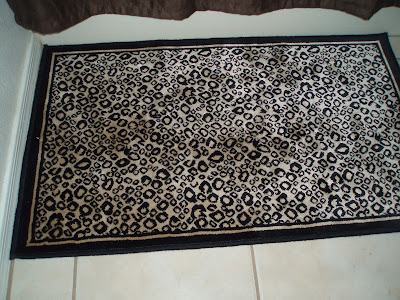 I drove all the way to Mesa to get the giraffe print towels at K-Mart.  Really.  Did you even know that K-Mart was still in existence?  I think it was worth it.  They really tie the room together. 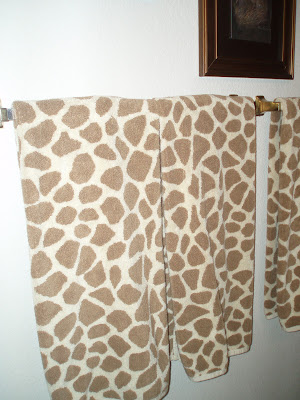 I'm hosting a shower at our house in a couple of weeks.  I'm SO excited to unveil the new rooms.
P.S.  Before we hung it on the family room wall, we took Spencer's 3-year, 4-month picture in front of the new picture.  I think it looks like he is sitting at a villa in Italy. 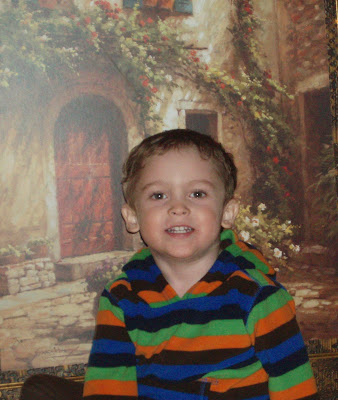 Love it...so glad you drove to Mesa for the towels...totally worth it!

Love the new family room! I especially like how the play area is separated now. Maybe you could figure out how to do that for our family room, especially after Tyler's next birthday when a kitchen is planned for him.

Ugh.
Ok, so I totally love it. All of it. And it reminds me that I have absolutely NO ability to decorate a home. Every now then I think I might... but then, no, I don't.

very cute! and i got your # and i will be calling you sometime after the weekend because we are furiously getting ready to go out of town :) but thank you, so excited to talk!

Look forward to seeing the new arrangments/decor in 13 months.