This was the scene on Thursday at a mall that is 3 miles from our house.  There was a shooting. 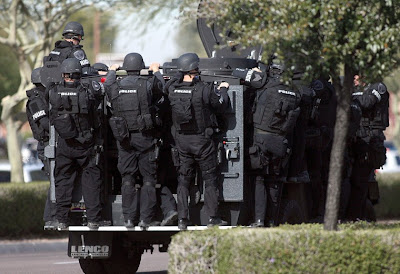 We shop at this mall/the stores surrounding the mall at least once a week.
Ah. Let's be honest.  There is a Target and a Kirkland's there.  I'm there like 3 times a week.  The shooting started by Sears.  The Sears where we have Spencer's portraits taken.  The Sears where we bought our TV last month. 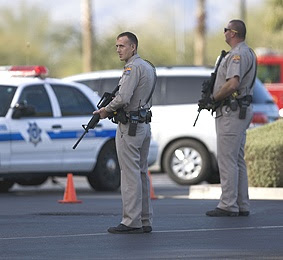 After the shoot out at the mall the shooter ran across the street to a Baja Fresh where hostages were taken.  We eat at that Baja Fresh probably once a month. 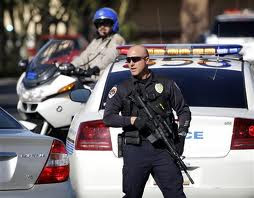 This was all unfolding AS I DROVE BY on my way from work to pick Spencer up from school.  In the time that I waited at a red light I counted 17 police cars/vans/motorcycles driving by to try to shut the street down.  4 helicopters were hovering overhead.  Spencer's school was on lockdown when I got there.  Preschool.  Kids age 4 and under.  Thank God nobody was physically harmed during this shooting.  I'm sure many, many people were harmed emotionally and psychologically though.  Sometimes (all the time?) those wounds take longer to heal. 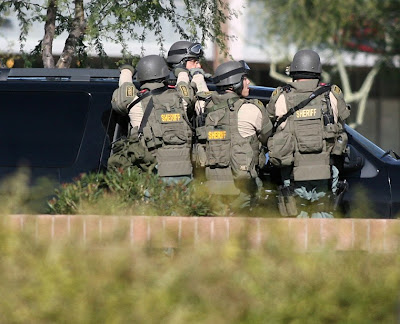 As if that wasn't enough....
An obviously mentally ill young man took a 9 mm Glock to a grocery store in my hometown of Tucson today.  He opened fire, intending to assasinate a U.S. Representative who was there for a constituent meeting.  He shot 19 people. Six of those people have already died.
Congresswoman Gabrielle Giffords was shot in the head at close range.  My dad has worked on 2 of her campaigns and he is part of the committe that picks candidates for her congressional nominations to the U.S. Merchant Marine Academy.  My dad talked to her on the phone this past week. 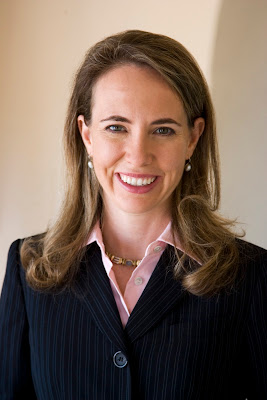 Chief Judge John Roll, of the U.S. District Court was killed.  He is an alumni of my high school and has attended my dad and uncle's holiday reunion parties in past years. 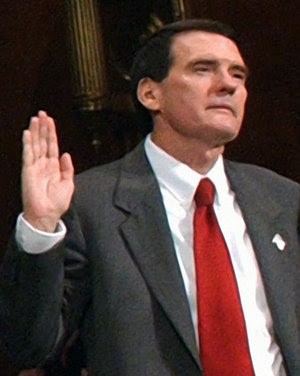 9 year old Christina Taylor Green was shot in the chest.  She was born on September 11, 2001.  Her life began on a day of unspeakable violence.  Her all too short life was ended with horrifying violence. 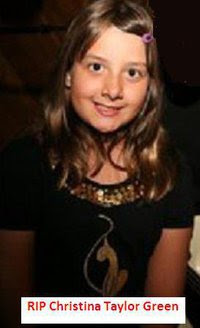 Congresswoman Gifford's community outreach director, Gabe Zimmerman, was killed.  The mother of a student currently attending my high school was shot.  There are many, many more whose names have not yet been released.
What the hell is wrong with people?  You don't shoot people.  It's not hard.  I do it every day.  I go outside and I live my life and, I. DON'T. SHOOT. PEOPLE.
The world has just gone mad.
Posted by Natalie at 11:16 PM

You found words. Good post. Also I think your use of periods at the end is in this case excellent.

Natalie, this is beautiful. I agree with Karen... you found words. I don't have words. This brings tears to my eyes. Because, you're right. It's not hard. And yet, people suffer because some people, what, find it HARD to NOT shoot people. Come on.

Hey Natalie...that's what's so sad, is that it is someone who is not like you and I, or the rest of most of us, who want more than anything for people to be safe around us. One mentally ill person can change so much. I'm glad you're safe.

I am so glad that you're safe. And you said it all.