So, I totally convinced Michael to do the shelves from IKEA/rearrange the entire family room thing.  It's all done and it didn't take long at all, so it won't interfere with the catch up blogging schedule.  The only thing left is to move pictures on the wall and then it will look superb.  Pictures to come.
Christmas Eve morning.
Nathan was flying out to California later in the day, so he wanted us to have breakfast together since he wouldn't be there for dinner.  He gave Spencer his present- a Home Depot tool belt and hard hat. 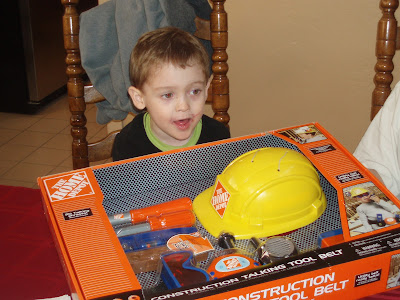 It was, and still is, a favorite. 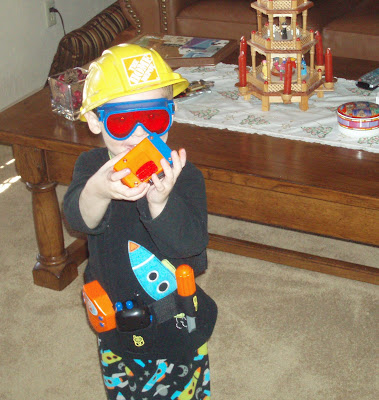 After breakfast I spent the next 5 hours in a car.  We had forgotten Spencer's inhaler at home (I KNOW!  How terrible are we!?), so I volunteered to drive Nathan to the airport in Phoenix so I could stop at home and get the inhaler.  Traffic was horrible going to Phoenix but was better on my way back.  When I finally made it back to Tucson we tried to take a decent family picture. 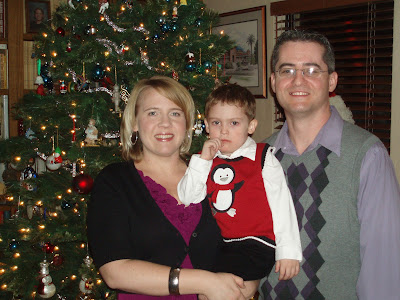 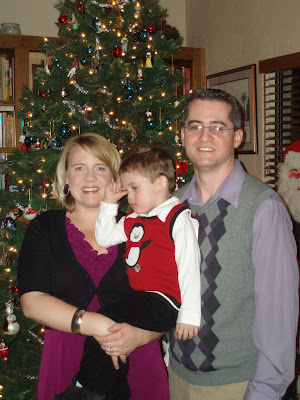 Spencer was happier to be by himself with his Home Depot hammer. 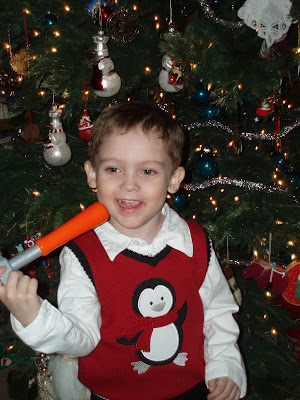 And on the floor. 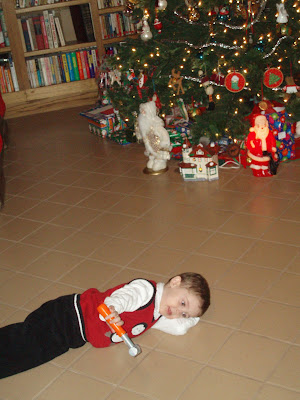 I usually help my mom with the Christmas Eve cooking, but I was stuck in the car all day.  Nick did a marvelous job in my place.  I think I'll let him have the job next year too. 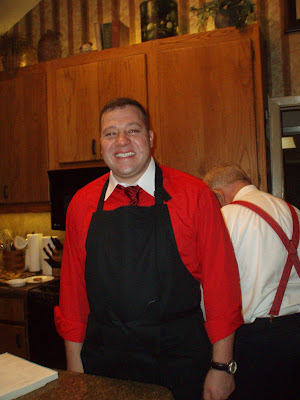 Home Depot continued to be a big hit. 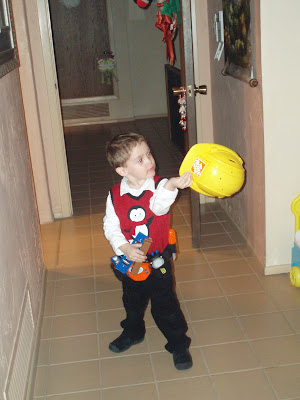 Ginger was forlorn, waiting for a nibble from the humans. 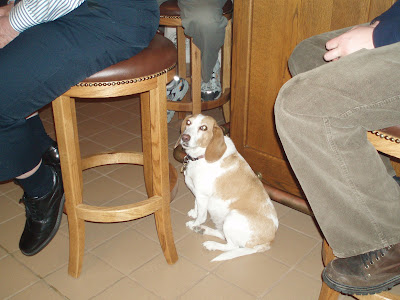 Spencer and Michael got matching baseball gloves from Jerry and Lois.  Broken windows anyone? 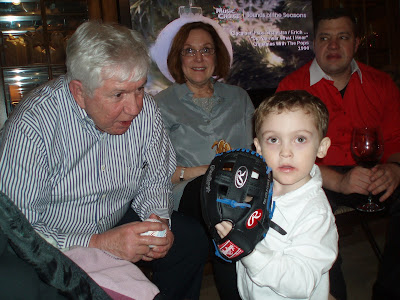 My dad and my Uncle Terry sat around trying to one up each other.  They deny this. 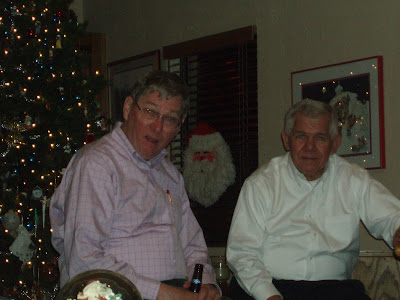 Spencer changed into Santa jammies and then it was time to leave carrots and water for the reindeer.  I learned about doing such things from Chelsea's blog last year.  Thanks Chels.  I almost raised a son without ever doing this important Christmas Eve ritual. 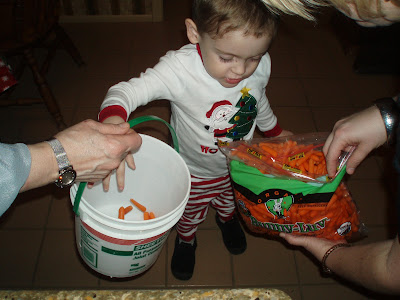 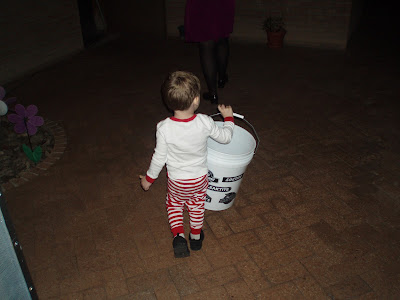 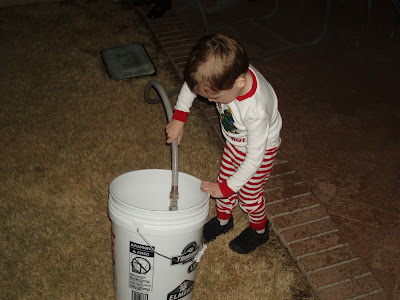 This is my favorite picture of the night. 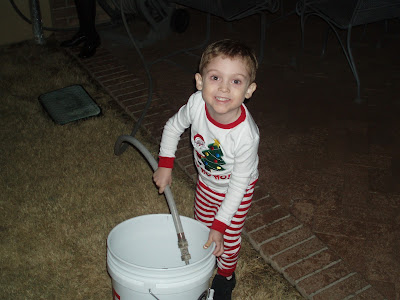 Ginger got the bone from the rib roast. 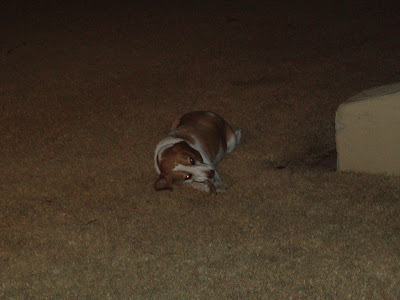 Then it was time to leave cookies for Santa. 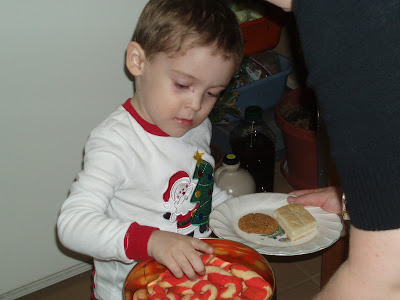 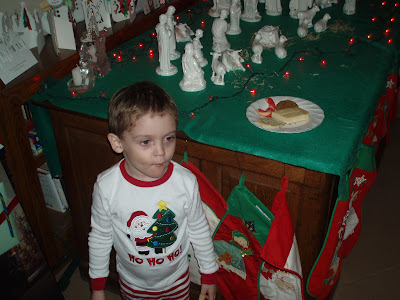 Right before bed we let Spencer eat part of a candy cane.  Eating a bunch of crap was a real theme in our holidays. 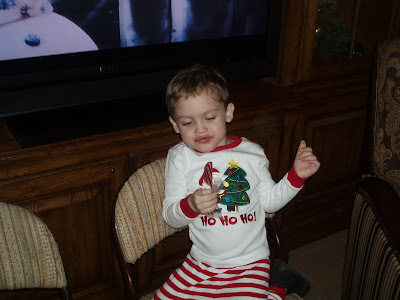 Cute pics of Spencer. I didn't know about the reindeer food thing. Speaking of cookies from Santa, I remember having a very serious conversation with you about how Santa must be real because you left Oreos for him and your dad hates Oreos, so he couldn't have eaten them!

Fun!
Oooh we left food for the reindeer this year, but we totally forgot to leave water. Poor dehydrated reindeer... thank goodness you guys handled the water situation.

I am so loving the Home Depot tool belt and hard hat . . . very cool.

I asked Eliza if we should leave food for the reindeer and she said "Reindeers like cookies" . . . well alrighty then. However we probably should have left them some water . . . there is always next year.