Today was a good day.  It's pretty hard to not be happy on Halloween.  The biggest bummer of the day was that we still haven't closed on the house.  We are *STILL* waiting on the paperwork from the underwriters in Georgia.  At this pace it would be faster for me to drive to Georgia and bring it back myself.
I had to cancel the locksmith for tomorrow.  It's hard to rekey a house when you don't have the keys.  We also had to postpone the start-up of the utilities.  Ugh.  Could I just own this home already?  I did go ahead and buy a new welcome mat for the front door.  I have confidence that I'll be able to put it down very soon.
Elliott wore his My First Halloween onesie today.  He was cute, but that's to be expected. 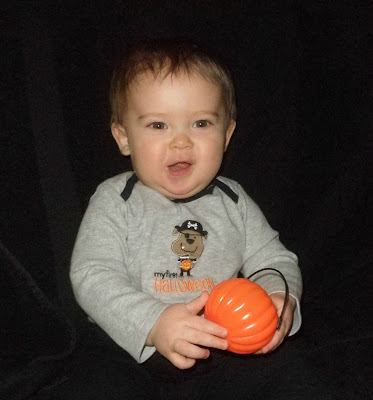 Spencer wore his new Halloween shirt today.  He wore his old one to school on Monday.  It's the same shirt he's been wearing since he was 2.  I washed it and it's finally going into the clothes box for Elliott.  It still fits Spencer, but the sleeves are ridiculously short. 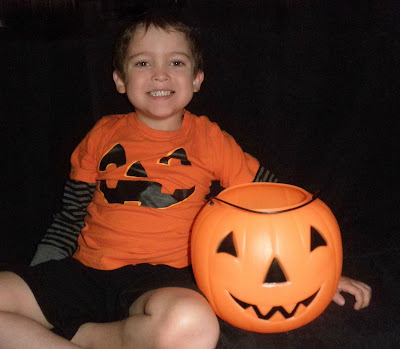 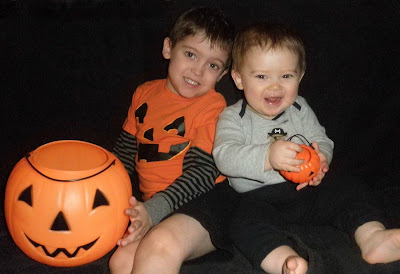 My sister in law is in town.  She had an interview at the Mayo Clinic today.  Kendra is close to being done with her oncology fellowship and hospitals around the country want her.  Since we didn't have to be out signing paperwork and since Kendra's hotel is a good hour drive from our house we decided to eat dinner at home instead of going out.  We went to Fresh and Easy to get some stuff.  When we got home we got the pumpkins out into the driveway. 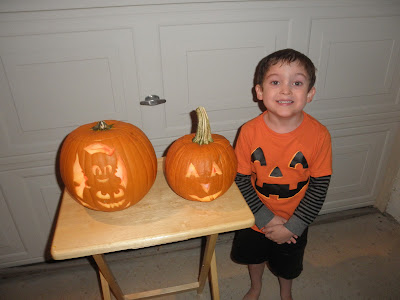 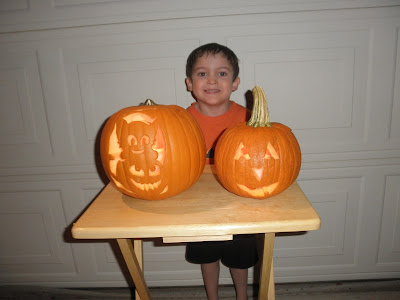 We had a quick dinner and then it was time for costumes.
Elliott was the world's most adorable Winnie the Pooh.  He even had his best friend Piglet. 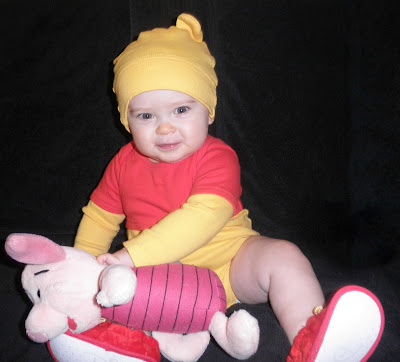 Spencer was a very convincing Elmo.  He got lots and lots of comments on his costume tonight. 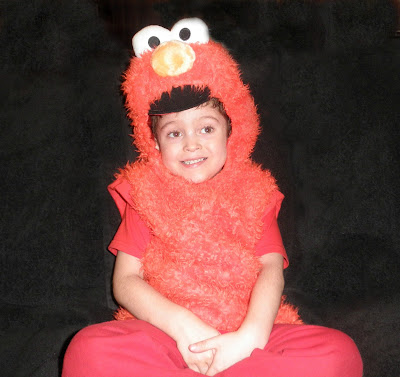 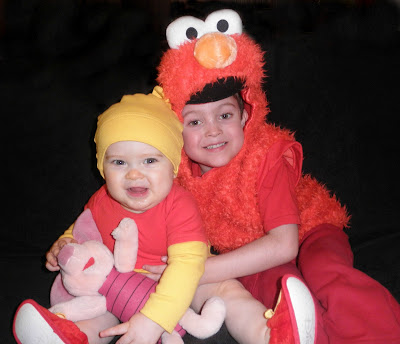 Kendra dressed up as an Aunt. 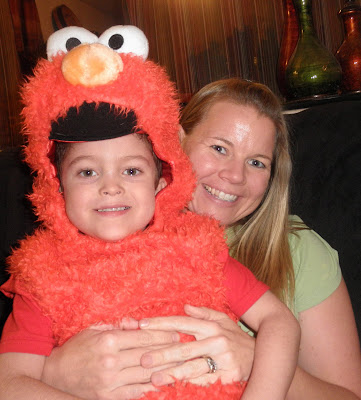 I forgot to take any pictures of the actual trick-or-treating until the very end.  This was like 4 houses from ours and we had been out for an hour.  Spencer had much more endurance last year.  I think he wasn't as hot (that Elmo head is toasty) plus his asthma is really bad right now. 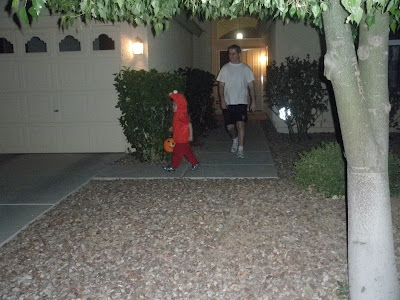 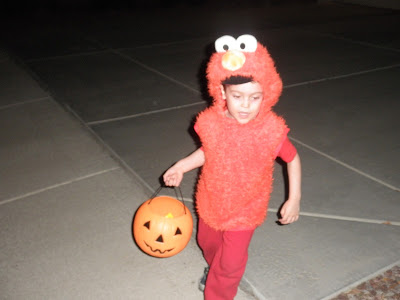 I took this picture and then I was disturbed because Kendra looks like the mama. 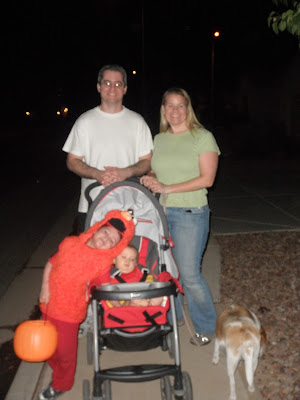 I wore that orange jack-o-lantern shirt to work on Tuesday.  I ended up being in meetings with parents all day.  Professional, huh? 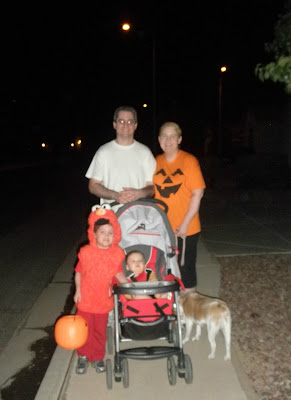 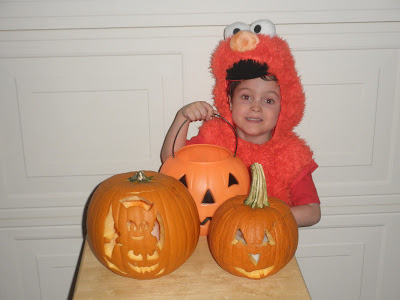 Auntie Kendra being an aunt. 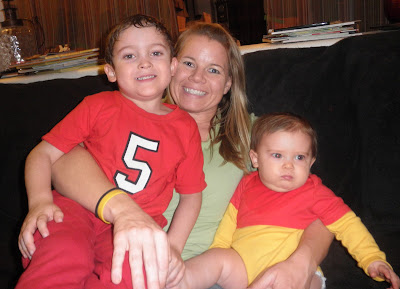 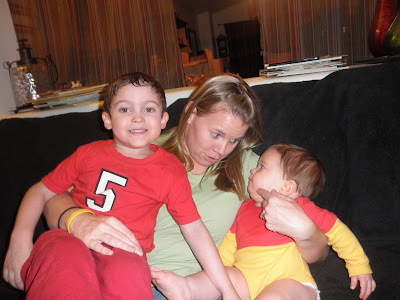 Elliott was less than impressed. 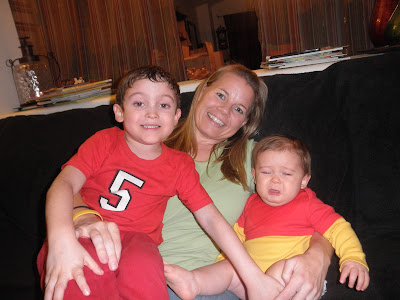 We're happy to report that Spencer now calls her Aunt Kendra and not Uncle Kendra or Aunt Kenja. 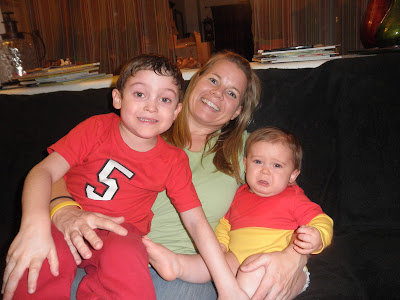 One last look at the pumpkins before they go in the trash. 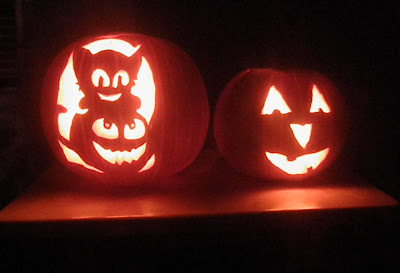 Spencer's loot.  He was a happy kid. 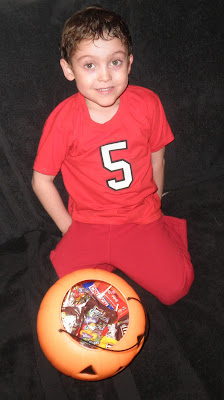 Awww, glad your sweet boys had a fun halloween! Hey, Elliott, I really like Winnie the Pooh and could really use one of those Pooh bear hugs! And Spencer, you make a very cute little red monster! Natalie, that last part was just cruel...can't we just enjoy Thanksgiving and Christmas before we rush into the New Year? ;-)

The boys looked so cute! I especially love the pic of Elmo hugging Pooh.

I meant to mention it in your previous post, but kudos to Michael for his excellent carving skills. I'm always so sad to have to chuck the pumpkins right away (it's not like colder climates where they can survive outside for a little while). I keep it inside for a day or so (just until it starts to look like a middle aged chain smoker) and then we throw it out in our "backyard" for the bunnies, etc.

Phew, I am now less than 2 months behind. I read your comment about NYE being two months away and since I'm so behind, guess what, it's now 1 week away. Love how I'm reading about Halloween at Christmas time, but at least I'm finally catching up. :)