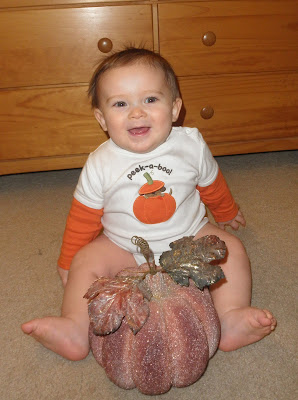 Weight/Size
We put Elliott on the bathroom scale on Sunday.  He was fully clothed, had a diaper on and had just eaten.  He was 22 pounds.  He probably weighs a little bit less naked.  Spencer was 21 pounds at 12 months so baby brother beats him again this month.
Elliott is still wearing a size 3 diaper.  He fits in anything from 6-12 months (Gymboree) to 18 months clothes.  He has some 18 month onesies that are roomy on him.  18 month outfits or pants are way too big.  12 month outfits are just right. 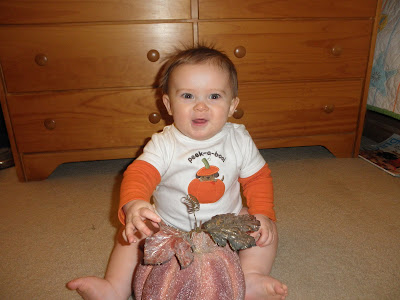 Sleep
We went cold turkey on the swaddle a week and a half ago.  Things are going better than I expected.  Elliott enjoys the freedom of being able to roll around.  He loves sleeping on his tummy.  He is easy to put down after rocking to sleep at night.  Naps are harder.  He usually wakes up the first time I put him down.  Sometimes I try 3-4 times before I just lay down on the bed with him and then try to sneak out later.  Elliott takes 1-2 naps a day.  A short morning one and a longer afternoon one or a long mid-day one.  His schedule has been all over the place since Spencer has been on Fall break.  He sleeps all night (and naps) in the co-sleeper.  We nurse around 5 and then he's back in the co-sleeper or he cuddles with me.  He doesn't sleep as well with me as Spencer did.  Spencer needed my left arm to sleep.  I think I bother Elliott more than I settle him sometimes.  We did have a glorious early morning cuddle that lasted 3 hours last week. 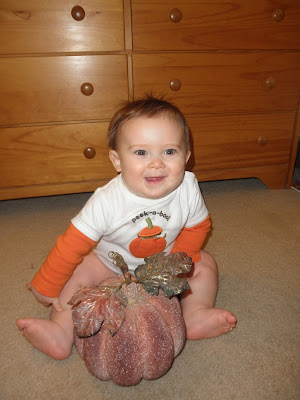 Movement
Elliott can pull himself up. He can hold onto the train table with one hand while playing with something with the other hand. He can side step along the table while holding on. Elliott can crawl in a circle and can crawl backwards, but he still hasn't figured out how to move forwards. He is feeding himself all sorts of food.  He's got a pretty good pincer grasp. 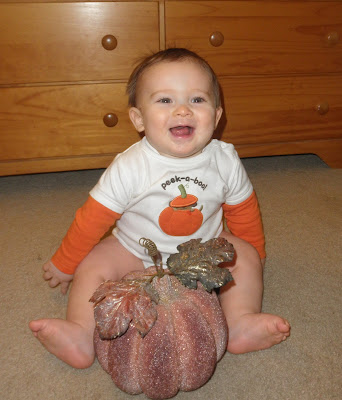 Communication
Elliott is babbling up a storm.  He totally sounds like he is talking, except there are no true words.  His prosody is spot on though.  The other day he was nursing and Spencer yelled to Michael across the house and Michael yelled back to hold on a minute.  Elliott stopped nursing, looked at me and said Dada.  He hasn't done it since though, so maybe it was just coincidence.  Elliott is starting to respond to commands.  When you tell him to give you kisses he leans forward and opens his mouth for a wet, slobbery kiss. 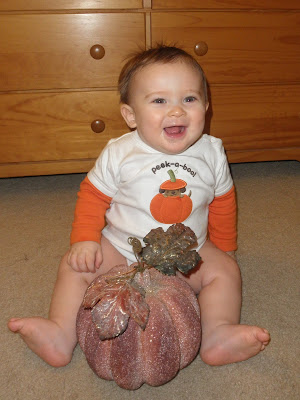 Sweet Remembrances
1) Going to Kathy's second 50th Birthday party where Elliott was a super star.
2) Finding out that we got the house of our dreams where Elliott will live until he moves into his first dorm room.
3) Going out to dinner a couple of times where we actually ordered something off of the menu for Elliott.
4) Spending time with all 4 of his grandparents.
5) Going to Tucson (although the actual driving was anything but sweet).
6) Going to the photo studio for 9 month pictures, pictures with grandparents and Fall pictures of brothers.
7) Buying Elliott's first Halloween costume.
8) Having friends over for dinner several times. 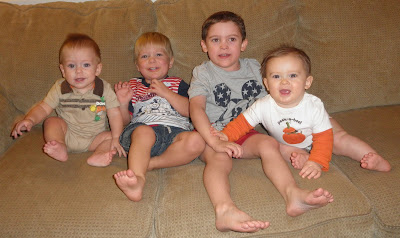 Food
In the last month we have added grapes, shredded/cubed cheese, cottage cheese, pasta and pumpkin. We have tried to do flounder (white fish) twice. It's in the freezer, I just can't seem to remember to cook it for him. He is eating such a variety of stuff that I don't feel such a pressing need to add new foods every 4 days. He is a great eater. He loves to eat. His tubiness is proof of that. He drinks water out of an open cup. He is a water fanatic. He flips out whenever he sees us drinking anything and screams until we give him something to drink too.
Elliott is nursing 4-6 times a day.  It's great.  This is the part of nursing that I love.  He's not dependent on me to completely stay alive and nursing is our special, cuddly time.
I made pumpkin pancakes (without eggs) for breakfast today. 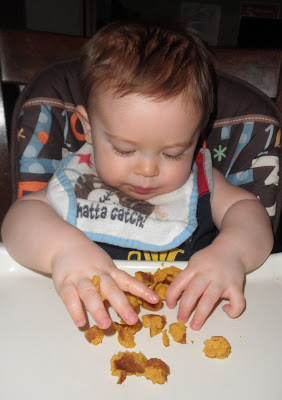 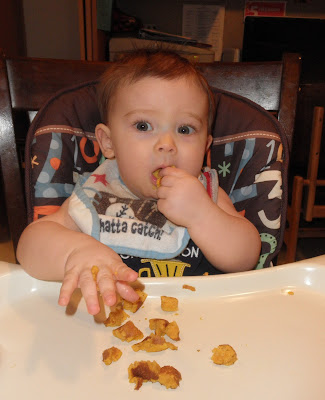 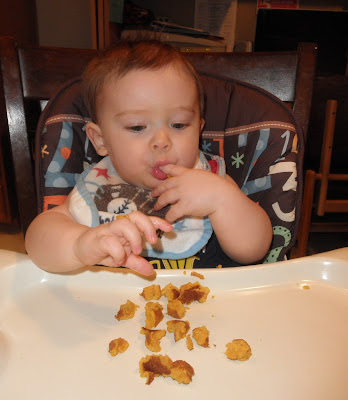 Mood
Happy guy! Except when he's riding in the car to Tucson, apparently.
Elliott has definitely developed stranger danger. He gets upset when people come over that he doesn't know. He cries and cries and then eventually gets used to them being there and is fine. Silly boy. 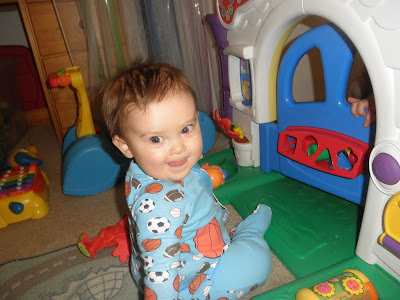 Medicine
Just Vitamin D drops. I can't believe it. After all of the antibiotics, antivirals, antiseizure and liver medications, Elliott is medicine free. We stopped his Zantac about 2 weeks ago and he has been fine. He spit up/threw up all over me right after he finished nursing this morning, but except for that he hasn't spit up in months.
Interestingly, with all the medication that Elliott has taken in his life, he has never had a single dose of Tylenol or Motrin.  He's never needed it.  Except for when he spiked a fever before we were sent to the PICU, he's never had a fever. He also hasn't cut any teeth yet, so he's not having teething pain. 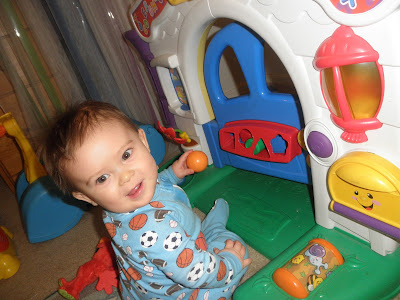 Likes
Drinking water.
Eating/Feeding himself.
Standing at the train table and banging things.
Playing with his leap frog table.
Newfound freedom to roll around during sleep and sleep on tummy.
Going for walks. as long as he's not in the stroller at night.
Going out to eat and checking out all the people.
Playing with his little house and ringing the doorbell on it. 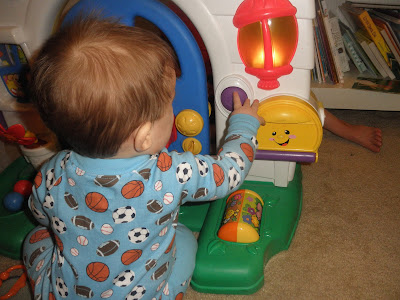 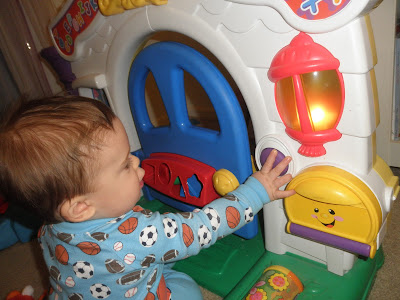 Dislikes
Being manhandled by his big brother.
Being strapped in a carseat for 105 minutes on the way to Tucson.
Being put down in the co-sleeper before he's ready.
Strangers. 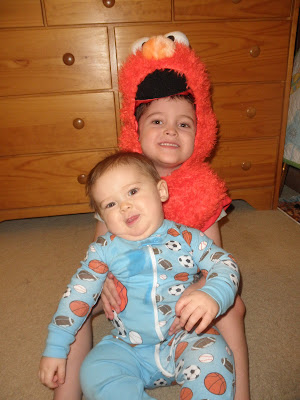 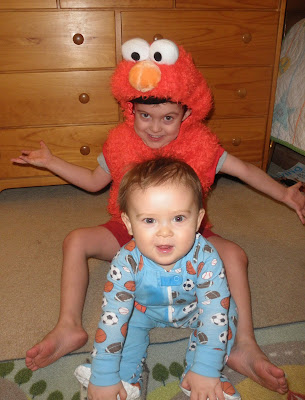 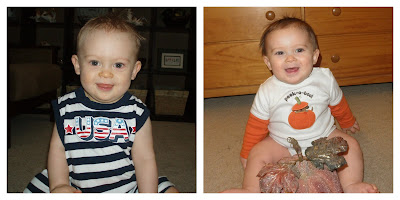 So missing your big guy!

He weighs about a pound less than my full term, formula fed, 19 month old! :)

Awww, you're getting so big, Elliott! Soon you'll be able to manhandle your big brother! ;-)