Halloween is in 11 days.  Spencer is excited to go trick-or-treating.  I'm excited because we close on the new house the day before Halloween!
Halloween preparation at our house:
The boys got matching monster shirts. 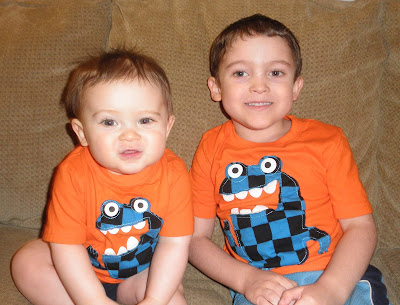 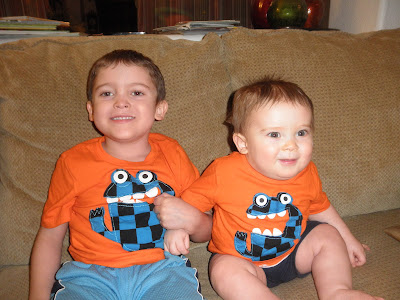 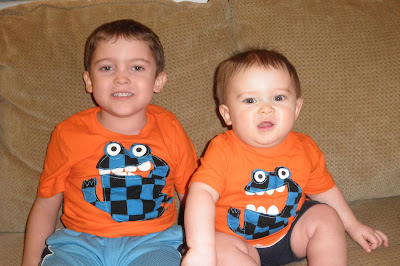 Spencer and I made a Q-tip skeleton. 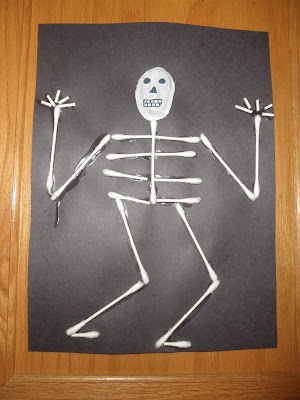 Spencer has a costume.
I convinced him, again, that he didn't really want to be a garbage truck.  Last year I told him we'd do it this year because last year I didn't want to make a garbage truck costume since I was pregnant and tired.  This year I genuinely think he would be miserable walking around in a box all night.  He thought about it and agreed.  We went to Target to look for costumes and he fell in love with this Elmo one.  He's worn it every day this week. 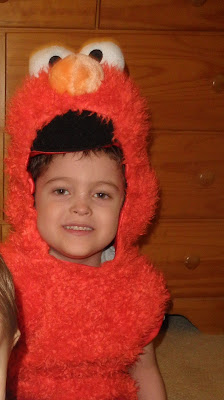 Elliott has a costume.
He's going to be Winnie the Pooh.  They have similarly shaped bodies. 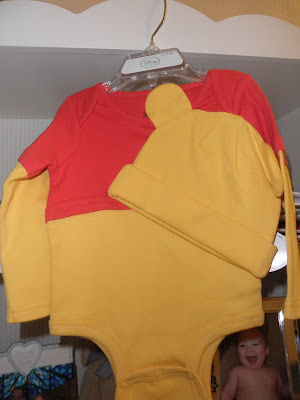 I doubt that Winnie the Pooh would actually wear slippers with his own image on them, but, whatever. 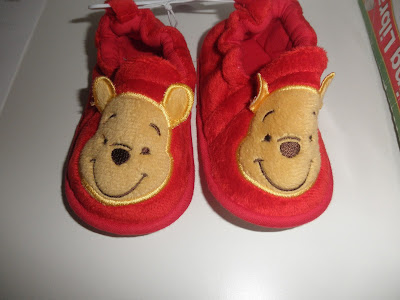 Elliott also has a "My 1st Halloween" onesie.  I saw an actual high temperature in the 70's (nevermind that it was 79) on the 7 day forecast, so he might not burn up in long sleeves. 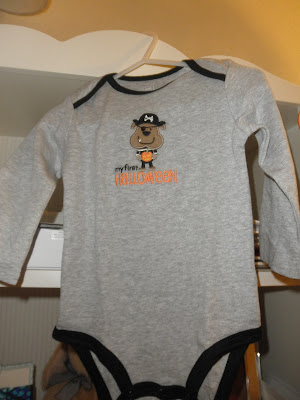 We made footprint ghost art.  It's not a holiday without footprint art. 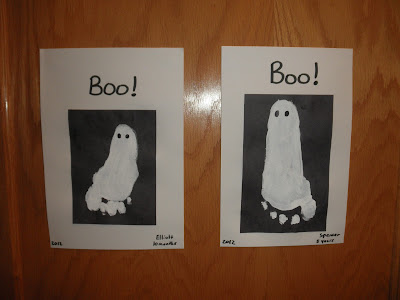 Sorry, there were too many errors in my previous comments from trying to type on my Kindle. Ugh!

You can tell you're a teacher of sorts although Pinterest might have lent these ideas but the artwork is so cute. Brody's teacher actually showed me an example of an art project they were doing...feetprint ghosts! I'm so excited to see it after seeing yours. I totally need to do an artwork/schoolwork post soon. Those are some cute shirts...I have an affinity for monsters! Evan's old Halloween shirt has a Frankenstein monster on it that says Daddy's Lil' Monster. He can still wear it of course! Mine have the Gymboree happy spider shirts and so far have worn them on different days. Hopefully since they don't say Halloween, they can wear them after Halloween too.

On a more important note, guess who I dreamed about last night? Yes, I am officially a psycho. Ha! I dreamed we were at your new house welcome party out on the patio which was truly awesome by the way (although maybe slightly exaggerated in dream state...haha!). We met, and it was not weird at all...although this dream may definitely be classified that way. Spencer and Evan had an immediate attraction and started playing and running around as wild 5 year old boys do. Brody, as usual, had fallen asleep, but Elliott was happy as usual and was bigger than Brody...cute little tubs! He very nearly is as big as Brody so this is no surprise! ;-) Anyway, we have met now if only in my dreams, and it was wonderful. I'm pretty sure Michael and Eddie were hitting it off as well. This is truly destined to happen one day. I just know it. Twins have to meet! :-)

I love that Spencer is casually physically restraining Elliott in the second picture. Also, whenever you do a holiday related craft I think, "Ellie and I should totally do that!". And then I promptly forget.