We had a great weekend in Tucson honoring the dads in our lives. We went to dinner at Nathan and Kendra's house on Saturday night. I'm going to do a separate post about that though.
See, now you have something to look forward to.
On Sunday we started out the day at Michael's parents' house for a deluxe breakfast and some gift opening. My dad was at a conference in Phoenix and didn't get back until Sunday afternoon so he wasn't around for the A.M. festivites.
Remember, this was last year- matching Raiders shirts. 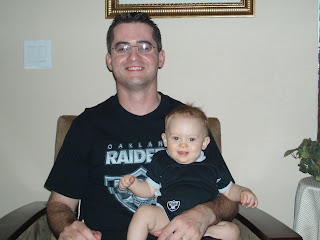 This year was matching U of A shirts and jean shorts. 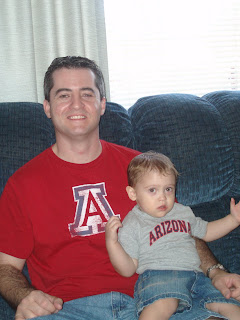 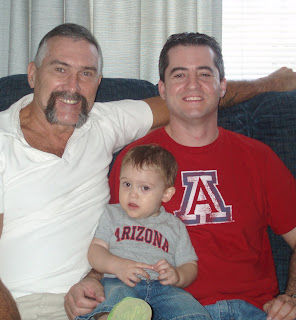 Raymond just had his ankle operated on, so he's stylin' with a big, blue cast this summer. Just looking at it made my leg itch. 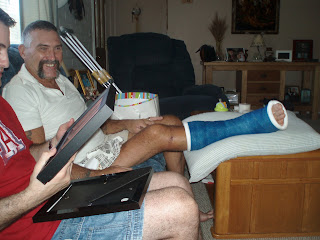 After breakfast we went back to my parents house and forced Spencer to take a nap. The dogs, on the other hand, needed no prompting to take their nap. They looked like this all afternoon. 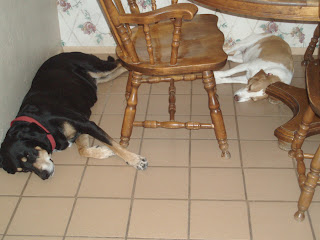 My brother turns 28 today. For the next 10ish weeks it will appear that I am only 1 year older than him. Then, I will turn (gulp) 30 and we'll go back to a 2 year age difference. I made some fancy cupcakes for all the celebrations. Dads and birthday boys got their initials on a cupcake. 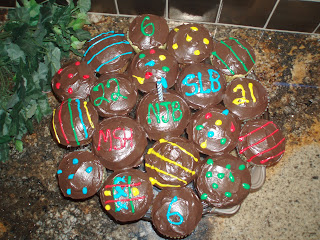 My wayward father finally returned in the afternoon and donned an ove glove while manning the grill. 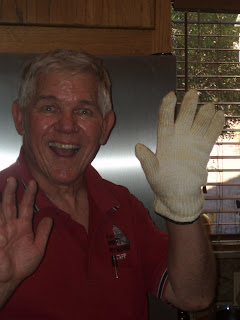 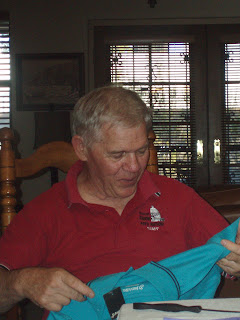 We couldn't find a 2 and an 8 candle in the supply of used number candles (and my mom said it was ridiculous to try to make a math problem out of a 2, a 5 and a 3), so Nick got a solitary stick candle on his initial cupcake. Thank god he had the lung capacity to blow it out. 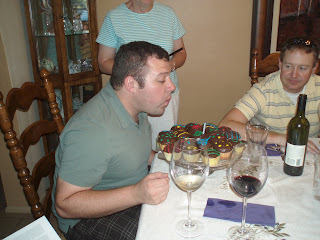 Looks like you guys had a great time. Your family needs some more girls. You and Michael need to get on that. Just kidding.

Nice job on the cupcakes!