Should I be really pissed at my curious 2-year-old for doing this? Or should I sigh really loudly, take pictures, clean it up, put him down for a nap and then blog about it? I think you can figure out that I just recently sighed really loudly. And that Spencer is now sleeping. 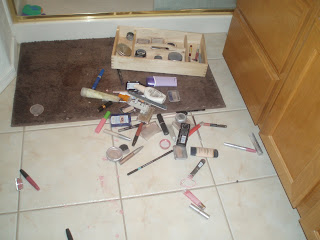 He didn't just take the make-up out of the organizer. He actually knocked the entire thing off the bathroom countertop. It made a loud crash. He said uh-oh. I get to buy new blush now. 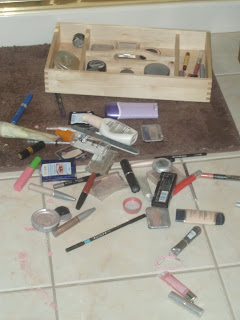 Totally unrelated, but amusing never the less. Apparently Ginger is made out of 90% beagle and 10% day-glo. 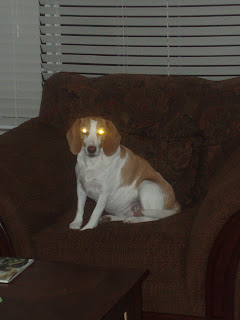 She looks simultaneoulsy evil and cuddly. 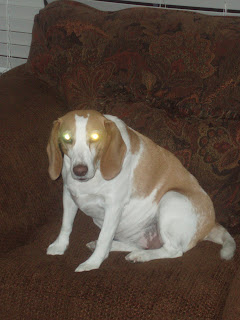 Spencer had his 2-year check-up this morning. He's 27 pounds 1 ounce and 34 1/4 inches. He only gained 1 pound 1 ounce since he was 18 months but he did add 2 inches. He got his 4th and last haemophilus influenzae type b shot. I think he trusts me about 60% less since I was face to face with him while they thrust that needle in his leg. Childhood is so hard!

Oh boy, what a mess.

I think Ginger may be haunted. ;)