The Story of Spencer's Birth
I really should have done this last week before the birthday weekend, but there were some issues with child care and I had a mini nervous breakdown (I'll blog about that later this week) so I never got around to writing it.
August, 2007. I was not very good about taking belly shots when I was pregnant. This was supposed to be 2 months before Spencer was born but it ended up being almost exactly 1 month before he was born. 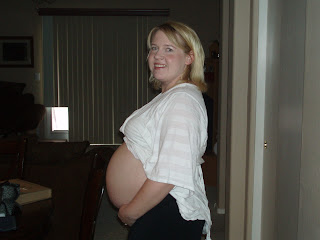 On Sunday, September 2nd we had Josh and Amy over for dinner. I made fondue. "The baby" was moving around a lot that night. We had a long talk about what we were going to do during our last month as non-parents.

On Monday, September 3rd (Labor Day) we took some belly shots of me with the Spencer blocks on my tummy. They were supposed to be practice shots for the real pictures we were going to take closer to my due date. I don't share them because they are awful. Gross stretch marks. I will, however, share the pictures we took of Ginger with her Ginger blocks. 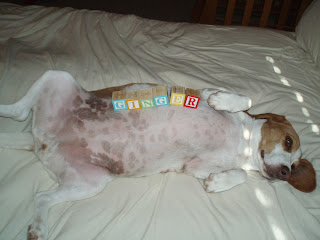 Tuesday, September 4th. My first day of work at my new job. I had been at home napping for the entire month of August waiting for that job to start. I came home and told Michael that I felt bad, was in a lot of pain and that "the baby" wasn't moving as much as usual. I debated calling the doctor, but sat down and did kick counts which convinced me I was actually fine. In hindsight, I should have called the doctor. He wasn't moving as much because he had dropped and labor was starting.

Wednesday, September 5th. My 28th birthday. We woke up at our usual 5 am and I told Michael that I just couldn't walk Ginger with him because I was in too much pain. It was the first walk I ever missed. When I say I was in pain, I don't mean having contractions pain. It was just a general, all over, sort of aching pain. I went to work, came home early, took a long nap and then, when Michael came home, we went out to dinner.

At dinner my water broke. This was a full month before my due date so I was convinced my water didn't break and it must be something else. We went home, I talked to a bunch of people on the phone (it was my birthday afterall) and I complained about how swollen my feet were.

At about 10 pm I was still not convinced that my water had broken but something was definitely going on, so after talking to my doctor we headed to the hospital. Keep in mind I still had not felt a single contraction. We were CONVINCED we were going to be sent back home, so we didn't bring a bag. Mistake number one. I didn't come home for 3 days and then it was with a baby. A bag full of my stuff would have been nice.

We got to the hospital around 10:45ish and I was checked out by the triage nurse in the maternity wing. As she so casually put it, "oh, yeah, your water broke and you are dilated 4 centimeters. You'll have this baby by the morning." That was when I developed tunnel vision and went deaf for about 10 minutes. It was also when Michael lost his dream of being able to say "3!.... I'm dilated 3!" ala Ross from the episode of Friends where Rachel has her baby.

They did an ultrasound to make sure "the baby" was head down and then they admitted me. An hour later they checked me again and lo and behold: 6 centimeters. I didn't start feeling contractions until I got to 7. Totally bizarre. Somewhere in there Michael called my parents and broke the news that they had to get up in the middle of the night, drive two hours to our house to get some stuff for me, and then come to the hospital.

At around 4 am the devil woman anesthesiologist on call came to do my epidural. She finally got it right on the 5th try. I was squeamish about having 1 hole drilled in my spine. Can you imagine how I felt after 5? That whole process was way worse than any other part of the birthing experience. Justice was served though when she billed my insurance incorrectly and they refused to pay her and sent her a letter saying they would sue her if she harassed me or them about the bill again. Ha Ha devil woman.

Here we are around 7 am, Thursday September 6th. 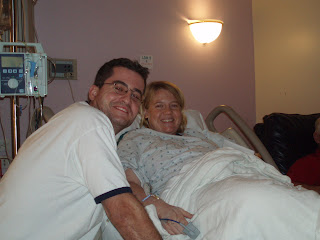 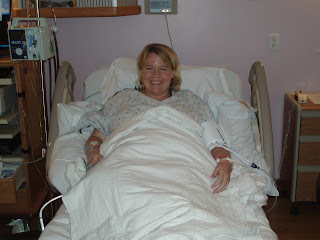 Why is my mother always cold? 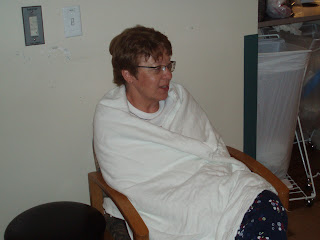 And why is my father always sleeping? 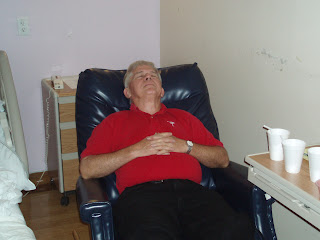 And where are Michael's parents? VERMONT. They were so excited to finally be present for the birth of a grandchild and they were on vacation on the other side of the country.

So, at about 11:50 my nurse informs me I am ready to start pushing. We needed a few baby essentials that had not yet been purchased (like a crib mattress) so we sent my parents off to Babies R Us. I was told that first time moms usually push for an hour and sometimes up to 3 hours. We told my parents to come back around 3ish.

At 12:08 I started pushing. I pushed 3 times and then the nurse screamed at me to stop and got on the phone to call the doctor. At 12:11 pm with no help from me whatsoever, little, tiny, mini, premature, 5 pound 15 ounce Spencer Nicholas popped into the world. There was no one there to catch him. We literally had to yell for someone to help. I think my doctor finally made it like 20 minutes later.

This is Spencer's first picture. Can you see his little scrunchy face in the corner? 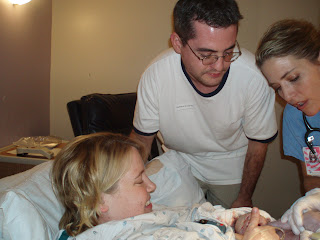 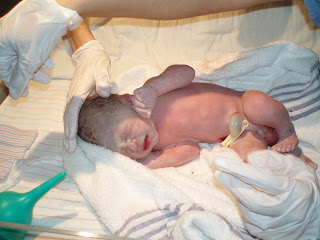 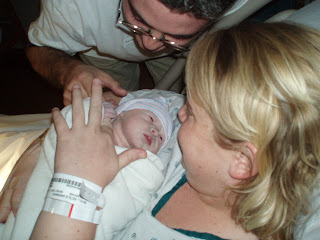 He cleaned up nicely. 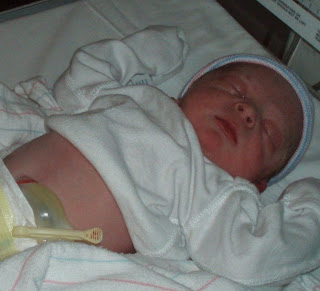 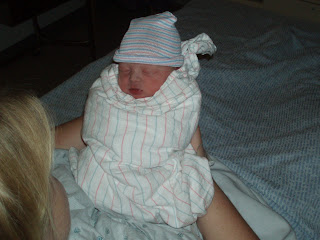 This is the face of a woman who had actually already picked out her outfit for work that day and was just starting to think about weekend plans when she was told that motherhood had arrived 30 days early. 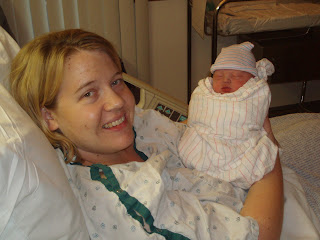 One of my favorite pictures of all time. 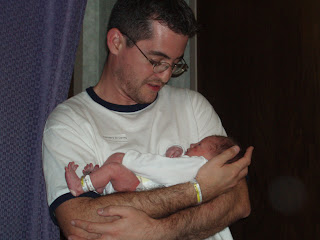 2 days later we took this little bundle home with us. It would be another 2 weeks before he started crying and didn't stop for 4 months. 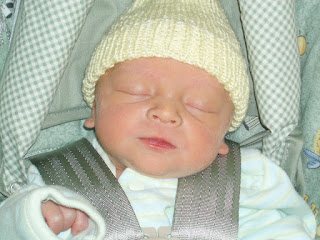 Look at us. We have no idea what we're doing. 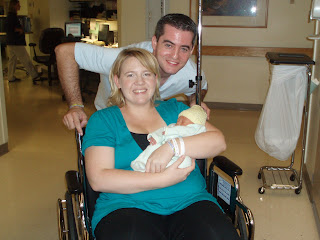 And that, my friends, is the story of Spencer's birth. I should visit high schools and tell this story. The teen birth rate would fall dramatically.

Thanks for this post Natalie! Since I have been pregnant I love hearing everyone's labor stories - is it some kind of sickness? :) I am sure it was a shock to have him 4 weeks early but at least you go to take him home. All the other people I know who had babies that early, the babies had to spend at least a little while in the NICU.