I was so happy when we found our house because there was nothing that needed to be done.  It was totally move in ready.  We wanted to paint, but that was it.  We could live here for years, and years and years without doing anything major.
Then we moved in.  And started noticing little things.  And we started making lists of things to do.  New ceiling fans, new light fixtures.  Little things like that.
Then we started thinking about re-doing the hallway bathroom.  You know, years into the future.  But then it became my obsession.  So I saved up a bunch of money and we started 2 weeks ago.  Just randomly.  At 8 pm one night.
First things first.
The hideous sliding shower doors must go. 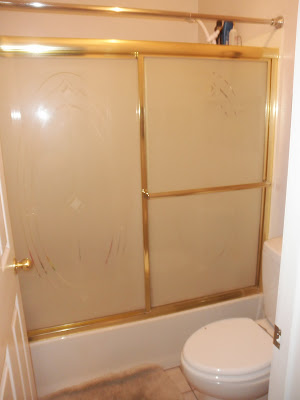 Our house was build in the mid-90's, but somehow they got shower doors from the early 80's.
We removed the doors, 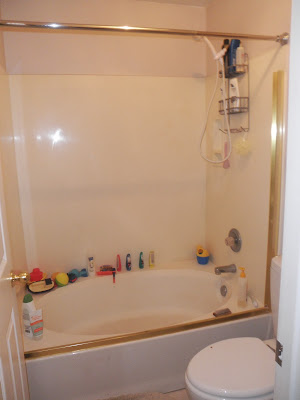 and then popped off the track. 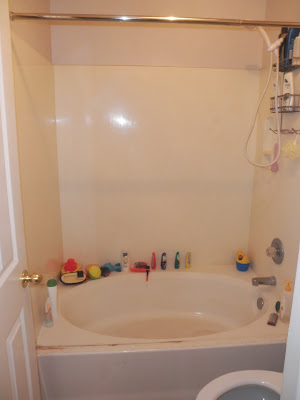 This left a whole bunch of yuck and even more glue and caulk. 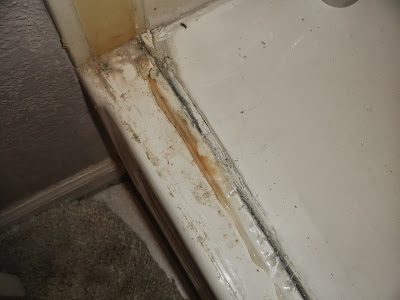 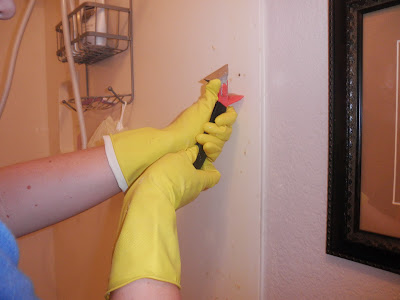 I got most of the adhesive off, but the track left a pretty noticeable stain. 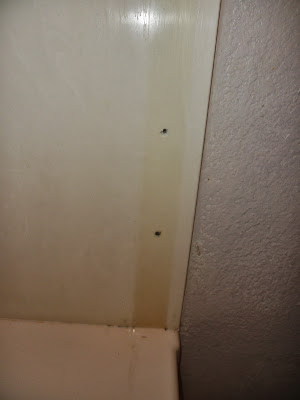 Back to Home Depot for the 765th time to buy some decorative tile. 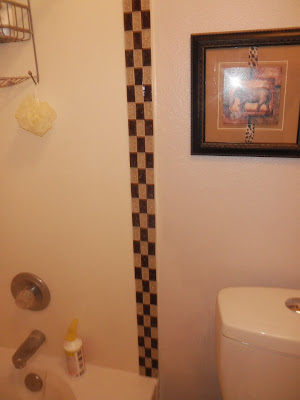 We just glued it on with glue appropriate for the shower.  We're worried that some morning in about 3 months we'll wake up to 100 broken tiles on the floor. 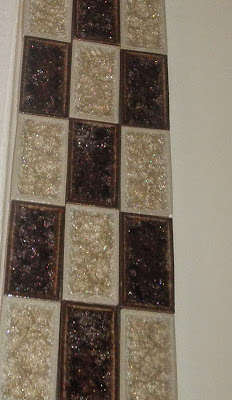 But for right now, it works. 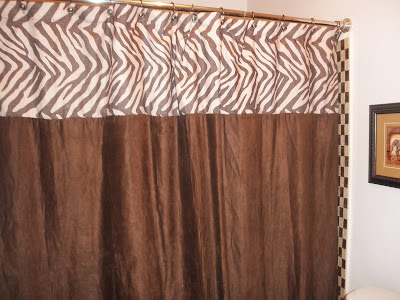 Up next: bye bye standard builders mirror.  Luckily it popped right off and left no damage to the wall. 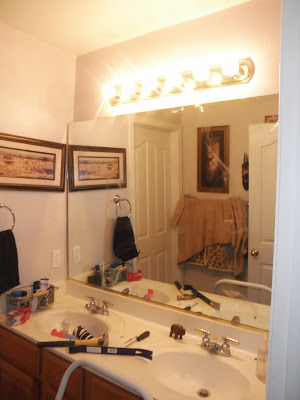 Then we started painting.  The color is Benjamin Moore Jackson Tan.  We had it in the living room, dining room and part of the kitchen in our first house. 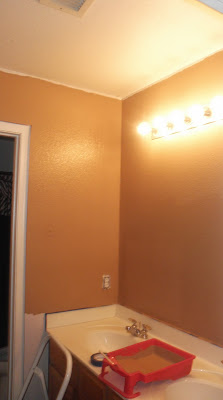 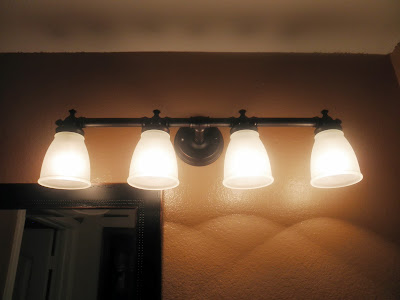 The faucets.....not so much.  Turns out that all the "underneath" plumbing is corroded and needs to be replaced.  It's not a super expensive job, but it is going to take a bit of time and some special tools that my dad didn't bring with him.
These are the faucets that remain in the box. 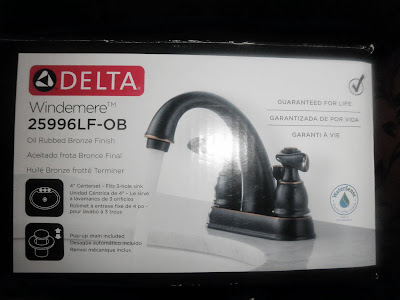 We were going to buy a new medicine cabinet, but apparently ours is a really weird size that can no longer be purchased, so we'd have to cut more wall to replace it with a bigger one.  For now we just spray painted it black until we figure out a more long term solution. 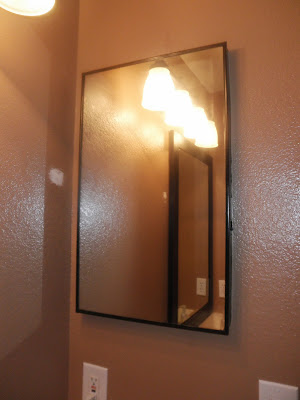 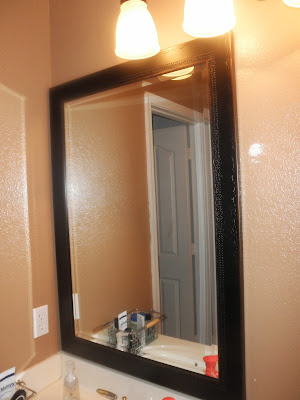 All I have done for the last week is buy and return mirrors to Kirklands.  First I bought them right before they went on sale (and that's not OK.  I'll take my $7 please) and then one of them had a big white scratch.
This is a close-up. 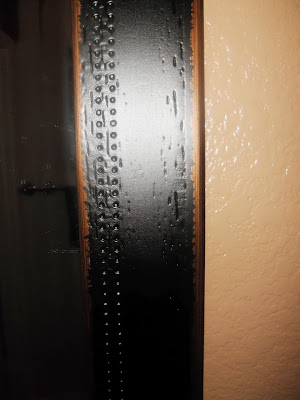 When my dad came up yesterday he brought my grandma's couch with him.  We put it in the living room.  I think it looks nice. 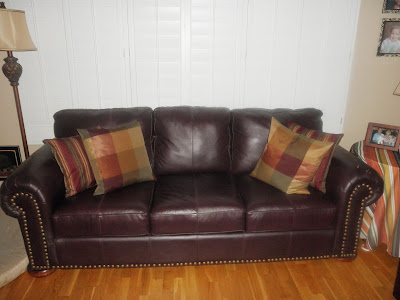 But that meant we had to move our couch out of there. 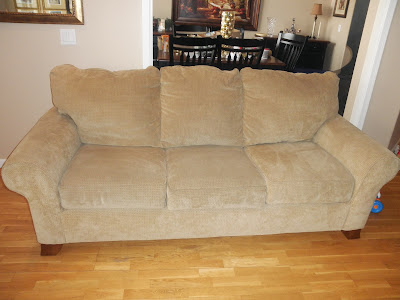 We moved the recliner to the other side of our bedroom and put the couch in there.  It looked ridiculous.  Much too big for a bedroom.  So we decided it had to go. 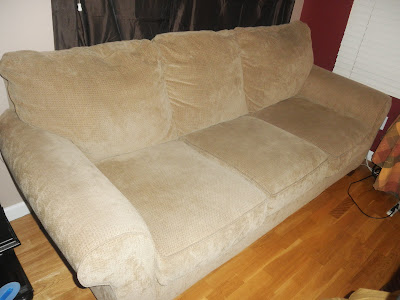 I listed it on Craigslist and sold it within an hour.
Since my dad was there I decided to take the profits from the couch to buy a new light for the entry way so my dad could install it (since he couldn't do the faucets) before he left.
See that little recessed light?  It's just begging for a pendant. 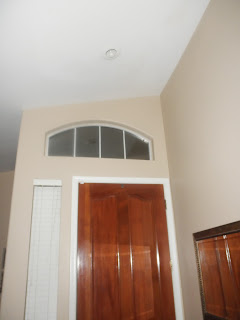 Back to Lowe's for the 9 millionth time.
This is what I bought. 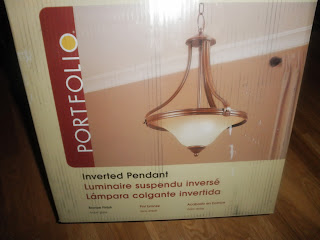 But the bar that came with it is too small to install in the canister that is in the ceiling.  So my dad needs to build a new rod and bring it up next time.
I was already disappointed about the faucets and then I was diappointed about the light.  And then, with the couch on its way to its new home in the West Valley it occured to me that I just sold the background to all of the 4th of July flag bathing suit pictures.
Spencer, 2008 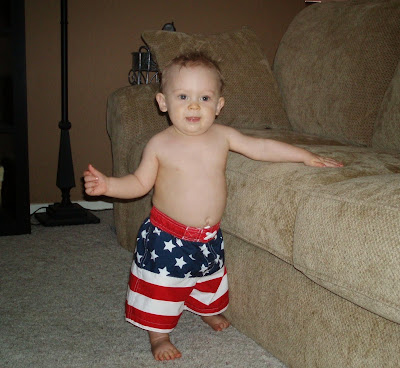 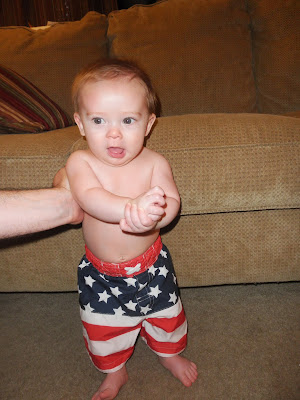 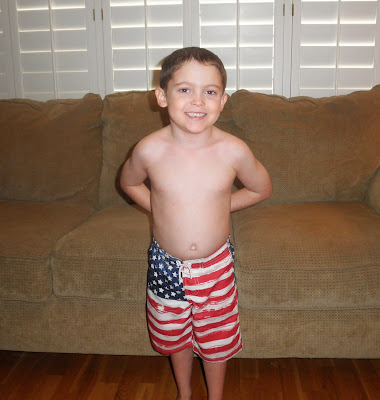 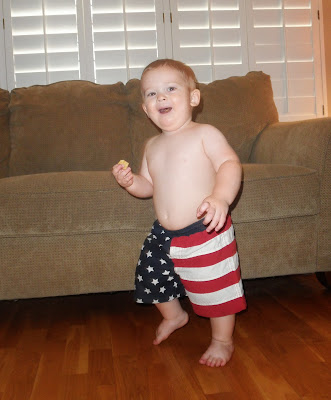 So I had a massive panic attack and couldn't breathe.  But I quickly got over it, because I had a pretty pendant.
I will have another massive panic attack next July though.
Next up for the bathroom:  Michael has to finish painting, I'm going to stain the cabinets (gulp) and Michael's dad is going to remove all of the old tile and replace it with pretty new tile.
It should all be done by Spencer's birthday party in a month.  If not, it'll be done by the "this is the longest we've lived in a house ever" party in February, 2015.
Posted by Natalie at 10:17 PM

Why do I envision you driving the boys in their flag bathing suits to a stranger from Craigslist's house to post in front of the couch?

Hey, I thought I commented on this already. *Sigh* Well, it pays to be up at 3:00 a.m. on vacation. Haha! I am so so so glad you are becoming a DIY blogger now. You are so versatile and can be a food blogger, parenting blogger, DIY blogger, comedian blogger, etc. all in one! Hahaha! I think Megan is correct...you will stalk the owner of that couch just to get your pictures next year! I would have bought the couch because it does match mine so well and also because you could have stalked all the way to NC to see me. But seriously, the boys will look just as cute in front of the new couch! :-)