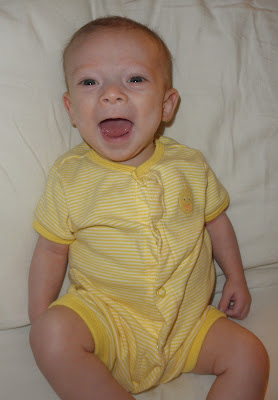 What a happy baby!
Weight/Size
Elliott had his 4 month check up today.  He weighed in at 10 pounds 5.5 ounces.  That is a gain of 14 ounces in 11 days.  He's up 1 pound 9 ounces since the 16th of March and 4 pounds 3 ounces from his lowest weight at 5 days of age.  He weighs 6.5 ounces more than Spencer at 4 months (although Elliott was 14 ounces more at birth).  I hope there will be no more talk of feeding tubes with growth like this.
Elliott also gained an inch and is 23 inches long.  That's 4 inches grown since the day he was born.
He's wearing 0-3 month and 3 month clothes and has finally graduated from newborn diapers and is wearing a size 1-2. 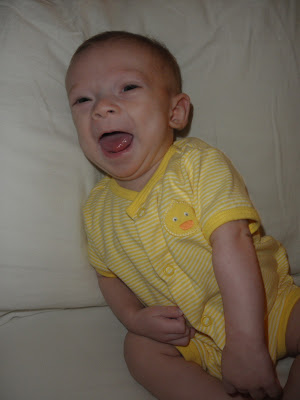 Sleep
We finally felt comfortable with letting Elliott sleep on his own about the middle of March, right after he turned 3 months.  That doesn't mean that I don't check on him FREQUENTLY when he is asleep.  His bedtime routine is nurse, swaddle, rock and then we lay him down in the co-sleeper.  He sleeps 4-6 hours straight before waking.  He has been getting up 2 times during the night (between 12 and 2 and between 4 and 5) to nurse.  He cuddles with me in bed after he nurses the first time and the second time  He's up for the day between 7:30 and 8:30.  He takes a mini nap in the morning (usually while being held or in a baby carrier) and a longer (sometimes over 2 hours) nap in the afternoon.  He still needs to be swaddled for his afternoon nap and at night.  We just barely (like yesterday) started leaving his legs out of the swaddle.
Movement
Elliott is now bringing his hands together. He is holding toys. He'll try to swat them when we lay him on his lion gym. He's able to hold a toy and get it in his mouth- though he's not always successful. He spends most of the day sucking his fingers. When he is laying on his back he can twist his body around. If you picture a clock- he'll start with his head at 12 and within 5 minutes his head is at 3:00. 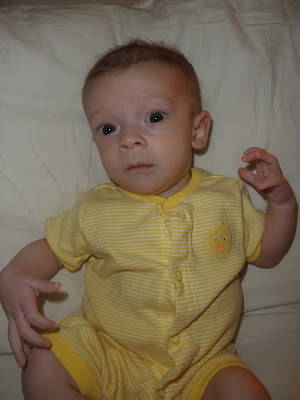 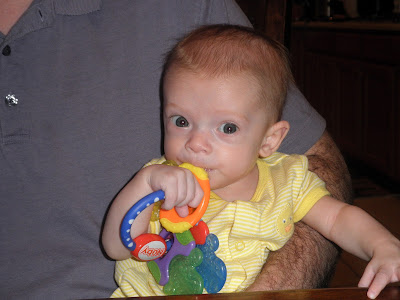 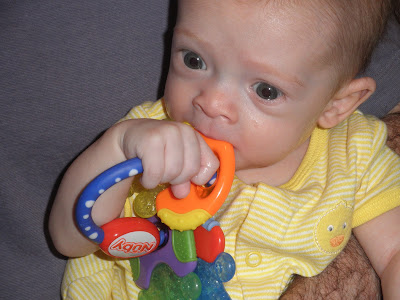 Communication
Elliott officially started laughing over the weekend.  I heard it once and Michael heard it once.  He squeals when he is happy.  He coos when he is happy.  He has quite the cry when he is upset.
Sweet Remembrances
1. The appointment with Dr. Williams where we were told that Elliott had never had any seizures and we could stop using his anti-seizure medication.
2. Finding out that Elliott's direct bilirubin is almost within the normal range (and his total bilirubin is officially within the normal range)
3. Elliott's first Easter.
4. Sleeping on his own and (mostly) doing a great job at it.
5. Taking two trips to Tucson in one month- for Easter and for Girl's memorial service.
6. I went back to work 8 hours a week and Elliott has done great being cared for by daddy and Megan. 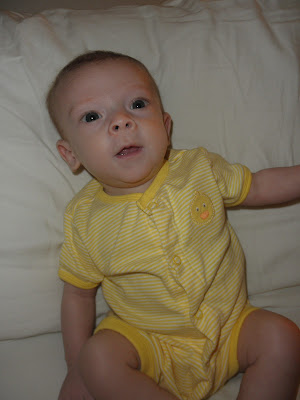 Food
Nursing 8-9 times a day. Using a supplemental nurser to give 1.5-2 ounces of pregestimil formula during each nursing. Elliott got some jars of baby food in his Easter basket, but we're waiting until 6 months to start solids.
Mood
Happy!  He cries LOUDLY when he is hungry, but the only time I ever let him get hungry is during the night.  He fusses when he is tired.  He cries off and on in the car.  Other than those times he is a happy, smiley baby.  We call him Smiley Joe all the time. 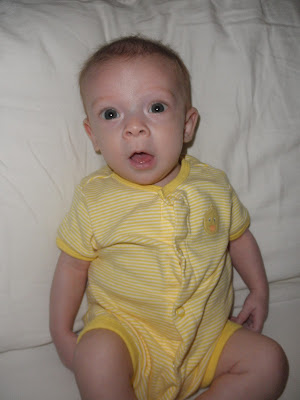 Medicine
We are weaning him off the Keppra.  He'll take his last dose on Friday, April 27th.  He is taking 1 mL of ursodiol twice a day.  We found out that what we thought was vanilla flavoring is actually marshmallow.  Great.  We changed from SourceCF (cystic fibrosis) vitamins to over the counter infant vitamin drops called Poly-Vi-Sol.  He doesn't like them as much as the SourceCF.
Likes and Dislikes
Likes: looking at faces, smiling, being held, watching his brother play and be crazy, being swaddled for sleep.
Dislikes: driving in the car (most of the time), getting blood drawn (it gets harder every single time),  not being part of the action. 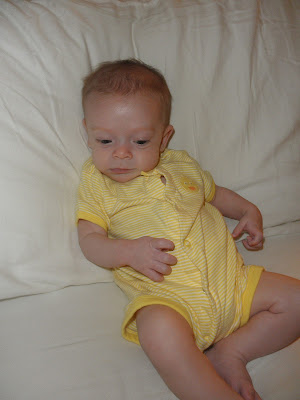 I wanted to get a cute picture of Elliott's sweet little bum in his chick outfit.
This is what he did.
Step 1.  Move your head to the right. 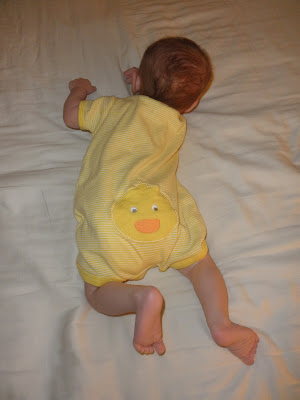 Step 2.  Drop your head and right shoulder. Kick your legs. 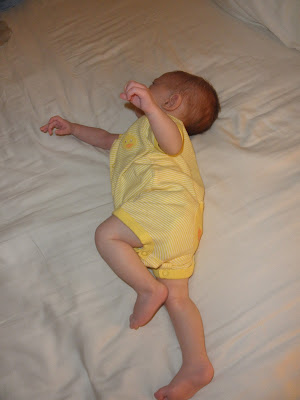 Step 4.  Success!  Off that dang tummy.
Total time in roll: about 5 seconds. 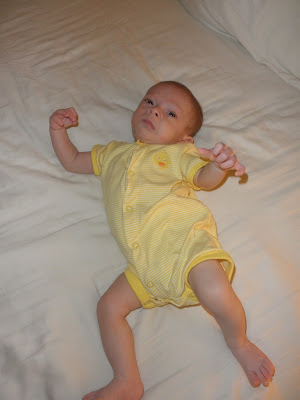 Ha Ha Elliott!  You can try, but I will still succeed in capturing my picture. 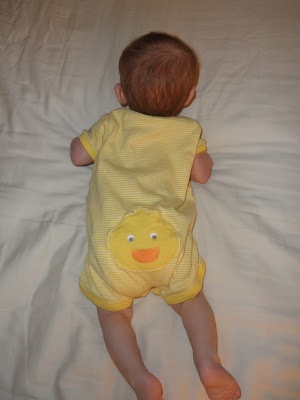 Picnik.com is closing in 3 days (Damn you Google!  Bad move!).  This may very well be one of the last ever picture collages.  Boo.

He looks so happy!!! Love all the pics!

Cute pics, and please note that I am staying less than a month behind on the blog now. Let's see how long that lasts...