Elliott is at that age where he is going through about 4 outfits a day.  Mostly this is because of drool, but also his shoulders get soaked when he is nursing and falls asleep and the supplementer keeps dripping formula.
I don't mind so much.  His clothes are adorable and it's fun to try new looks.  He also has enough clothes (through a combination of hand-me downs from Spencer, new stuff and donated stuff from friends whose boys have outgrown their clothes) that I could probably go a month without doing laundry and he wouldn't run out of clothes.  Most of his outfits would be onesies, but it would still be a new one each day.
He was wearing this darling little number yesterday.  I think this was donated by Erin after Will outgrew it. 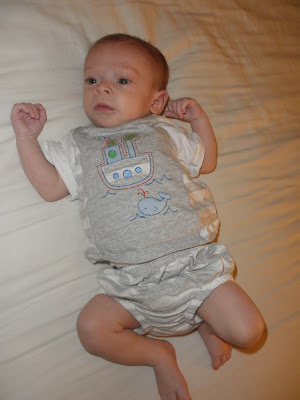 The diaper cover is just too cute. 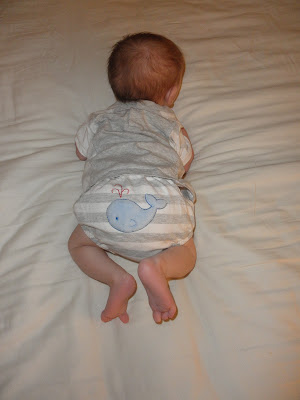 He started today in a onesie, then changed into the doggy outfit he got in his Easter basket. 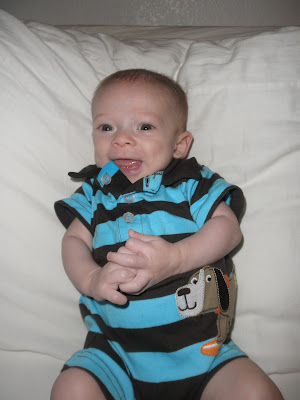 I was changing his diaper when I heard some very vigorous sucking.  I looked down and he was going to town on the collar. It worried me because the collar was very close to a button.  I hope that string is strong. 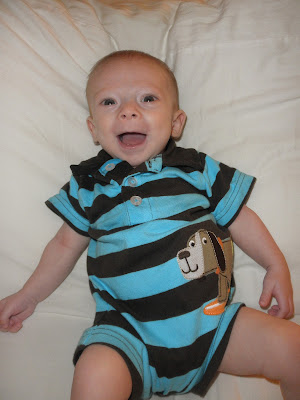 It was 97 degrees today. Spencer came home from school sweaty and dirty.  I told him to put his clothes in the hamper and then he never got re-dressed until bed time.  Elliott was in just a diaper in a swaddle blanket for his nap and when he got up he was just in a diaper.
I predict this is how my kids will look 85% of the time until September. 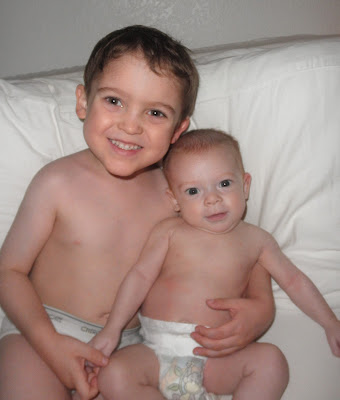 this picture is so cute it makes my head hurt.

Too cute! I might start laying around in my underwear all day too... it looks cozy and cool! Would that be weird?

Aww (and look I'm only a couple of weeks behind on your blog now!).