Elliott is 10 weeks old today.  That's 2 weeks from 3 months!  3 months is 1 month from 4 months, which is 2 months from 6 months.  Not like I'm counting or anything.  I don't want to wish away the days of him being tiny, but.......oh who am I kidding.  I really dislike (hate) the newborn phase.  I am much better with older babies and much, much better with toddler and up.  Give me a 3 year old any day of the week. 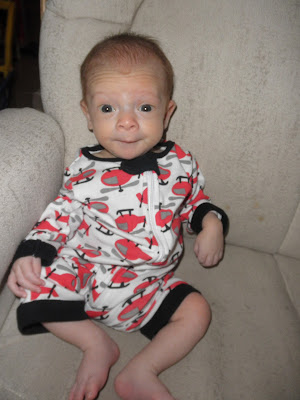 So, I wanted to talk about on the appointment with Dr. Miloh that we had on Wednesday.  Elliott's bilirubin three weeks ago was 3.6.  It is now at 3.0.  That is good.  It is going down.  Dr. Miloh did say, though, that it is not going down as much or as fast as he expected or would like (normal, by the way, is .4)  The big shock was Elliott's GGT level.  GGT is short for gamma-glutamyl transferase.  GGT levels may be used to determine the cause of an elevated alkaline phosphatase (ALP). Both ALP and GGT are elevated in disease of the bile ducts and in some liver diseases, but only ALP will be elevated in bone disease. Increased levels of GGT levels may indicate in general that the liver is being damaged but does not specifically point to a condition that may be causing the injury.  Elliott's GGT level has been trending down since we first started testing it.  Normal for a baby his age is in the 100's.  A month ago his was 330. Then it was 296.  At our last appointment it was 255.  This week it was 1,300.

We were floored.  Speechless.  I kind of had to brace myself on the desk when Dr. Miloh gave us that number.  He told us that we shouldn't get worked up over one number on one test on one day, but really, 1,300?  He also requested that we track down the chest x-ray that Elliott had during his sepsis hospitalization, because sometimes an elevated GGT level can indicate congestive heart failure. 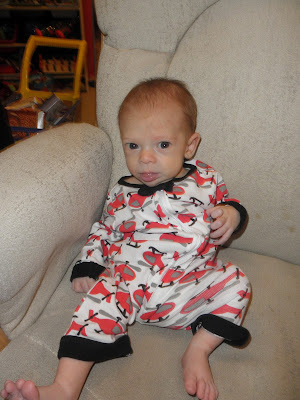 Based on the new lab numbers, the previous ultrasounds that we had, how long we've been dealing with this, and the news that the seizures were continuing, Dr. Miloh is now exploring the possibility of a rare metabolic disease.  Elliott passed his newborn screener that looks at the 28 most common metabolic infant diseases, but there are thousands of others that are not screened.  Elliott had more blood taken at the lab at Phoenix Children's Hospital and also a urine sample so they can start testing.  Some of these tests take weeks to conduct and have to be sent to labs outside of the state.  It will be a while before we have the results of everything.  One thing that we do know for sure is that Elliott does not have alpha 1- antitrypsin.  Those results were finally back.  I won't even explain what that is, because we know for sure he doesn't have it. 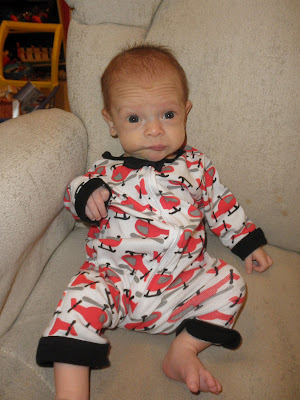 Dr. Miloh was very interested to hear that the latest EEG was positive for continued seizure activity.  We told him that we made an appointment to see an epileptologist at Phoenix Children's Barrow's institute but can't get in until April.  He said that he would try to "pull some strings" to get us in earlier.  He has a hunch that the seizures are part of the big picture and we need the epileptologist on the team to help figure it out.  We're grateful that he's going to use his position for an extra push, but also terrified that he thinks it is so important.  I'd rather be told that it's not a big deal. 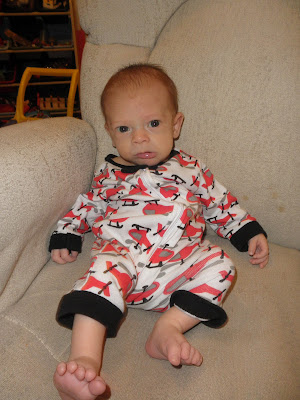 We also talked a lot about Elliott's growth.  Dr. Miloh wants us to start working with the nutritionists in his office.  I checked out a book called Diseases of the Liver and Biliary System in Children from the U of A Health Sciences Library.  This information was taken directly from this book.  It really explains what we are up against:

There are many causes of cholestatic liver disease, which can be divided into two groups: those presenting in infancy and those presenting in the older child. Babies with cholestatic liver disease usually have increased energy and nutrient requirements, up to twice the estimated average requirement, as a result of malabsorption, higher energy expenditure and infection.

Most infants with cholestatic liver disease will require feed modification. If bile flow is limited from the liver into the gut, fat emulsification and digestion are reduced. This causes malabsorption of fat, fat-soluble vitamins, essential fatty acids and some minerals, leading to steatorrhoea, growth failure and rickets.

Cholestatic babies often consume huge volumes of standard infant formuls or breast milk, because of malabsorption of Long-Chain Triglycerides (LCT) in dietary fat, which require bile for digestion and absorption. As fat is the major energy source at this age, the infants are not satisfied by their milk and consume large volumes to compensate. To promote growth it is essential to improve absorption by manipulating dietary fat and substituting LCT with Medium Chain Triglycerides (MCT). MCT does not require emulsification with bile and is absorbed directly into the portal vein.

Cholestatic breast-fed babies will demand frequent feeds, which is exhausting for the mother. Mothers are encouraged to continue breast feeding when possible, but the introduction of an MCT-containing formula, as a top up or supplementary feed, will reduce demand on the mother.

MCT containing formula should continue until the infant’s bilirubin level is within normal range or the child has had a liver transplant. If growth is still failing, despite resolution of cholestasis, the introduction of a high enery infant formula can be successful in maintaining growth.


Dr. Miloh did point out at the appointment this week that there is absolutely no reason for me to stop nursing.  He even said that Elliott must be getting a great deal of milk from me because he is actually gaining weight, just not as much as we would like or as much as he would without the cholestasis.  Some babies with cholestasis gain nothing at all, even on a diet of pure formula and even when solids are added.  That made me feel better. He said there is no reason I need to change anything until we meet with the nutritionist in 2 weeks because we are not at a "critical" point yet.  When we do meet with her we are going to talk about food supplementation, as well as vitamin supplementation, which we have already started.  His vitamin drops contain between 200-1000% of his daily needs (depending on the vitamin).

Dr. Miloh did give us a free sample of the type of formula that we will need to start supplementing with if it comes to that.  It is called Pregestimil, for babies with fat malabsorbtion problems.  He gave us the sample because #1) This formula is not available off the shelf.  It must be prescribed by a doctor and you buy it from a pharmacy, and #2) One small can of it usually costs around $30. 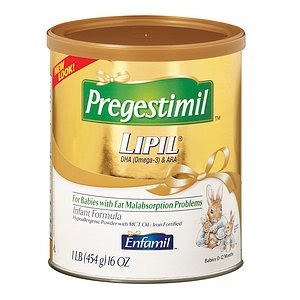 If Elliott continues to have cholestasis and growth problems as he gets older the book gives suggestions for getting extra calories into toddlers and kids.  They include adding butter, cheese and heavy cream to everything you can, frying all meats in oil and butter, adding sugar to everything you can and encouraging the consumption of fatty, sugary snacks. 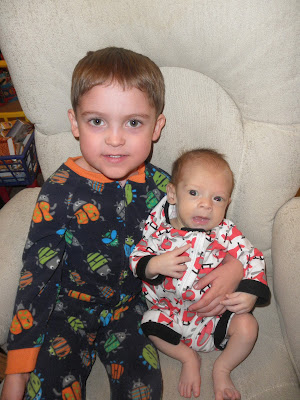 How do you think it's going to go over with Spencer when he is eating his healthy, well rounded dinner and Elliott is eating fried chicken, cheese and cookies? 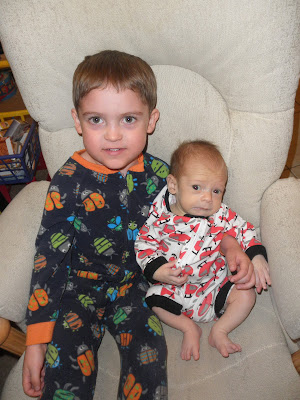 Well, that is it for the depressing update.  Spencer and Michael are going to Transportation Day tomorrow.  Elliott and I are staying home to nurse about 80 times and hopefully nap.  The next post will have some great pictures of Spencer with trucks and cars and buses.  I'm crossing my fingers for it because, if you'll remember, Michael took zero pictures at Disneyland when I was in the hospital.

P.S. On a very positive note, Elliott is lifting his eyebrows (like a curious look) when he makes eye contact and he was genuinely smiling at me today.  It lasted about 5 minutes and then he started fussing again.
**Comments have been closed due to excessive spam**
Posted by Natalie at 8:40 PM

I just love his little expressions! Too cute!
So sorry that the liver thing is still such a mystery. We can compare notes on how to fatten up our children like the witch in Hansel and Gretel someday though, so there's that.
Stay strong Mama! You're doing a great job!

He's a super cute baby. I hope you get your answers soon.

Oh Natalie. I really hope you guys get to the bottom if this soon :( poor sweet little man. He is absolutely darling. The cutest little guy I have ever seen!!

Hang in there, all if you.

Look at those big feet! They are growing! Hope T-Day was fun and that pictures were taken. You really need to hire a photographer when you can't go! :-)

Elliott is so cute! I love the first couple pics. And you are amazing to take the time to write posts like this for all of us! So sorry the news is not getting better but hopefully soon the prayers will start being answered.

Hi Natalie,
Sorry I haven't been in blog land lately. Sorry to hear you're still going through all this. I wish you guys all the best. I'll be thinking of you.

Elliott is getting the best possible care. You and Michael are amazing parents. You also have amazing boys!!