Michael and I did some calculations and figured out that we spent about $55 (without taxes) on Halloween this year.  $20 for Elliott's costume, $15 for Spencer's costume and $15 for a big Costco bag of candy.  We gave out all but a few little bars from our candy and when we dumped Spencer and Elliott's candy in the same bowl it equaled the same amount as what we had given away.  So really, we could just save $40, skip the costumes and trick-or-treating and just buy a $15 bag of candy to give them.

But that wouldn't be as fun, right?

The day began with a visit from Winston, of course.  He brought each kid a Snoopy chocolate bar. 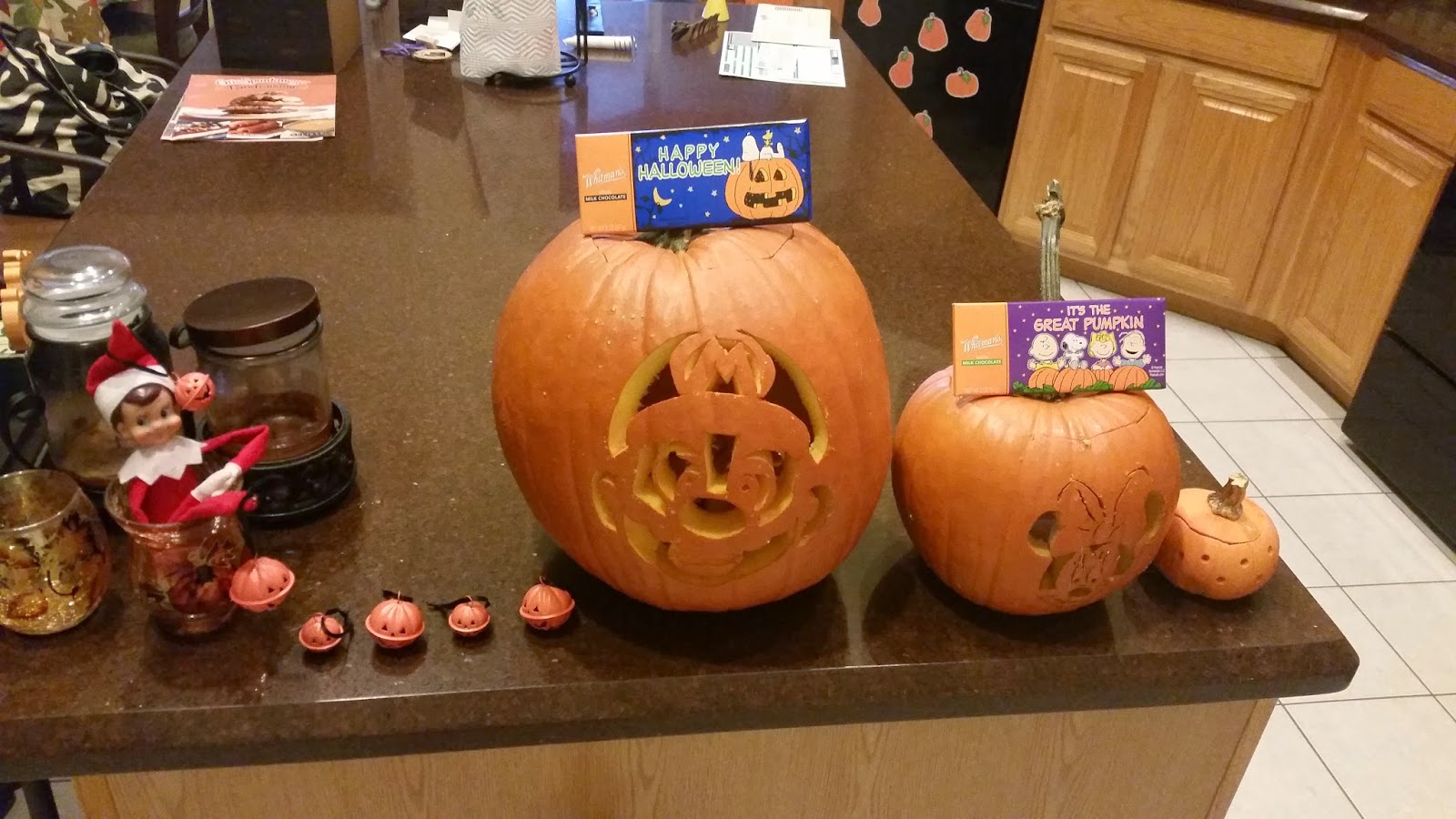 I had to work that day.  I made sure to dress in my Halloween best. When I got home we ate a quick pizza dinner, 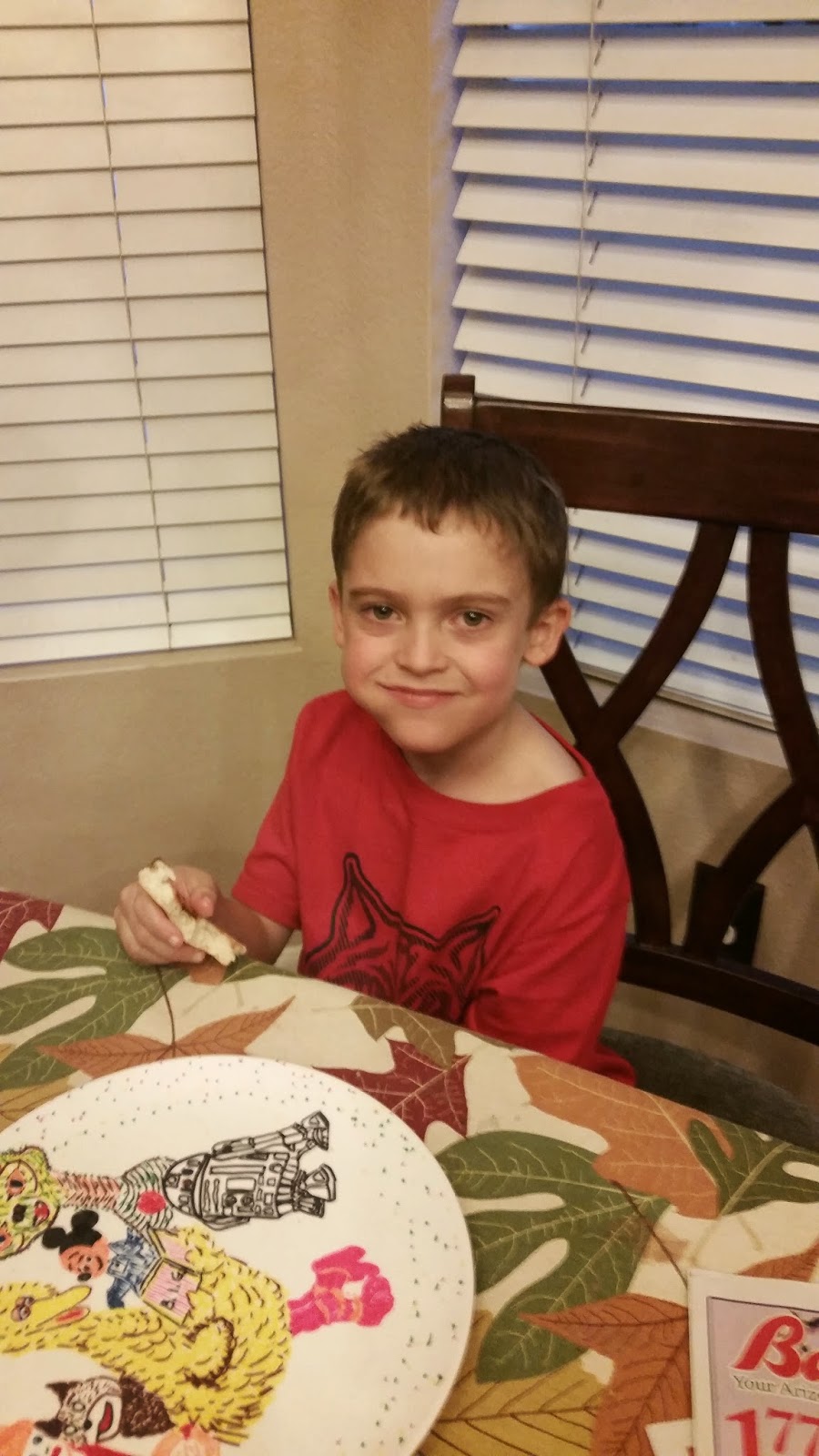 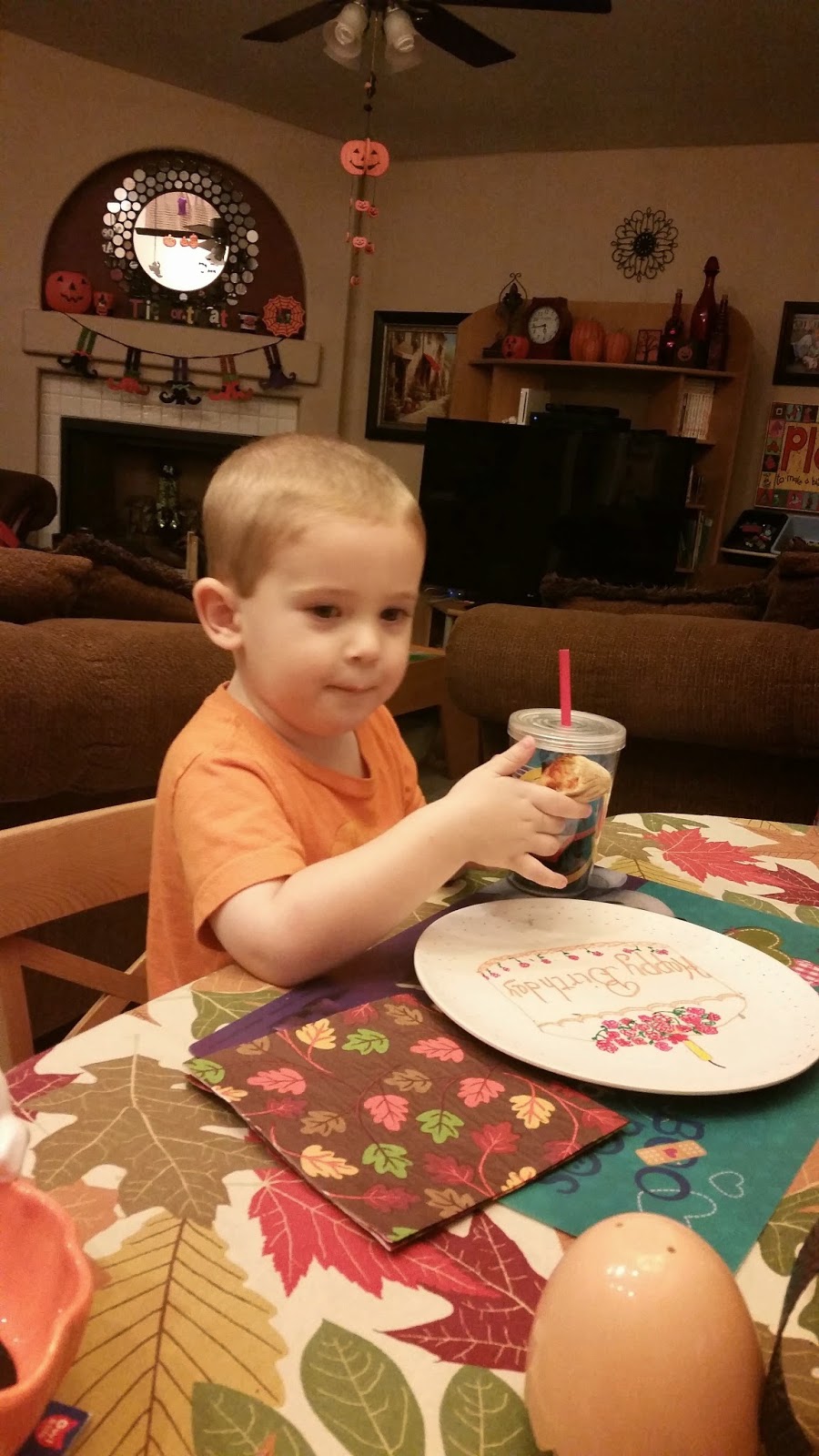 and then Mario and Luigi got dressed so we could hit the streets. 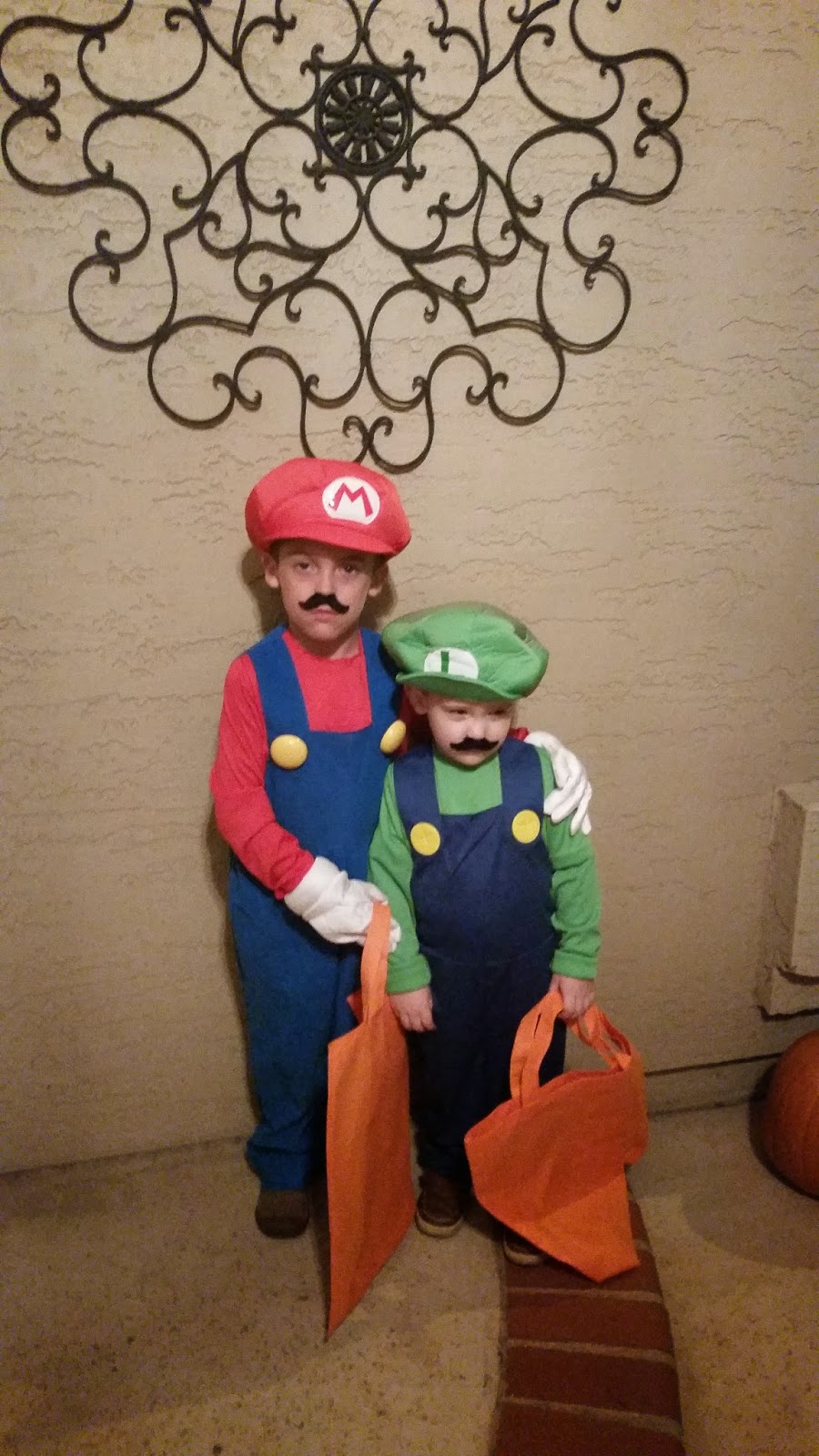 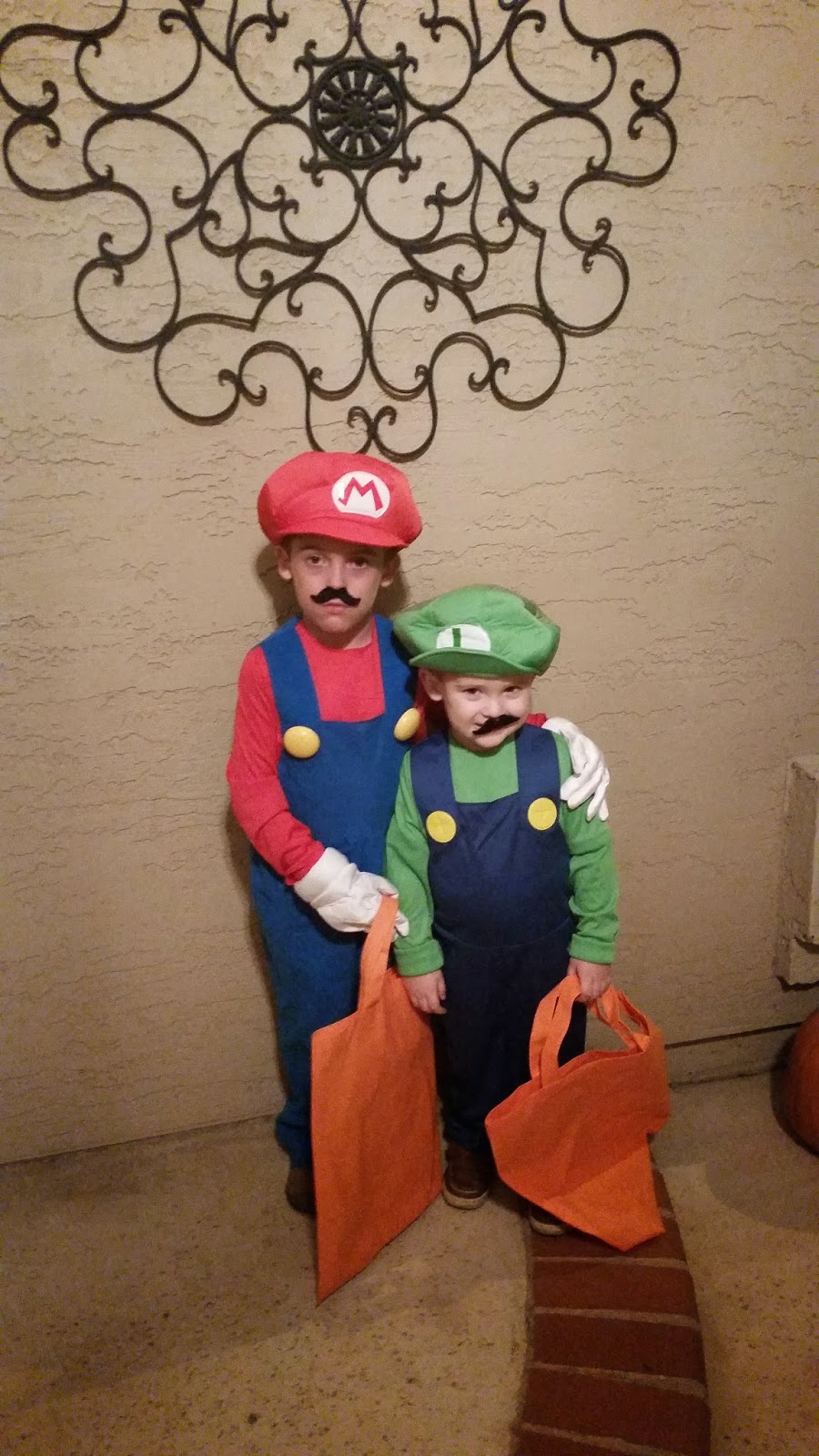 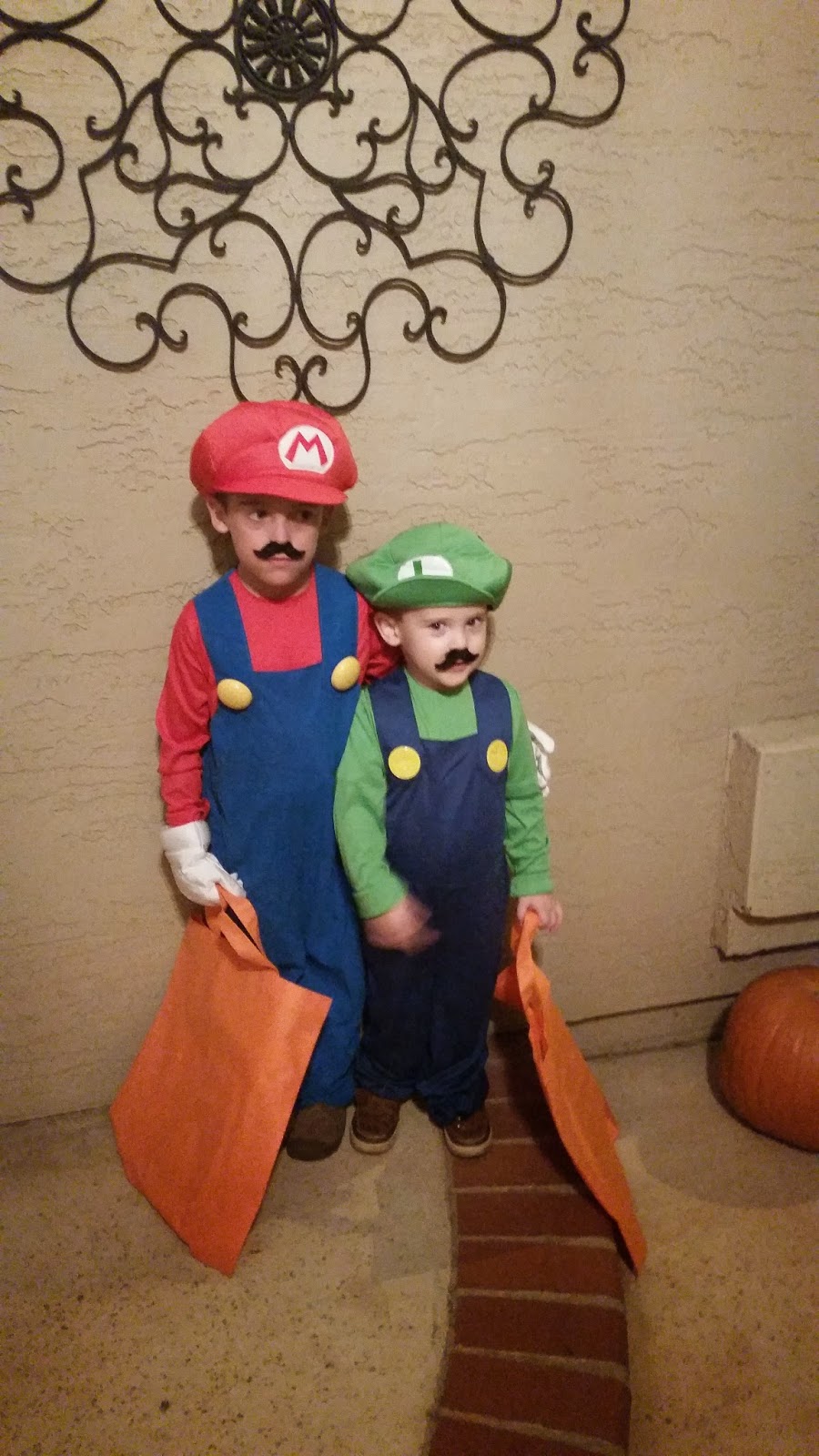 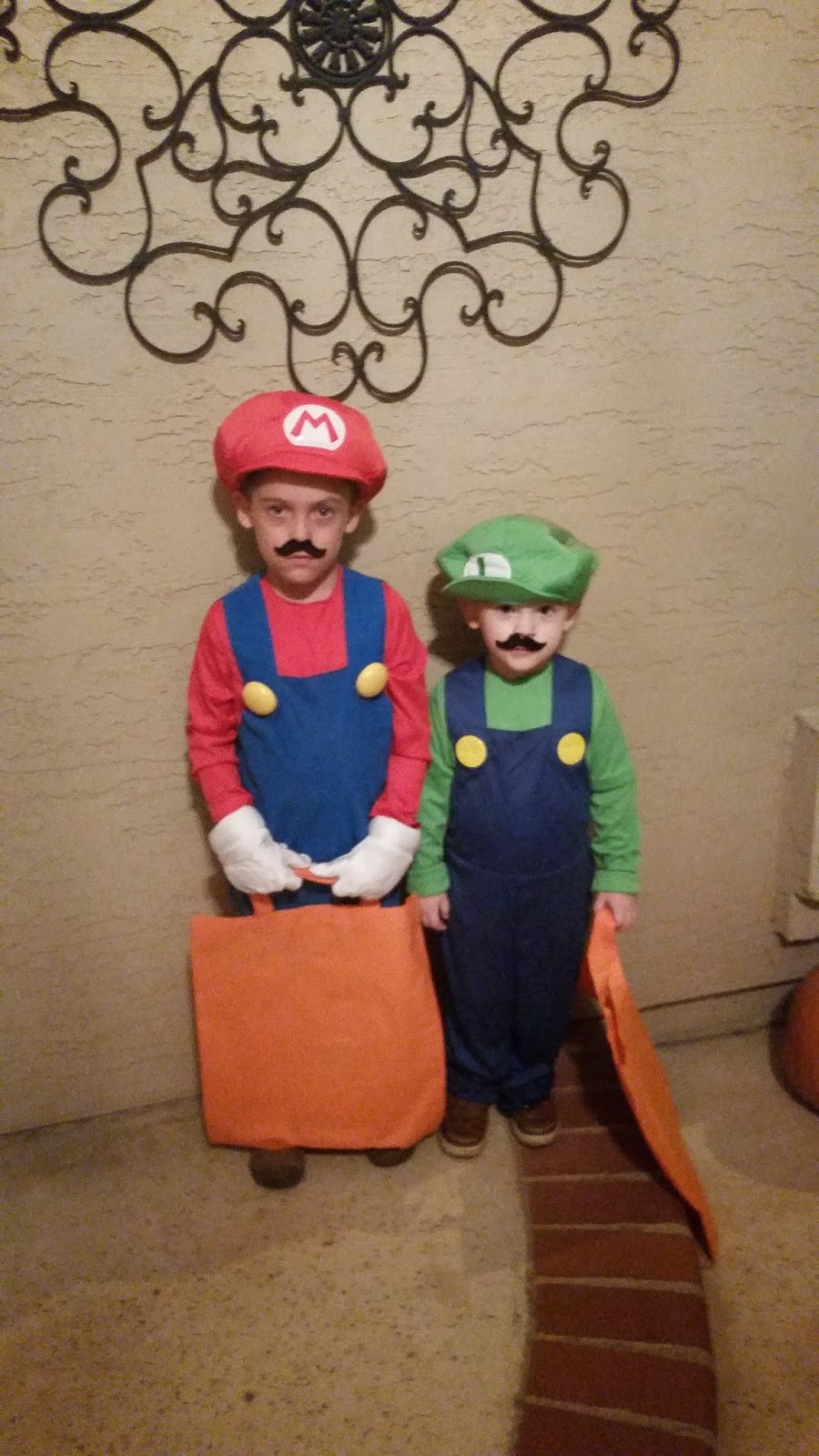 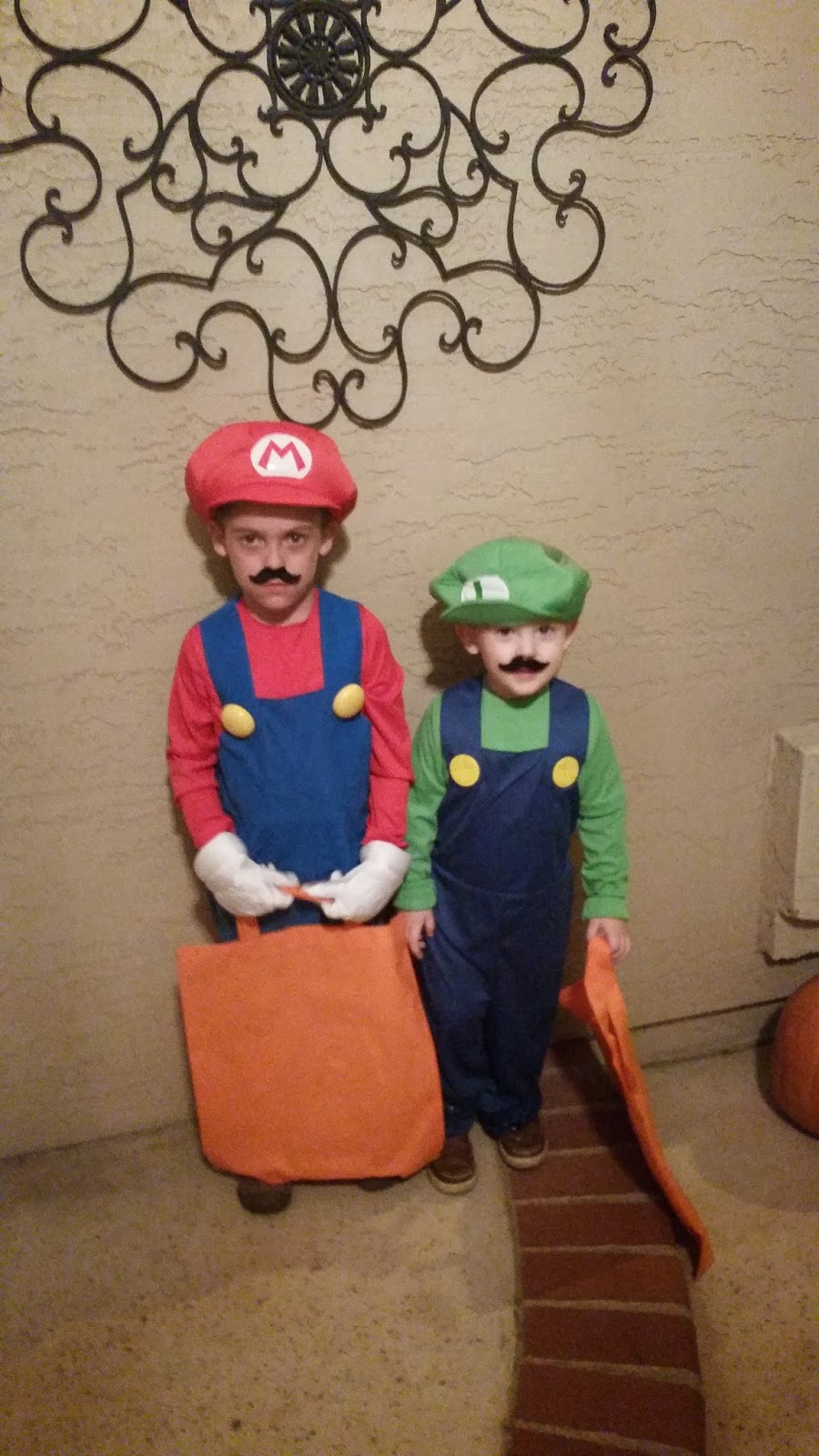 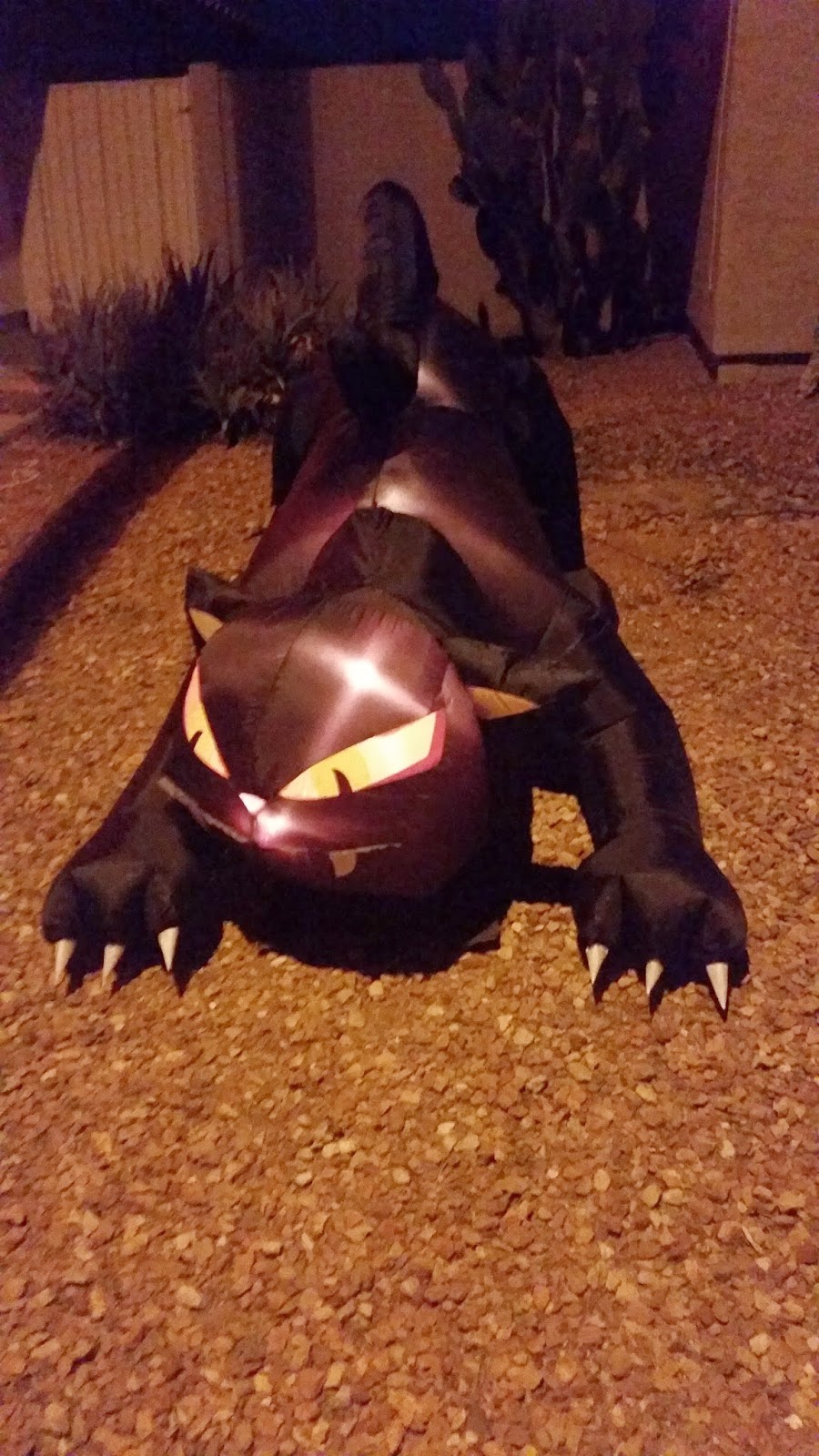 This was actually the second house.  The first house was too dark for a picture. 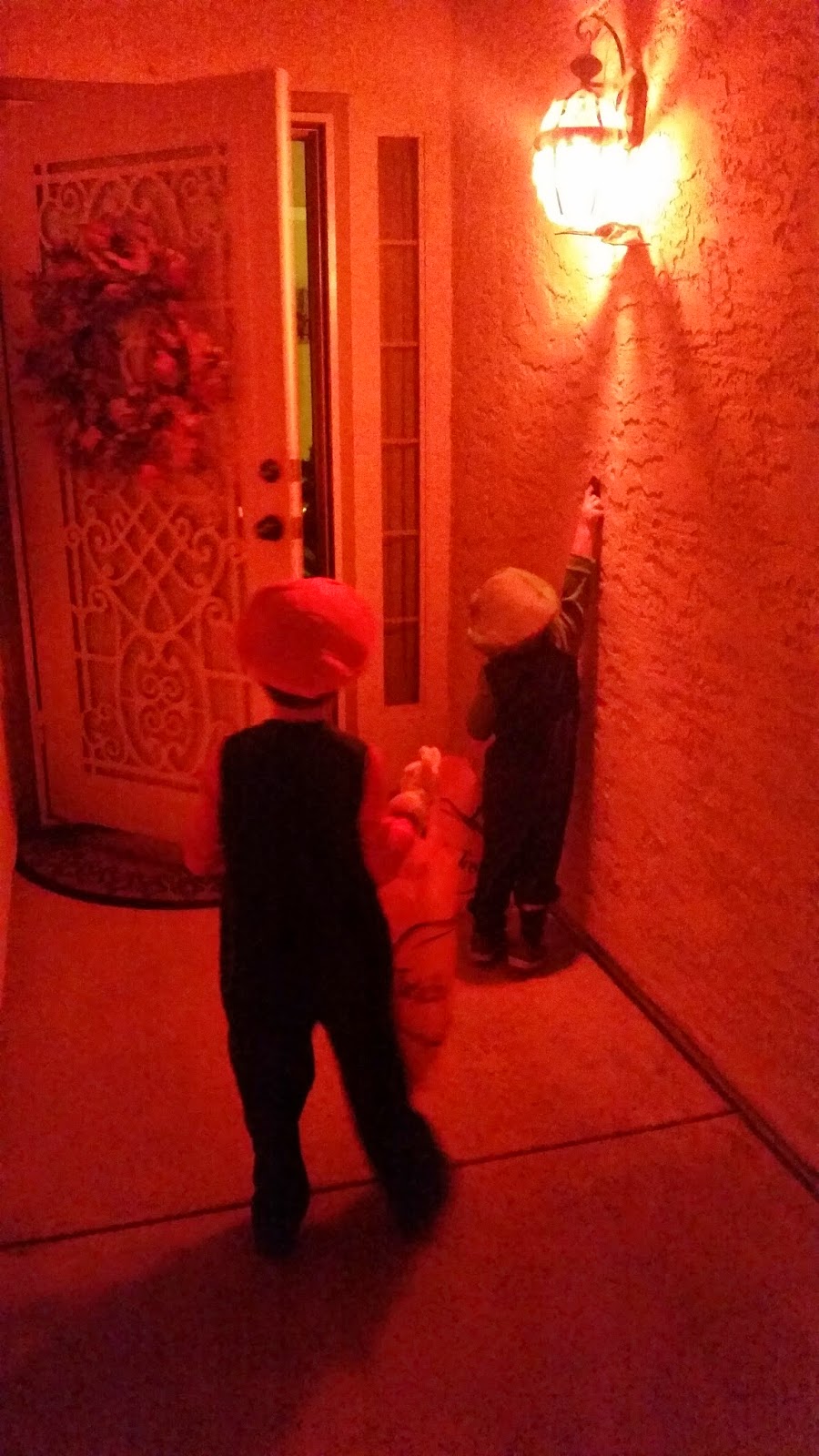 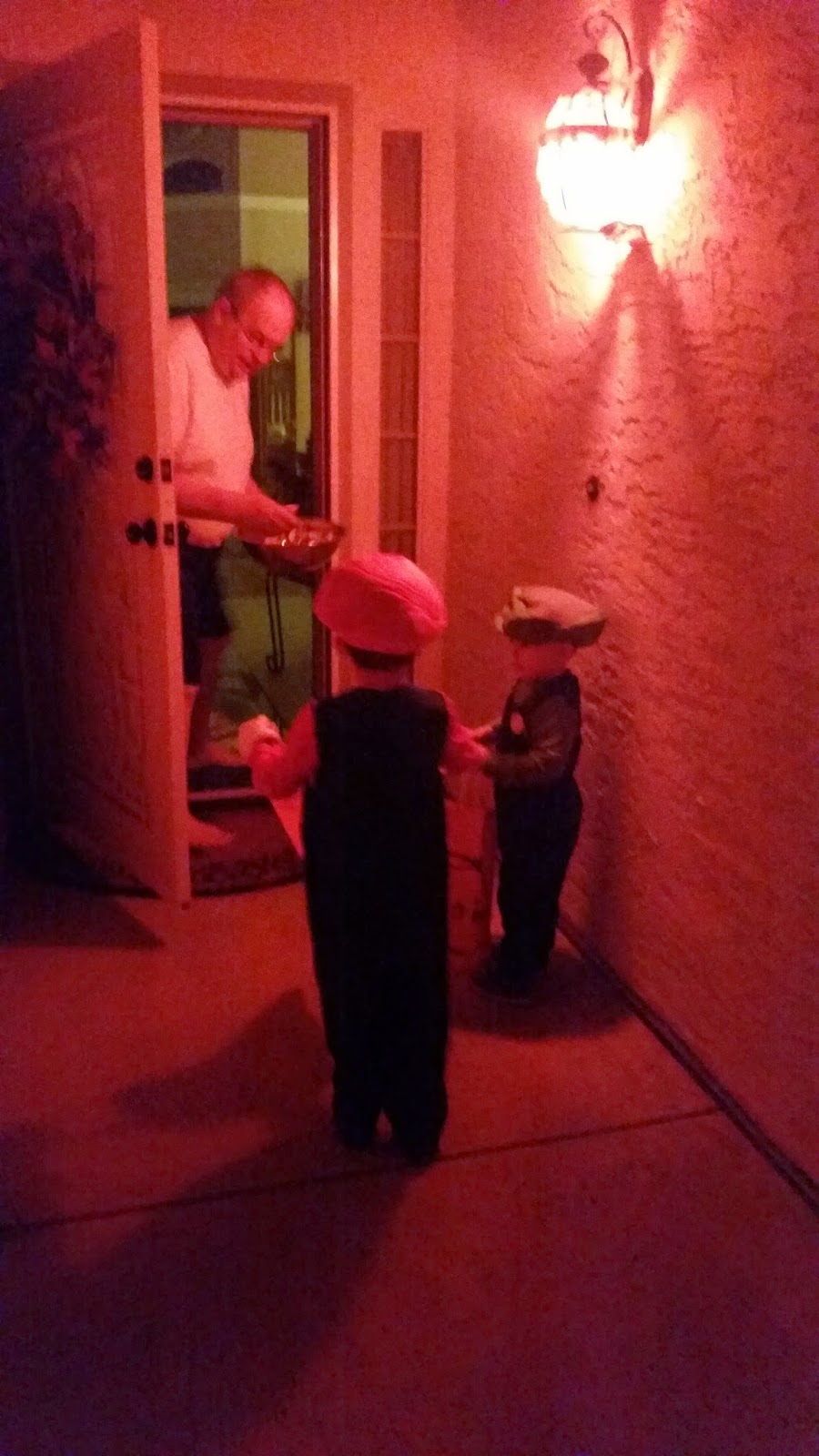 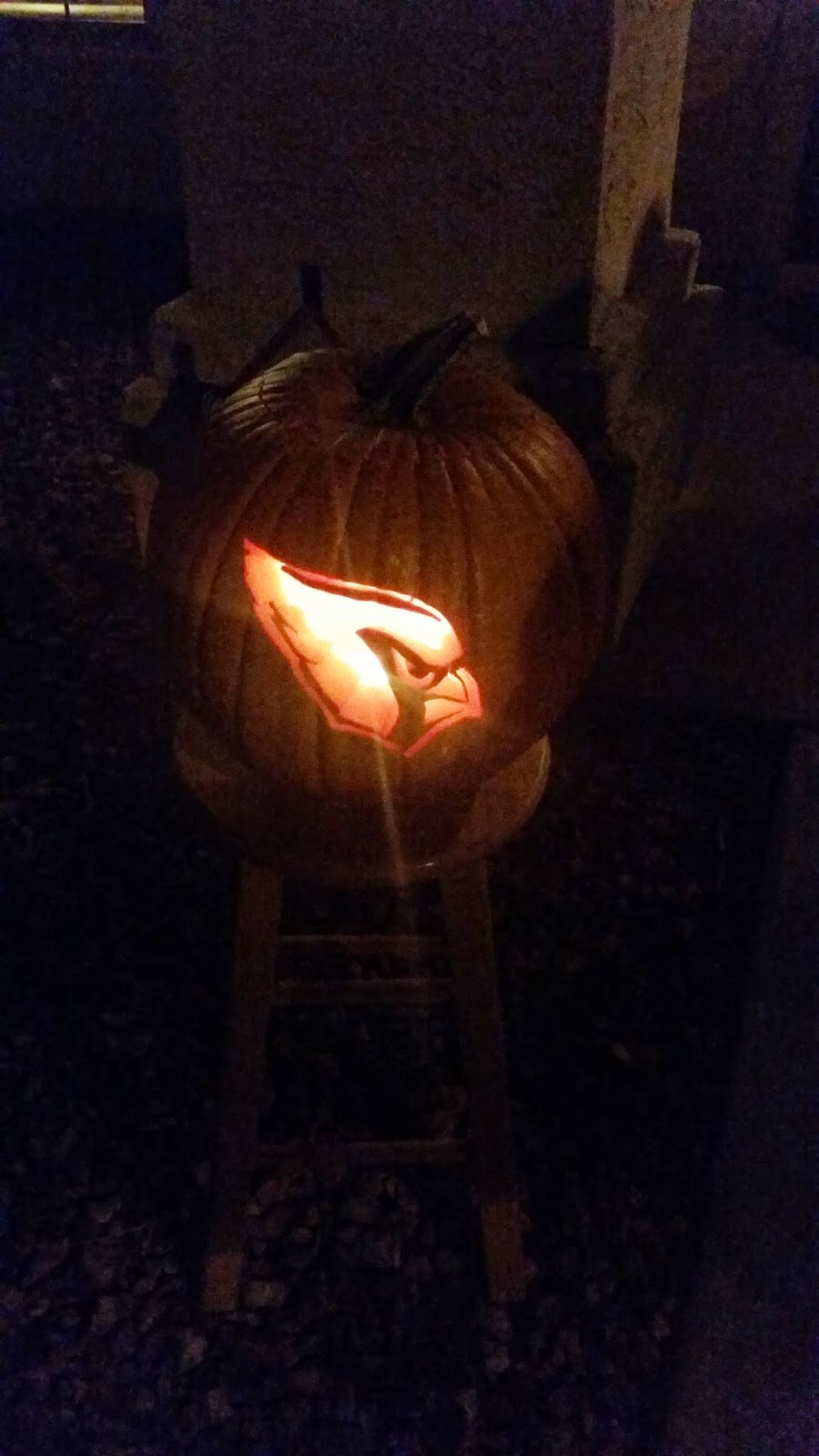 This is what happens when you carve you pumpkins too early in Arizona. 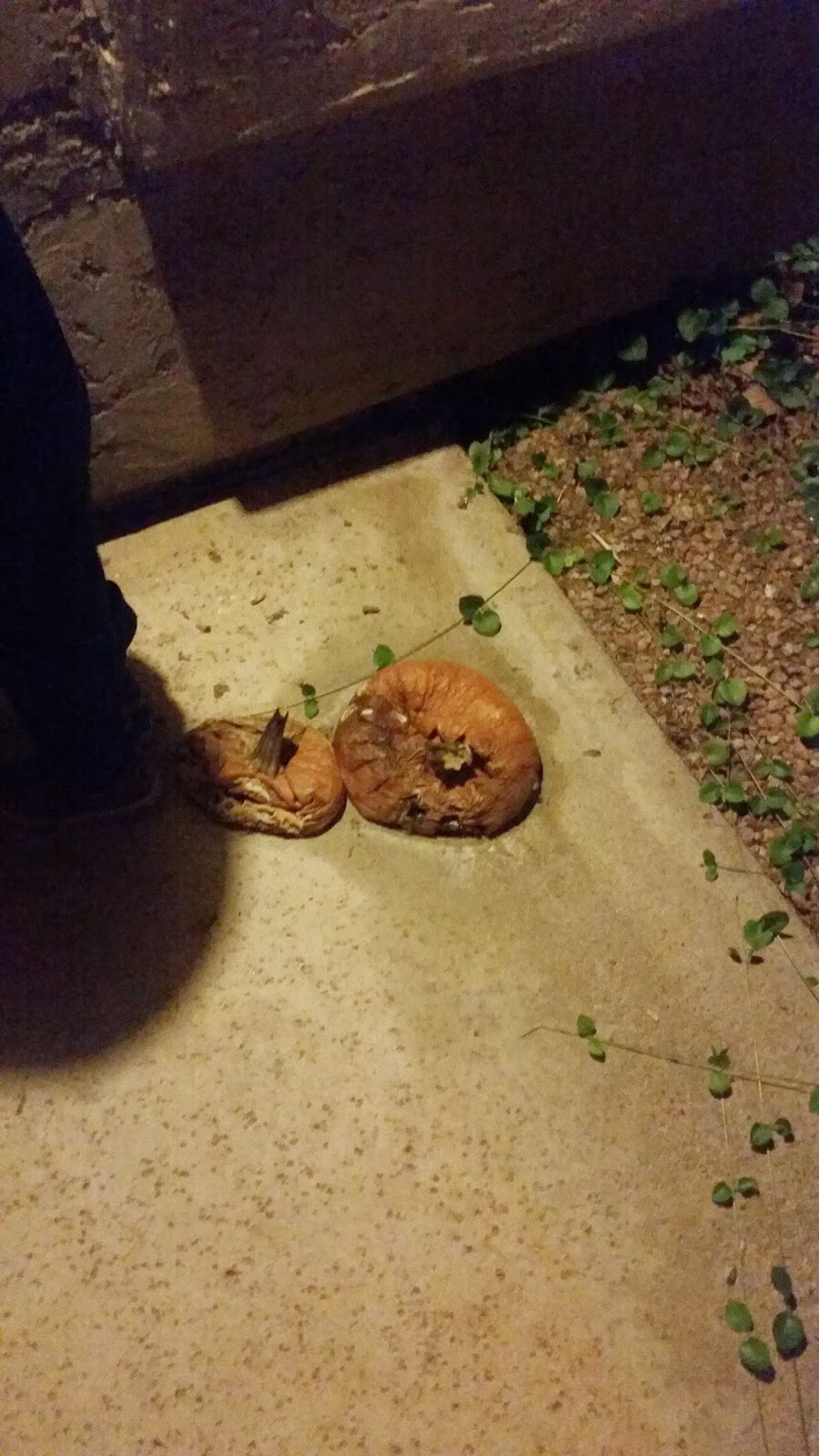 Oh, and this is what the yard of a jerk looks like.  These people had real, burning candles stuck all over the ground of their walkway.  Um, hello?  Burning candles, costumes, kids.  Not the best combination.  And then they didn't even answer their door. 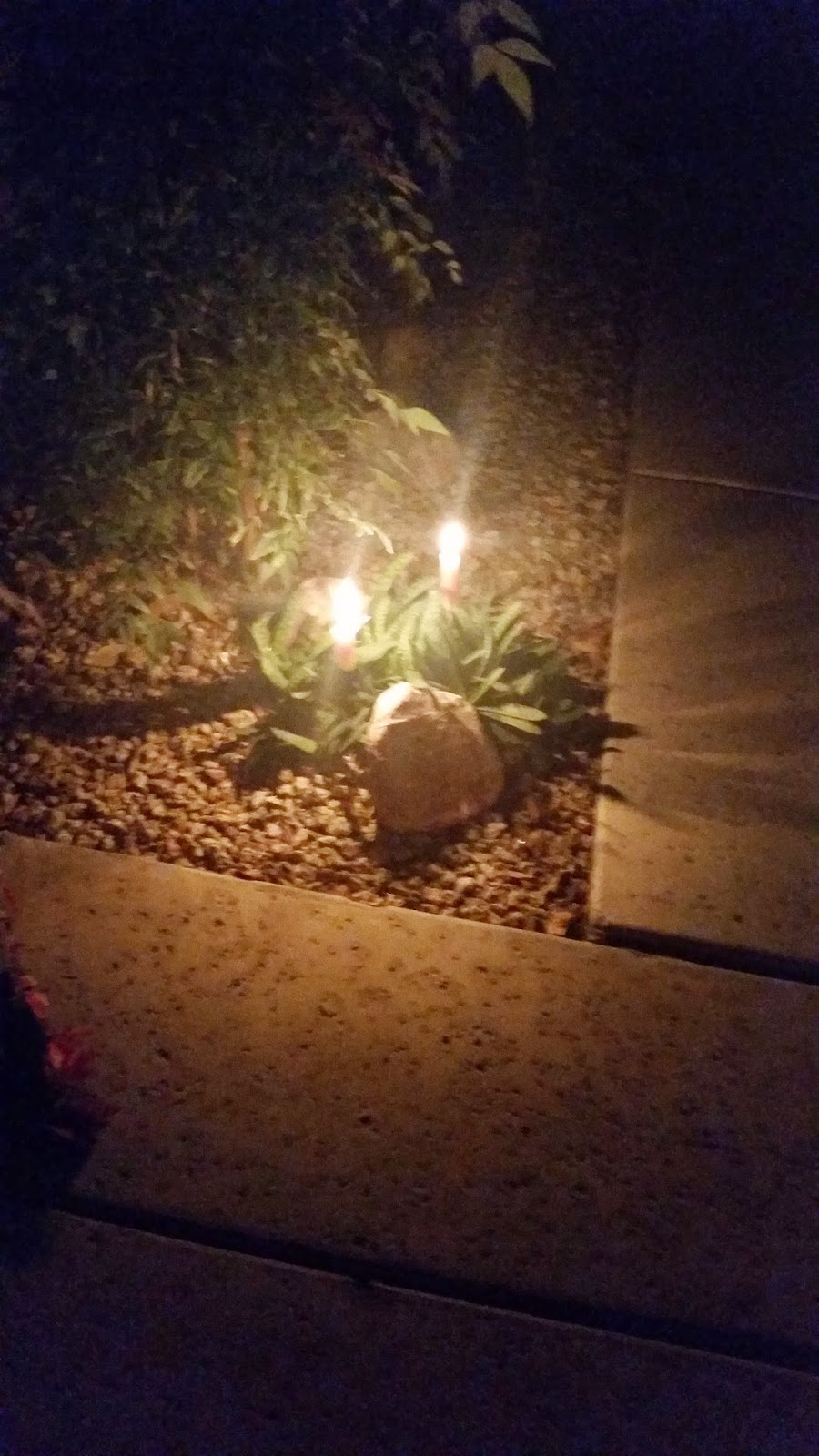 We did our street and the street to the north of us and then stopped in for some soup and cupcakes at our neighbor's house. 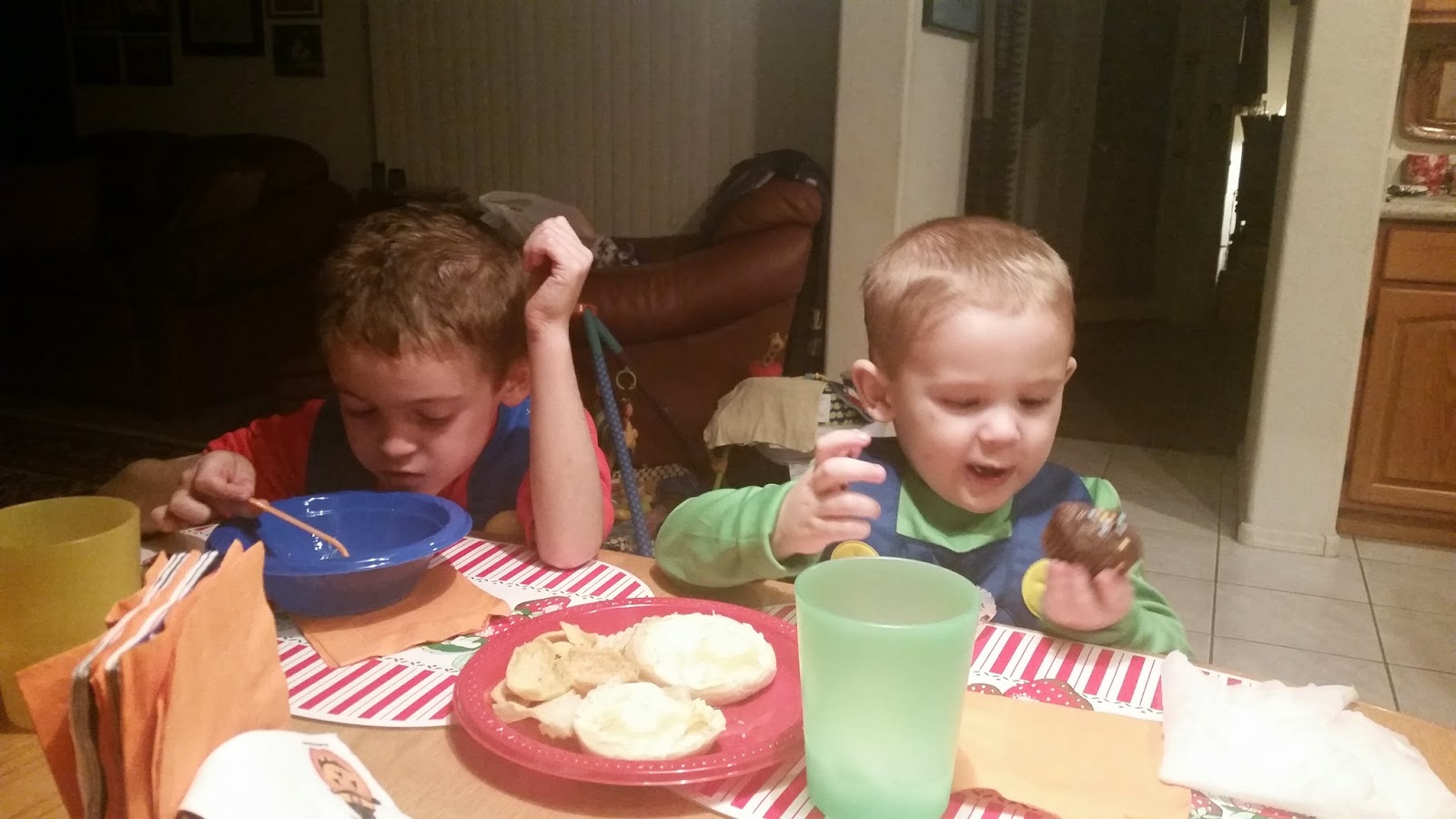 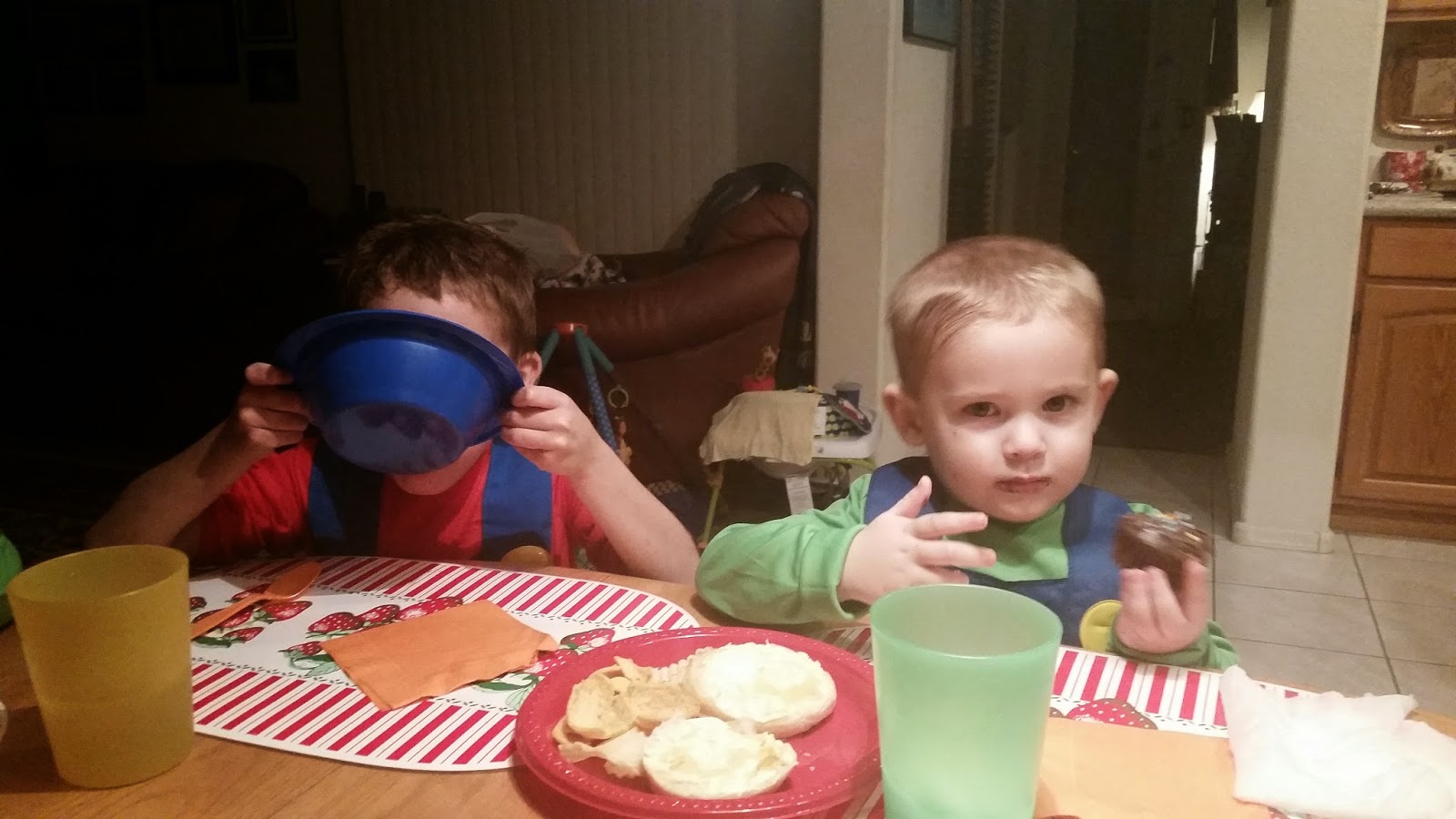 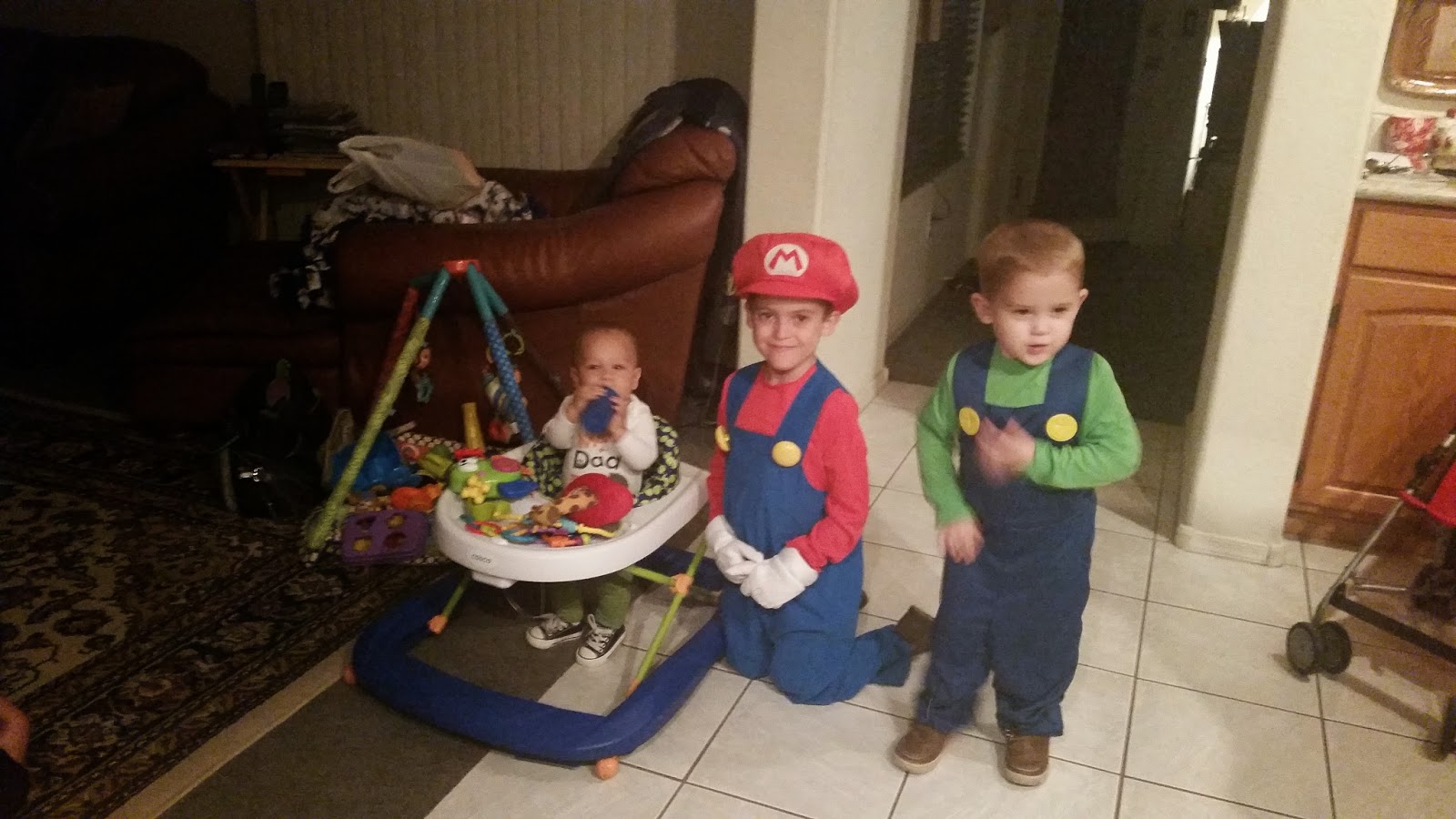 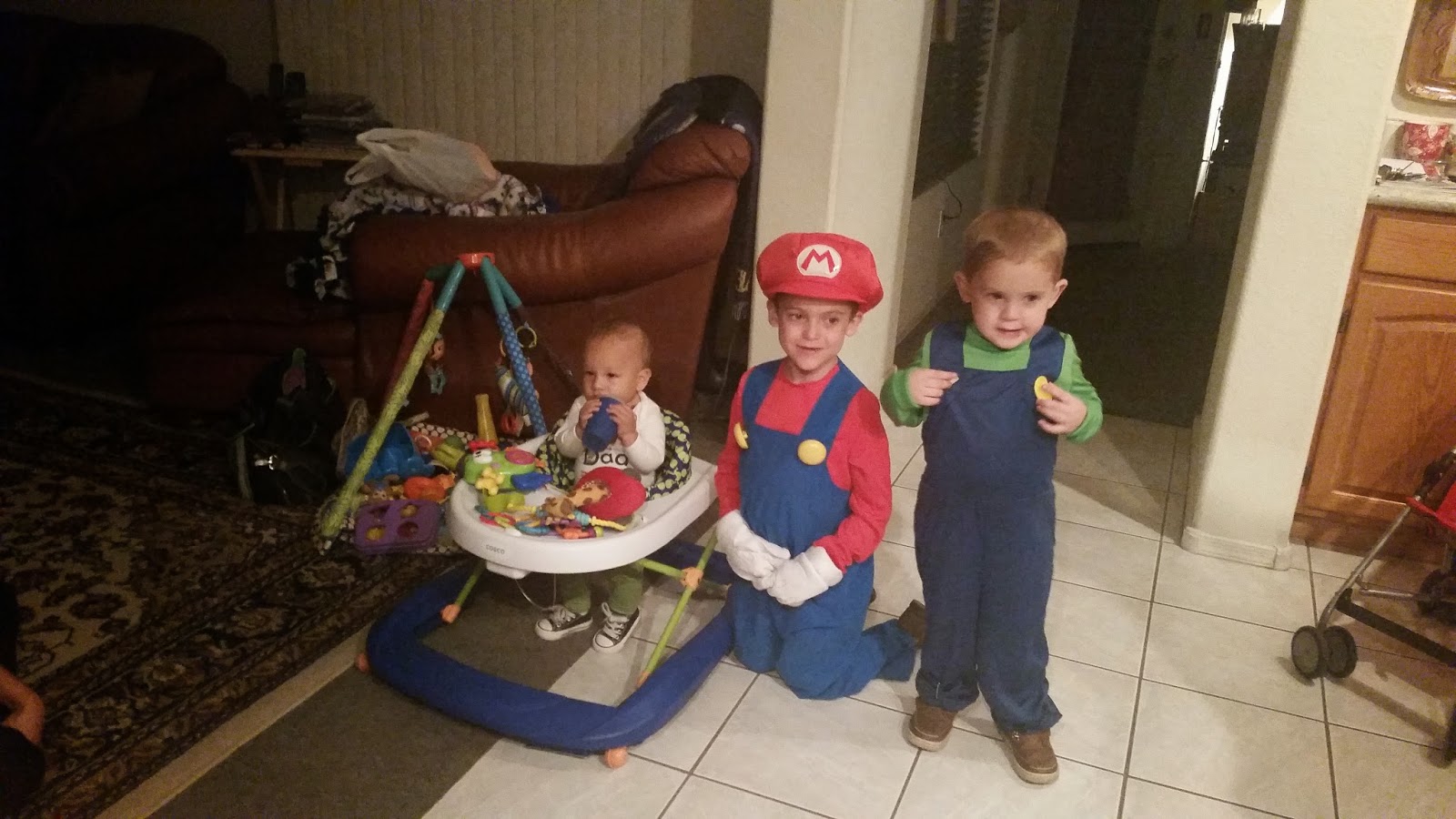 We did one more street to the south of us and then we were done.

The kids handed out candy for about 20 minutes before we turned out our light.  At one point there were about 15 older kids at the door.  They all seemed to know Spencer and were very excited to see him.  Apparently he rides the same bus as them. 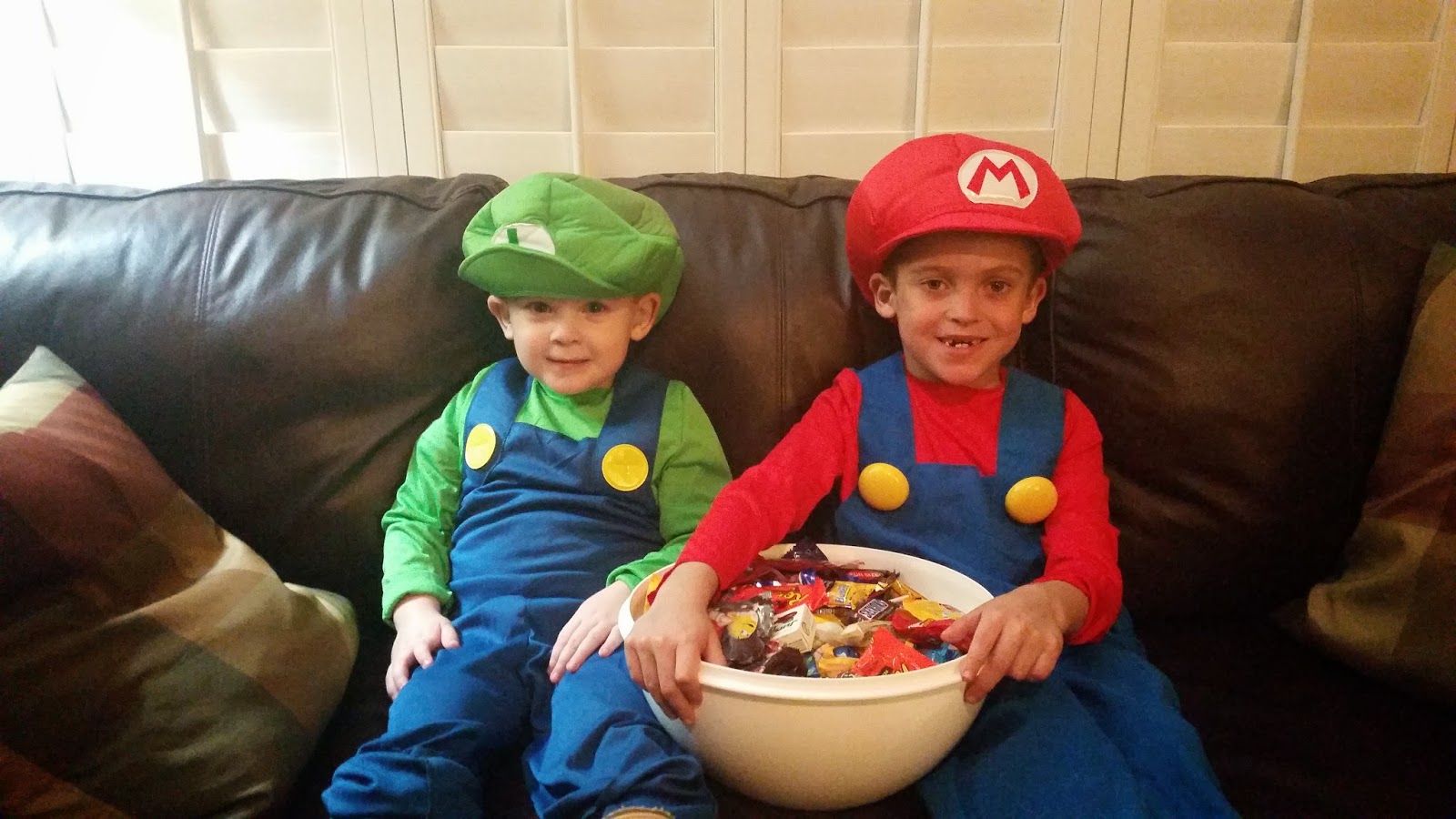 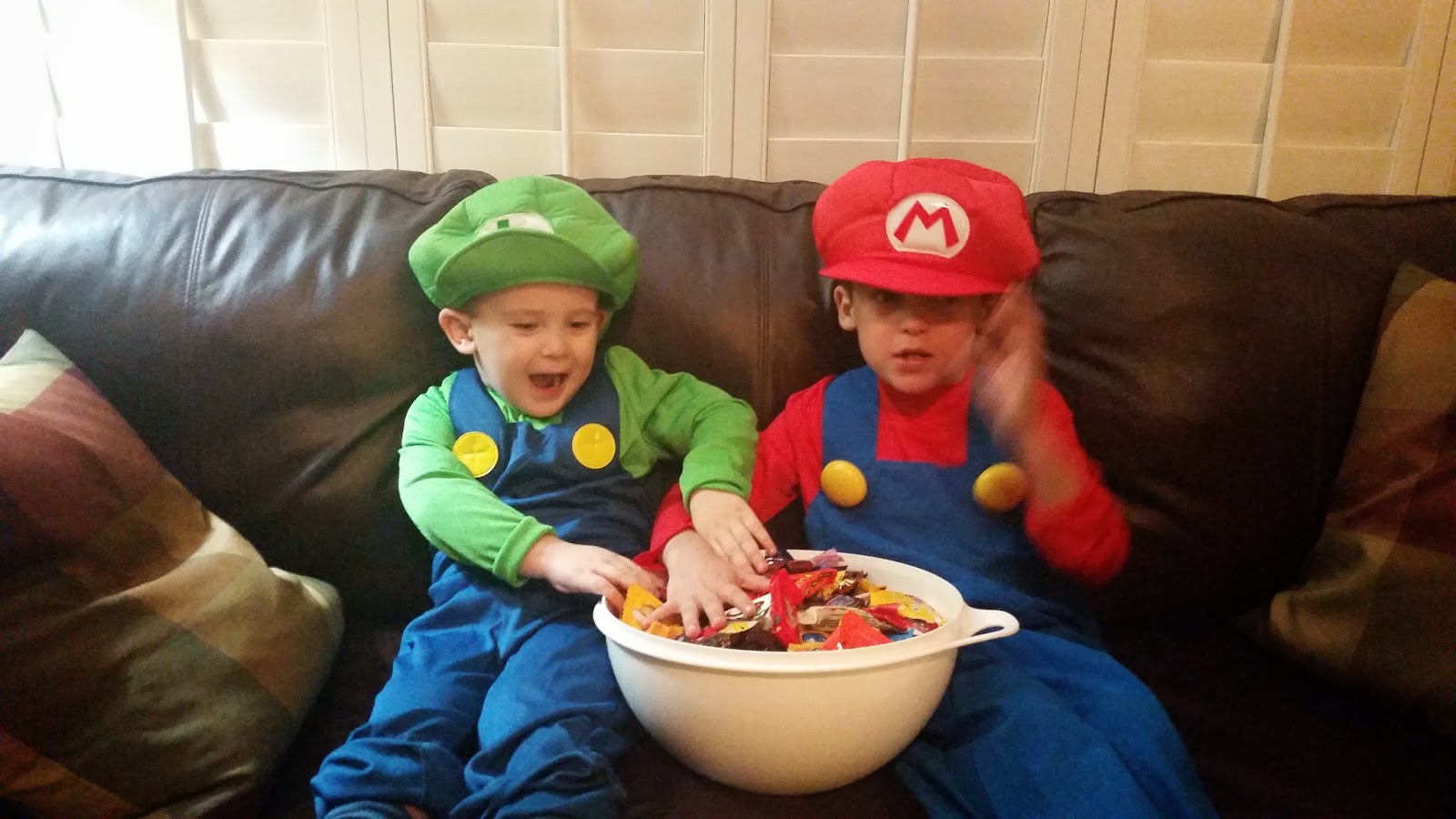 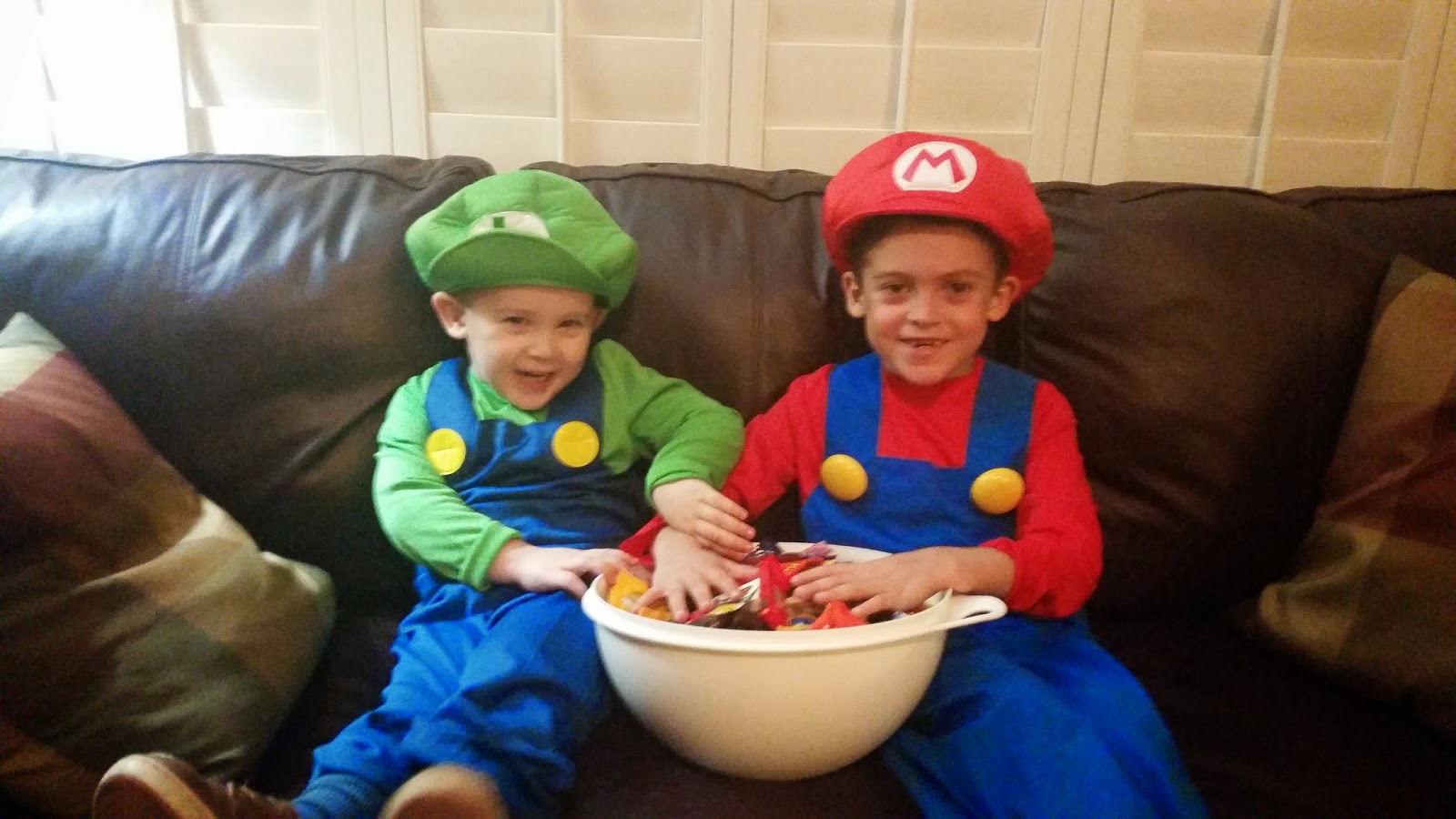 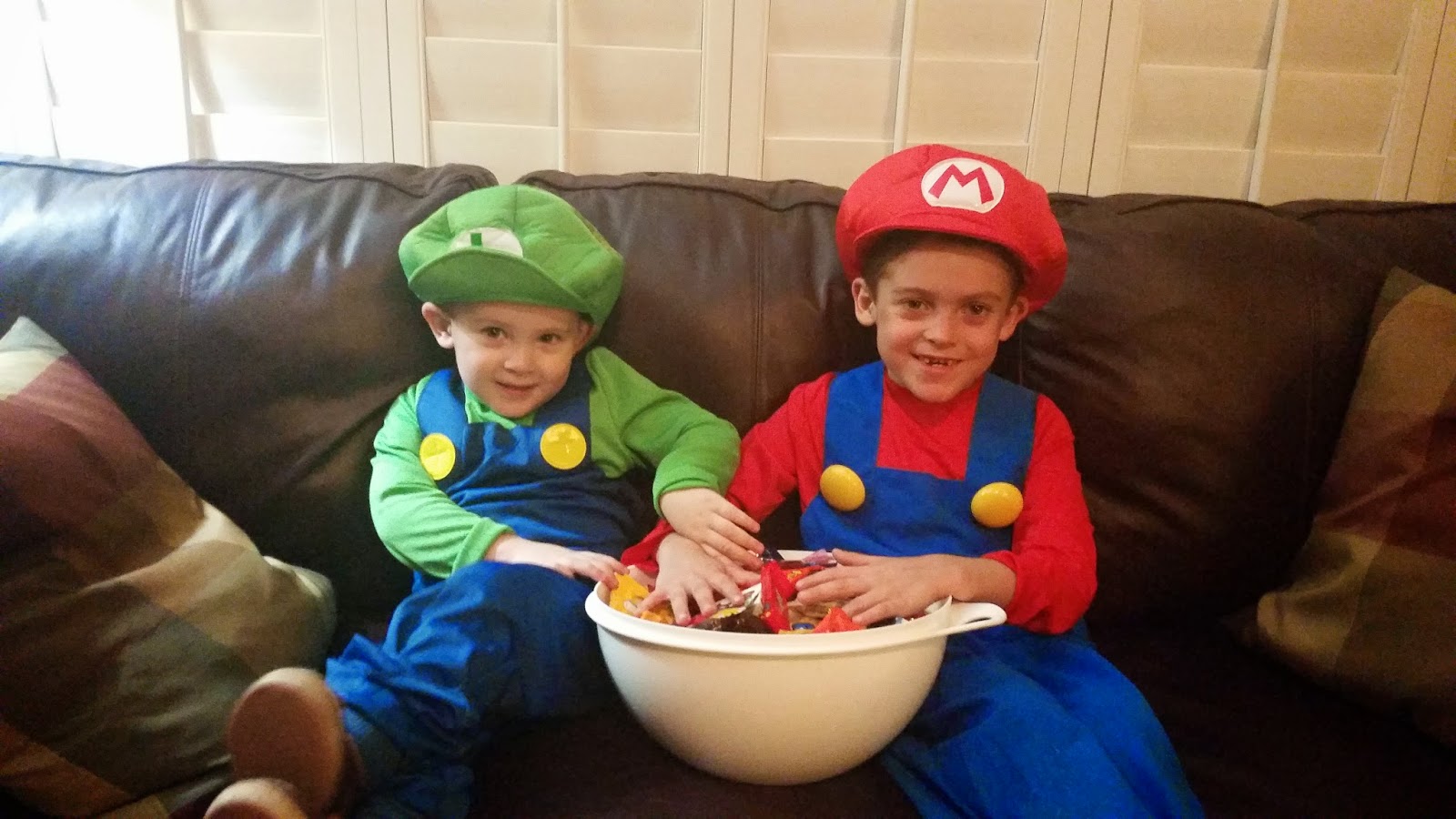 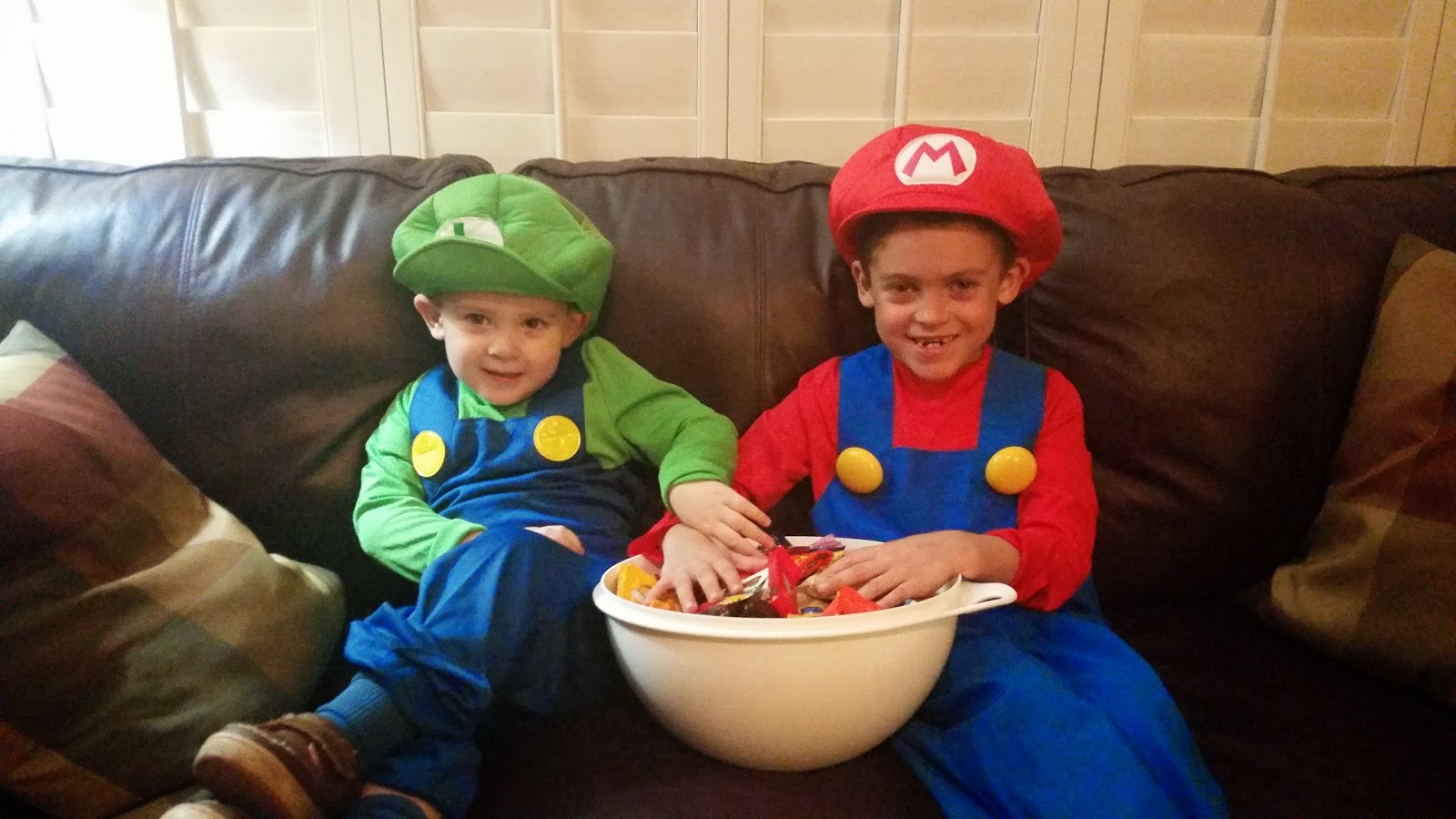 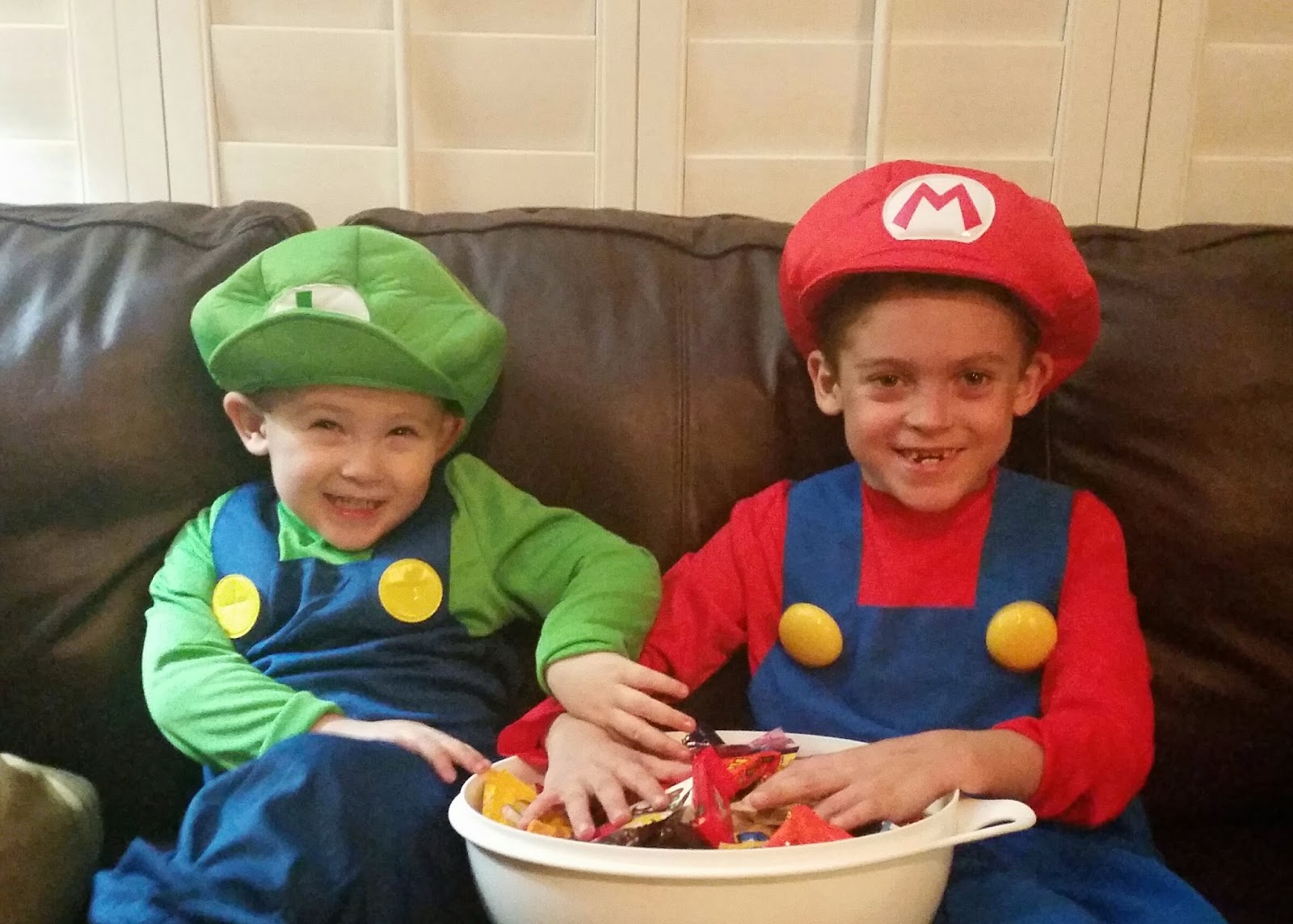 I ate candy all weekend but went sugar free again on Monday morning.  I've only been tempted by the candy once this week.  Tonight, actually.  But I ate some protein and felt better immediately.
Posted by Natalie at 10:29 PM

Seriously? Who just leaves out candles? That cardinals pumpkin is pretty impressive. Was it real or a craft one?
What a fun Halloween! How many "theme" years do you think you can squeeze out of the boys?

Oh my goodness, they are the cutest Mario and Luigi ever! It looks like they were fighting over the candy bucket, and Luigi's little grins are the cutest. Evan and Brody would definitely fight over their candy stash so when we got home, I sat and divided their shares equally giving Brody only what I felt he could "handle." This stash should last a very long time as I won't let them have more than a piece or two a day. Mean mommy! Well, that is if Mommy and Daddy don't steal too much! ;-)

Oh and what was with those jerks and their "real" candles burning. I think their house seriously needs to be egged. Haha!

I'm sitting here trying to imagine what it's like to trick-or-treat in warm weather...