If you reach far, far, far back into your memory, you may remember that Elliott was a very late walker.  He was still within the realm of "normal" but just barely so.  He started walking on Mother's Day when he was almost 17 months old.

This is what he looked like independent walking for the first time. 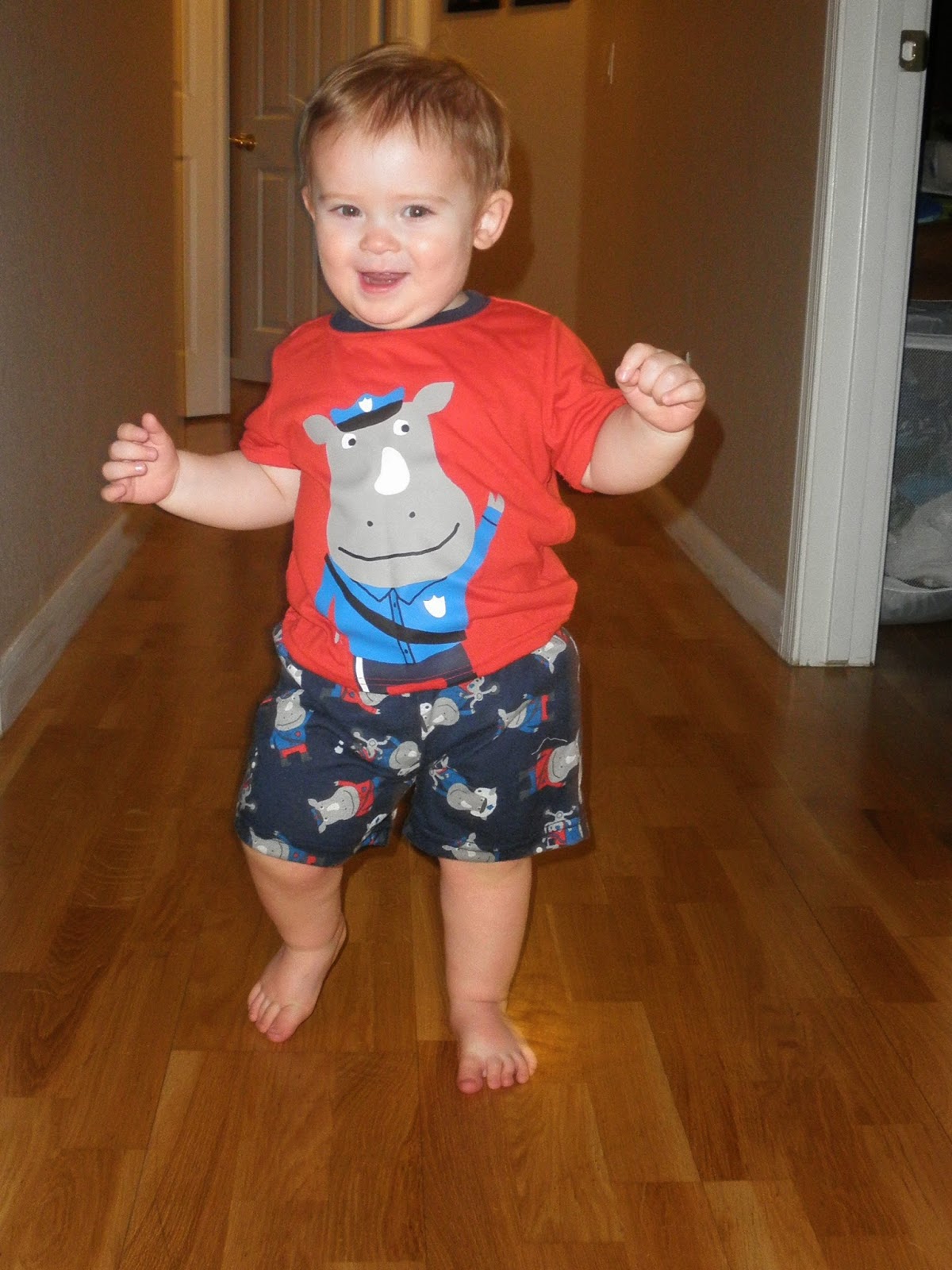 Fast forward almost 2 years to just after Christmas.  We were becoming more and more aware that Elliott fell a lot.  A whole lot.  He was falling every day and sometimes multiple times a day.  There was something about the combination of him turning 3 and the frequency that he was falling that made me decide it wasn't right.  It wasn't OK.  There was something wrong.  I could no longer blame it on him being a toddler or being clumsy.  I was also growing increasingly concerned that he was going to break his wrist during a fall.  And his knees and elbows were always scabbed over.

So at the end of February, after he fell at story time 6 times in about 20 feet, I called to get a Physical Therapy evaluation appointment for him.  Phoenix Children's Hospital was totally booked (we're still technically on the waiting list for an eval) but Cardon Children's Hospital only had a month long wait.

We went for the evaluation on March 31st.  I was worried that the physical therapist wasn't going to see any of the things that I saw and that I was worried about.  I really didn't want to be told that he was just a little clumsy because I knew it was much more than that.

So basically Elliott has a combination of a weak core, poor body awareness/proprioception and habitual fixing patterns in his pelvis and shoulders.  The fixing patterns are compensatory methods/habits he has developed to deal with the other issues.  The PT said that it is pretty common to see kids that had very early gastrointestinal problems end up with these very same issues as preschoolers and older kids.  Basically, he had liver problems, he was in pain and uncomfortable because of those liver problems, so as his proprioception was developing and his core muscles were developing, he shut those systems down so he wouldn't have to be uncomfortable.

There are also some issues with his visual tracking and vestibular processing, which could be related to proprioception as well.

The whole report is 4 pages long, so I won't bore you with all of it, but these are several of the parts I found interesting/informative.

(You might have to maximize them to make the print bid enough to actually read anything.) 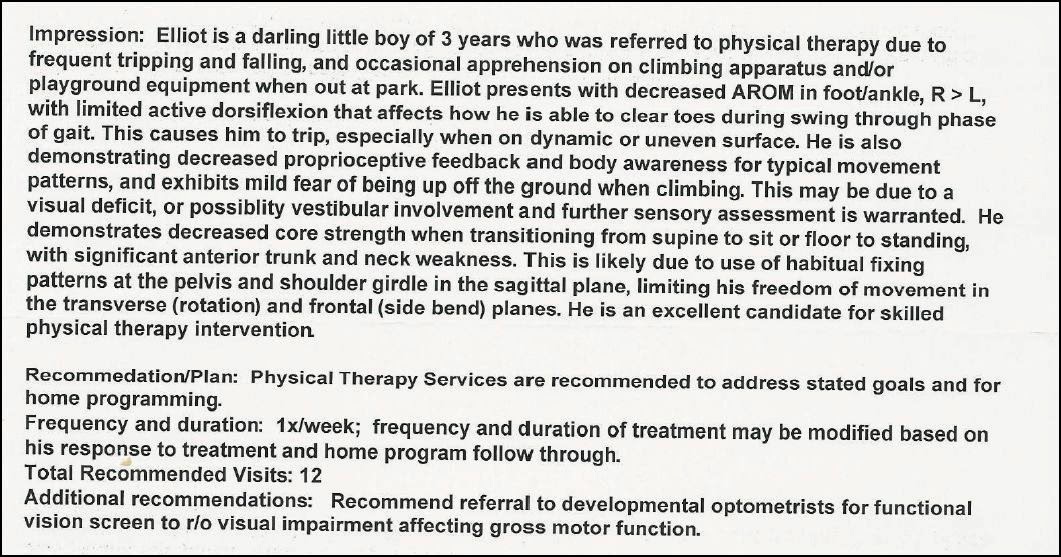 This was during the evaluation.  The PT had him take his shirt off so she could watch his core and back muscles moving.  That was when she pointed out to me how much he lifts his shoulders to compensate for his weak core.  I had never noticed. 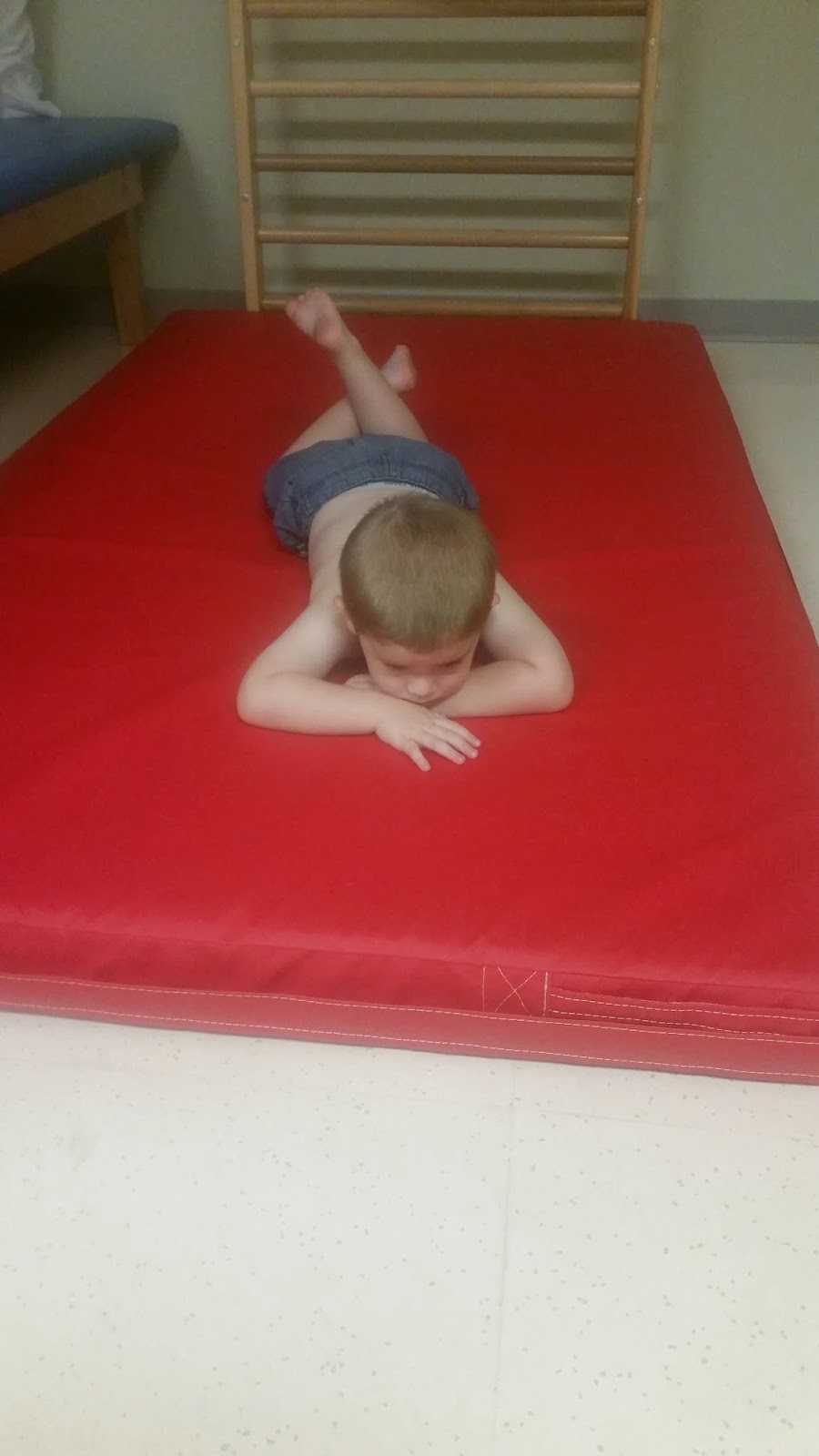 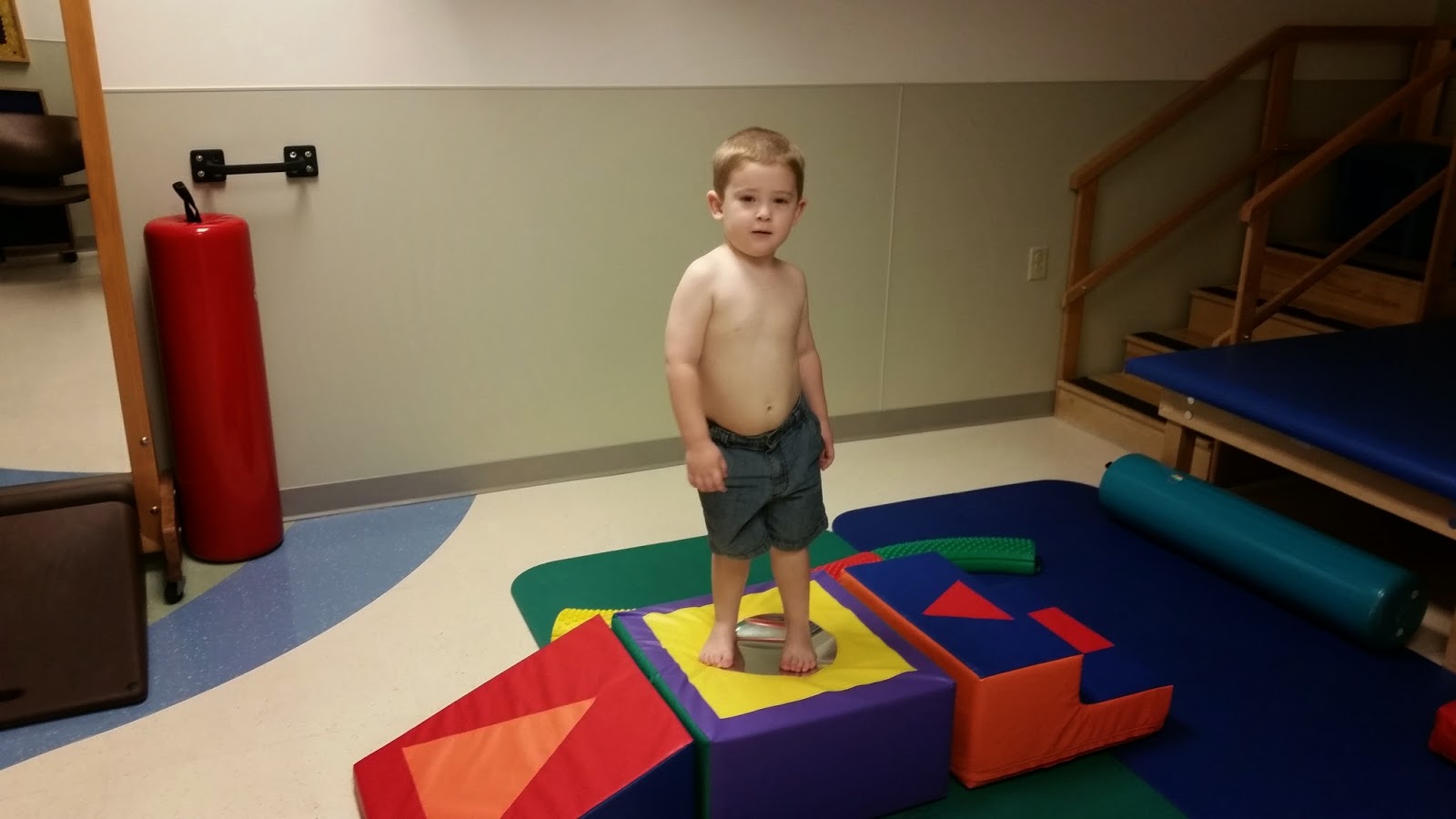 It took a few weeks for insurance to approve therapy and get us on the schedule, but we started attending an hour session last week. 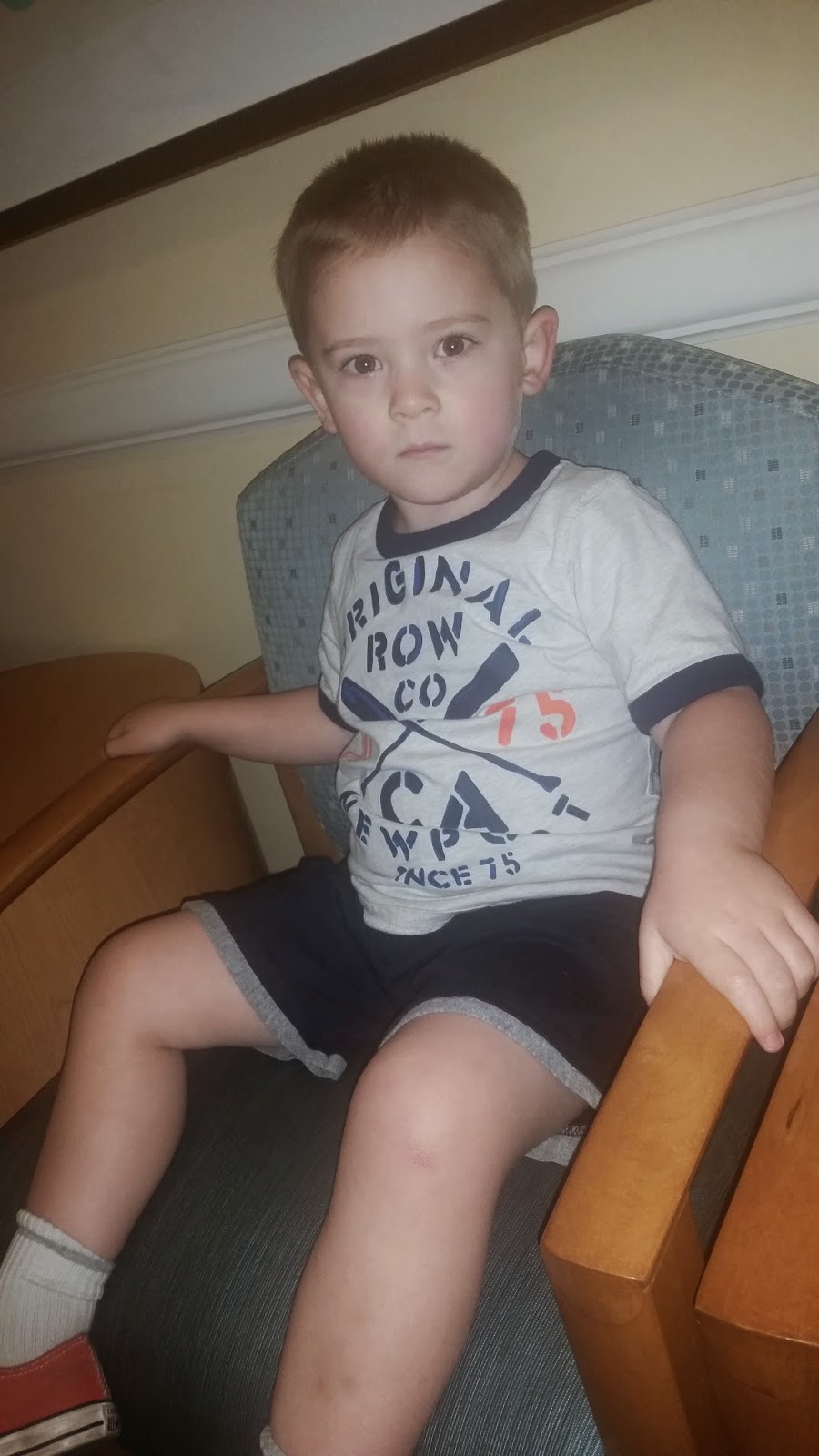 The actual PT has tons of experience.  So much experience, in fact, that she has a graduate student, Ms. Emily, interning with her.  Ms. Emily is the one actually providing the therapy until her internship ends in early June.   And I'm totally cool with that.  I was a graduate student once too and I know she is totally capable of doing the job.  Plus Ms. Emily is young and energetic.

Elliott has a really, really hard time walking up and down steps with a right foot, left foot pattern.  He puts both feet on one step before moving up to the next. 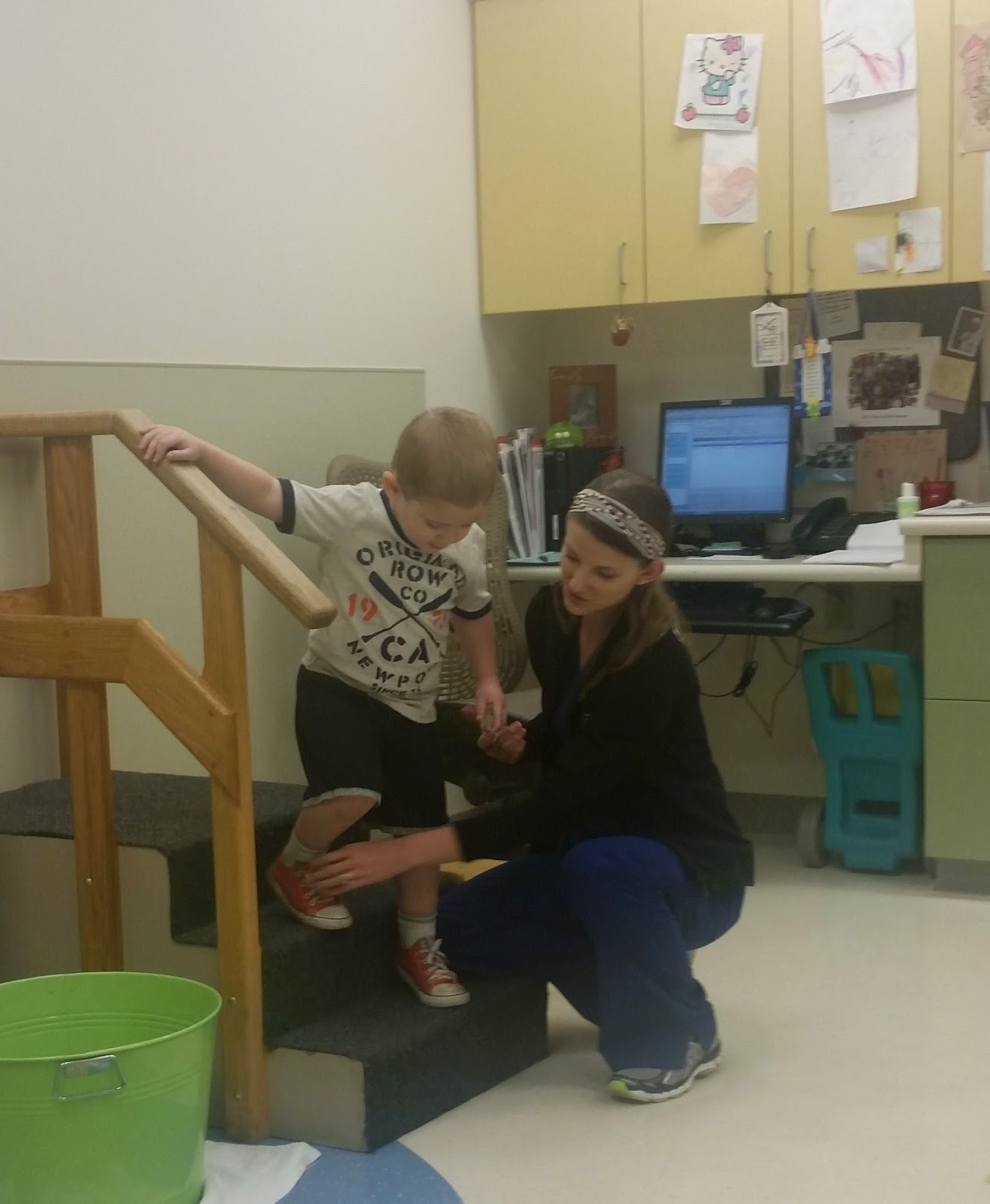 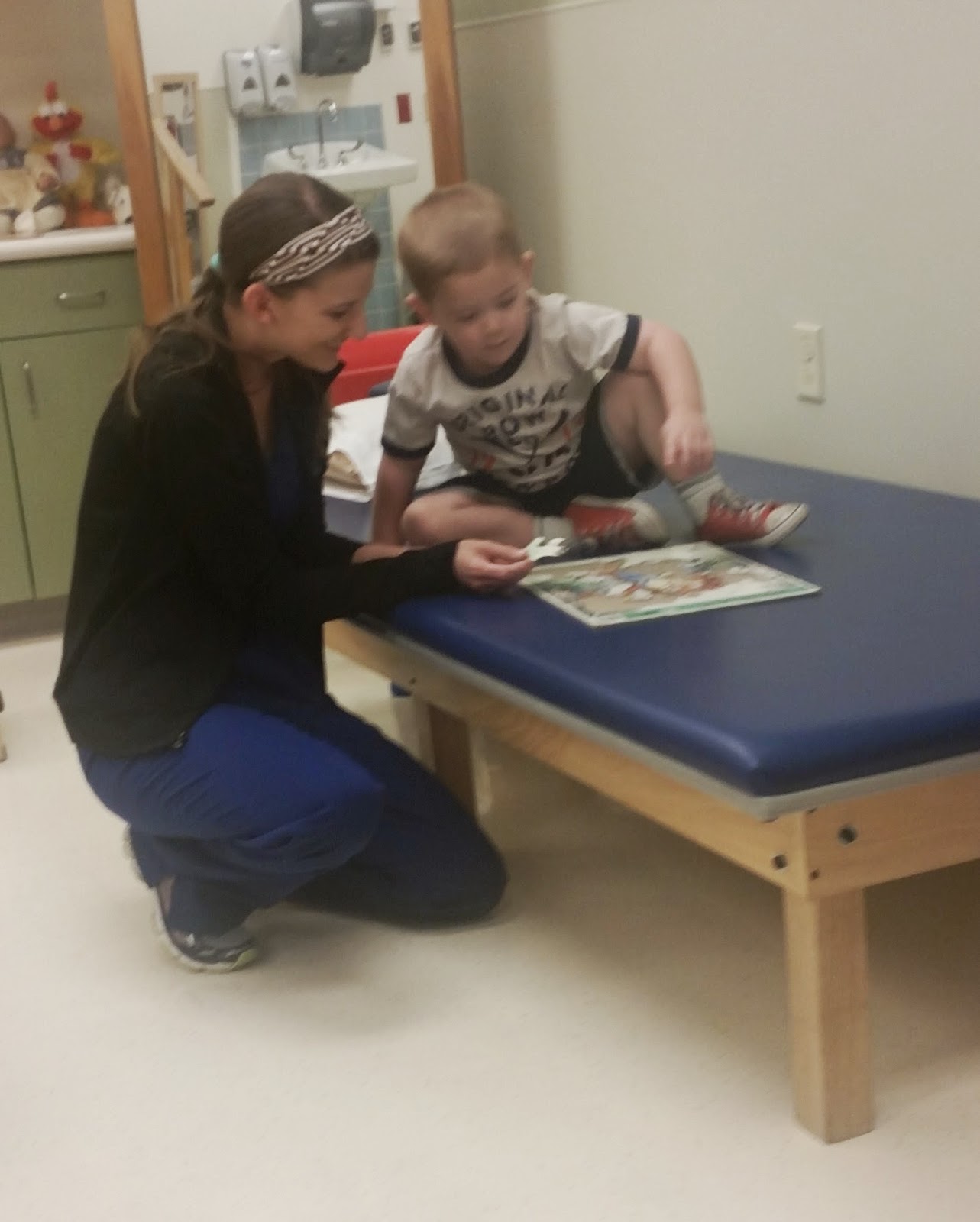 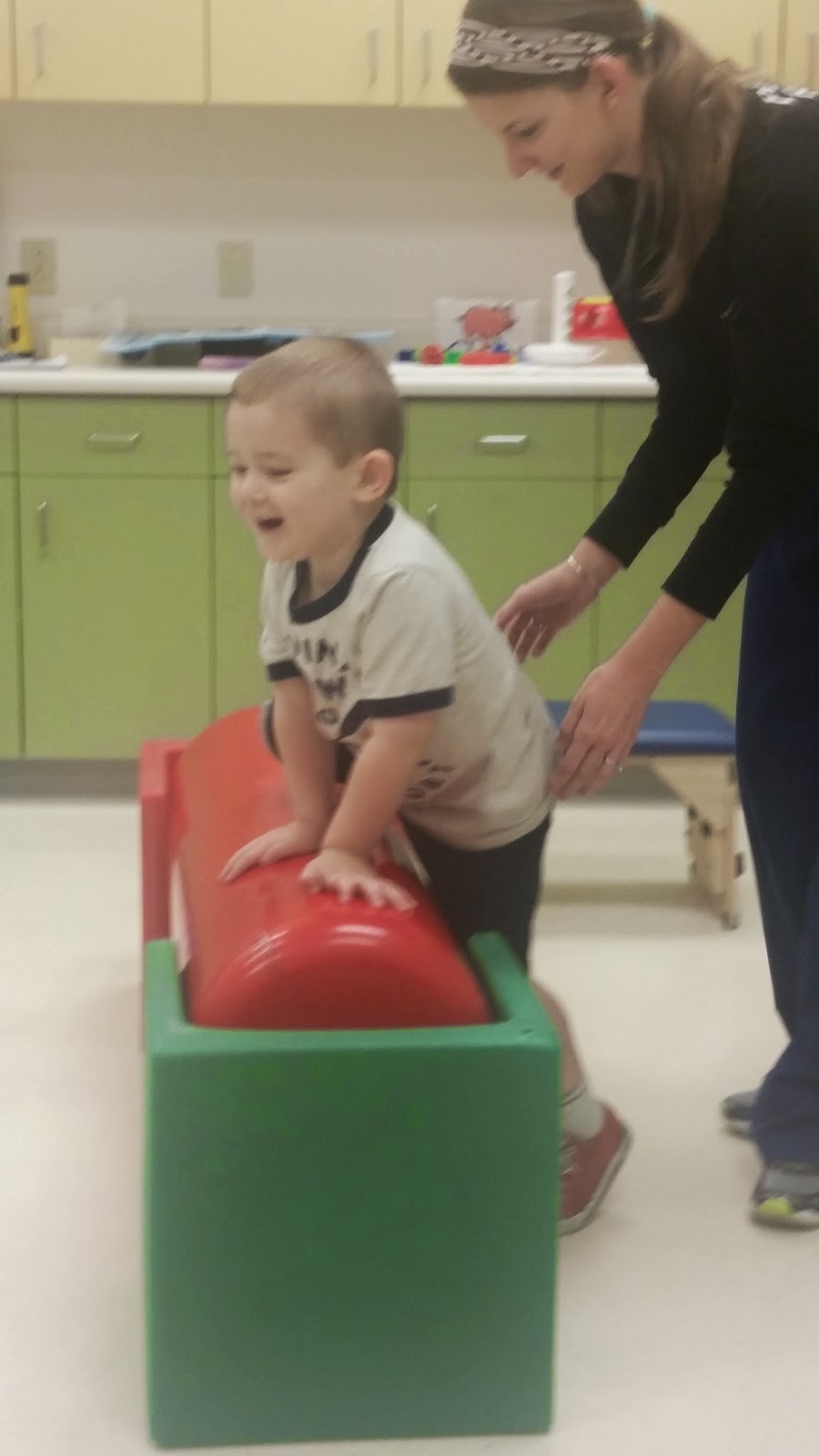 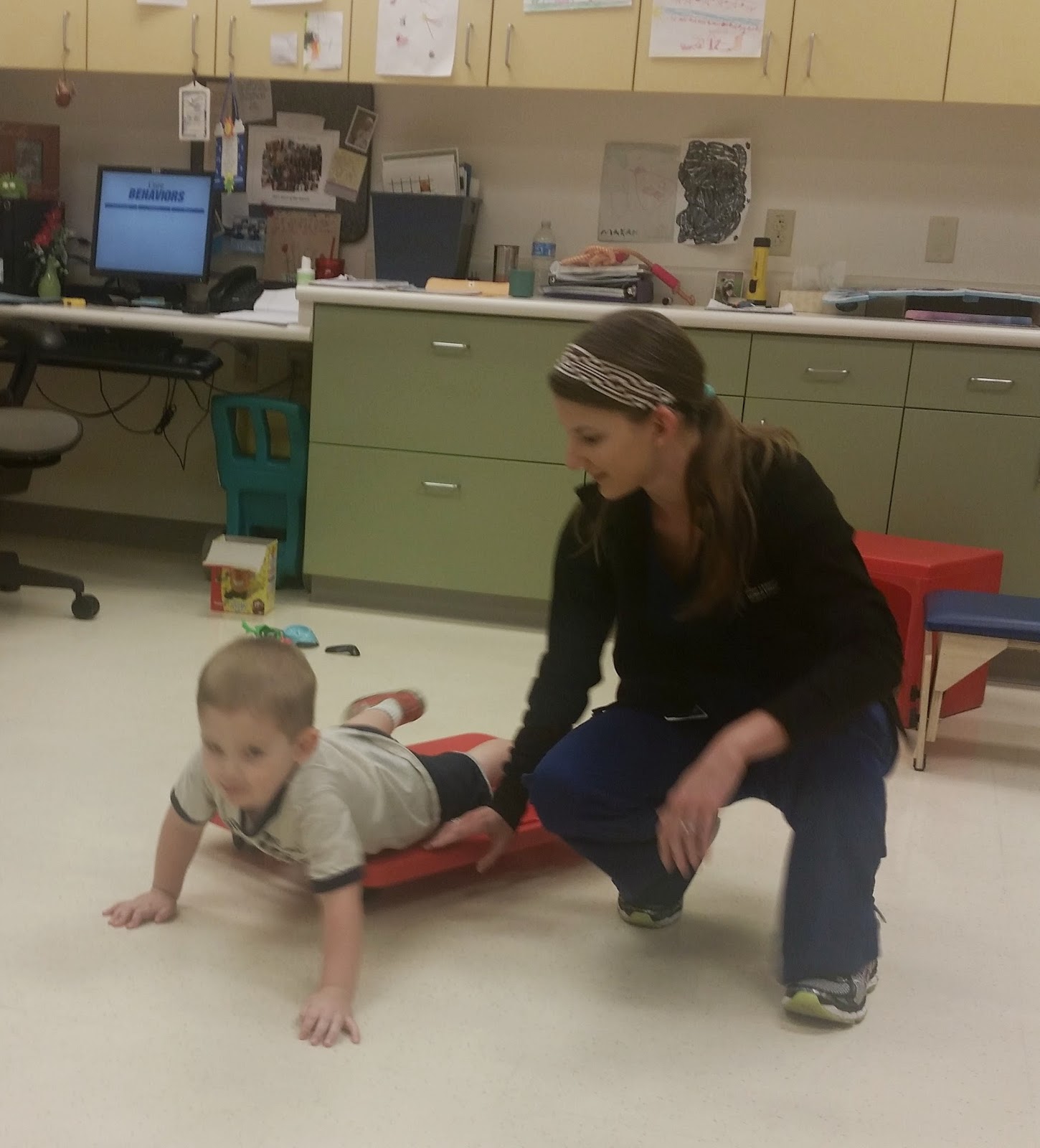 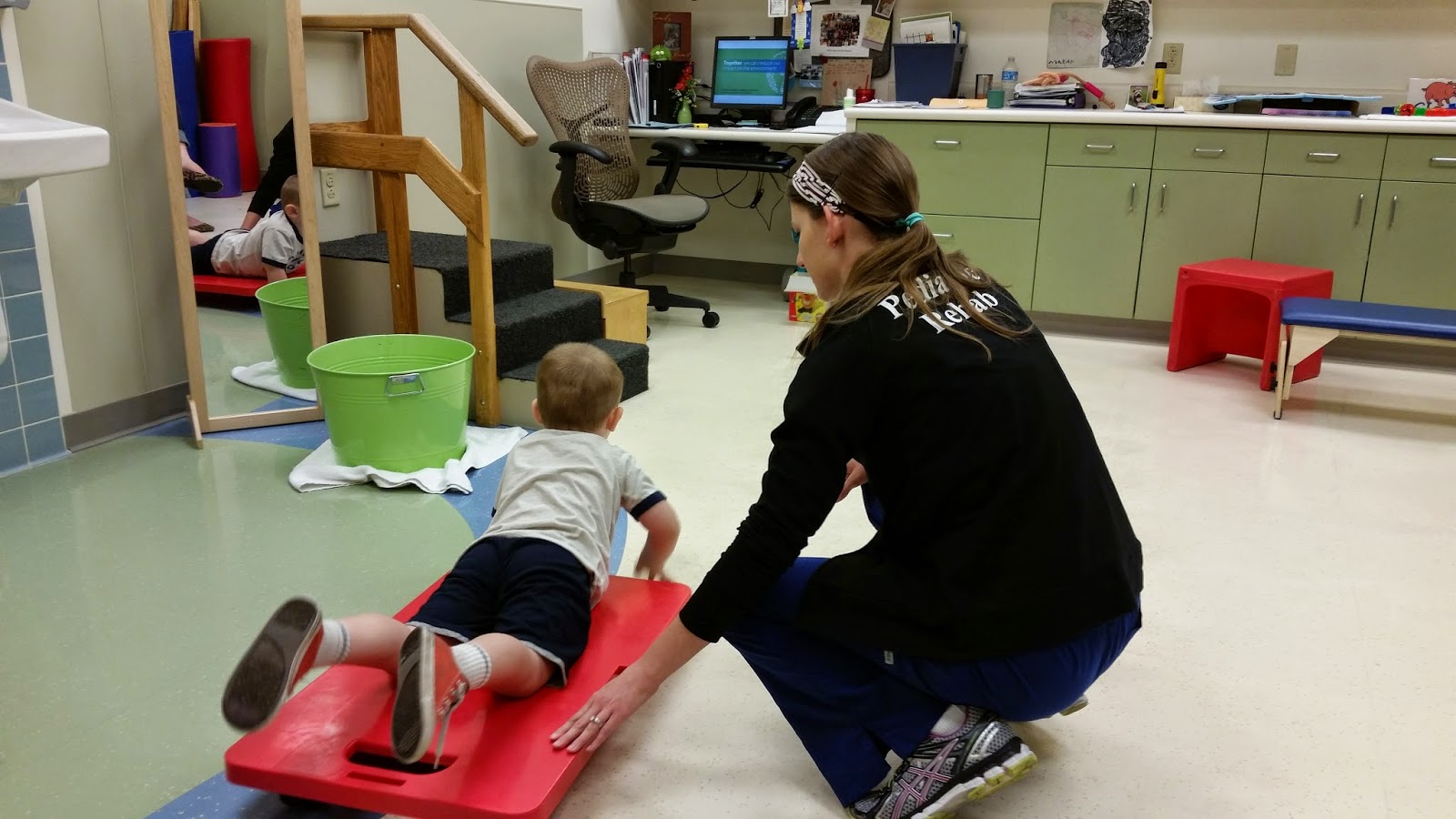 After the first session we decided, spur of the moment, to go have lunch with daddy.  It seemed like the day called for a celebration. 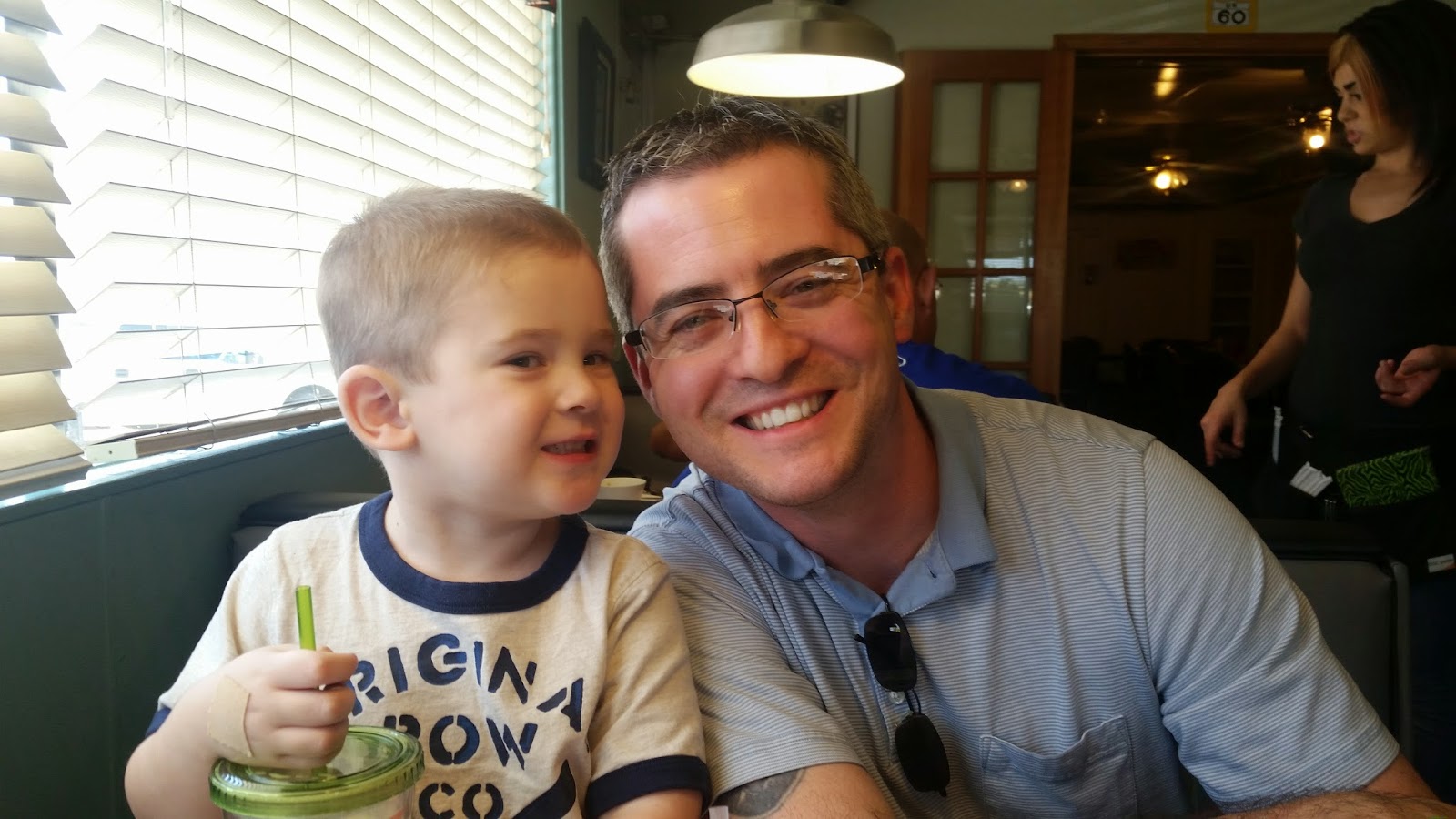 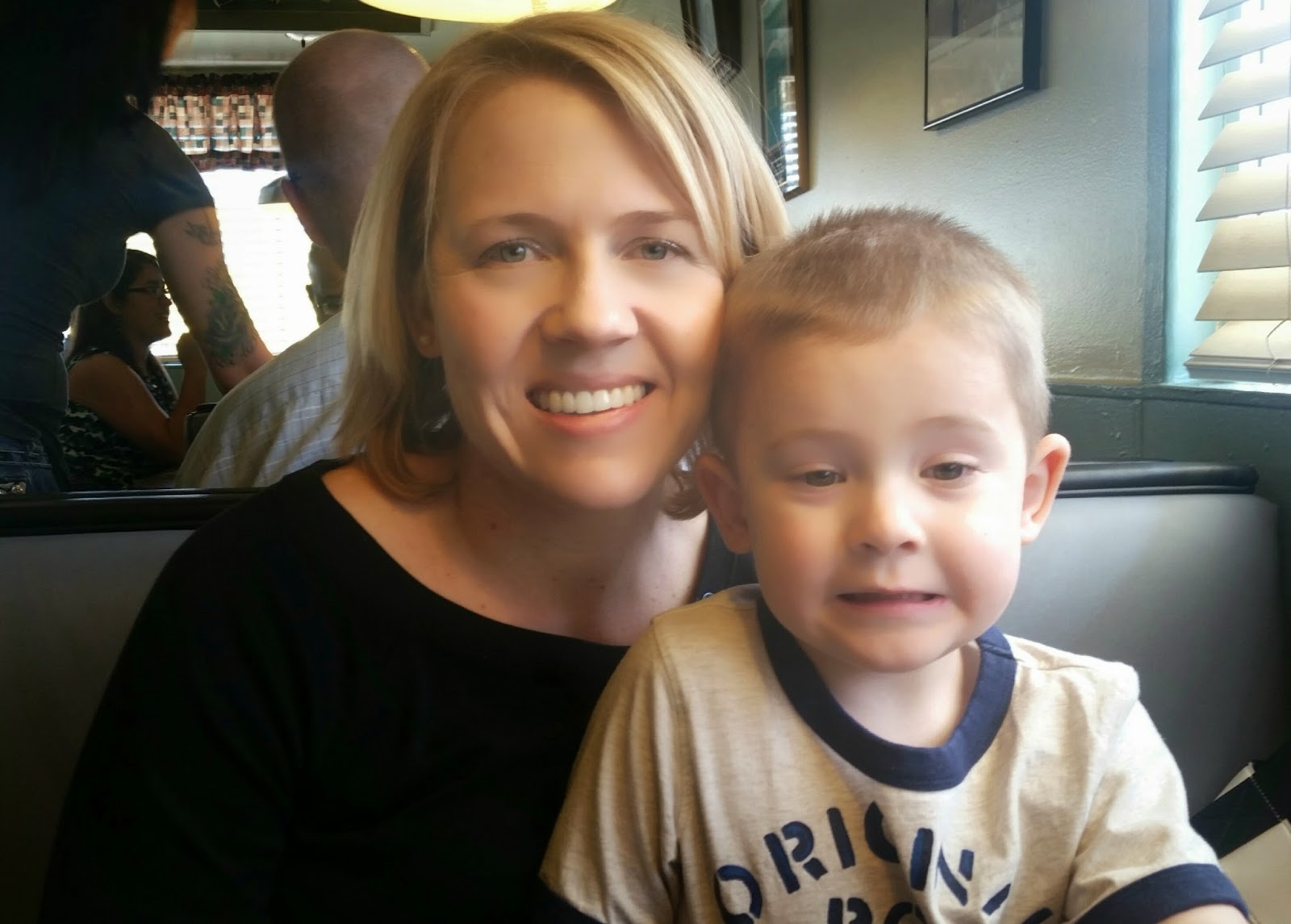 Session number 2 ended with a spin on the therapy trike.  Elliott pretty much loved it. 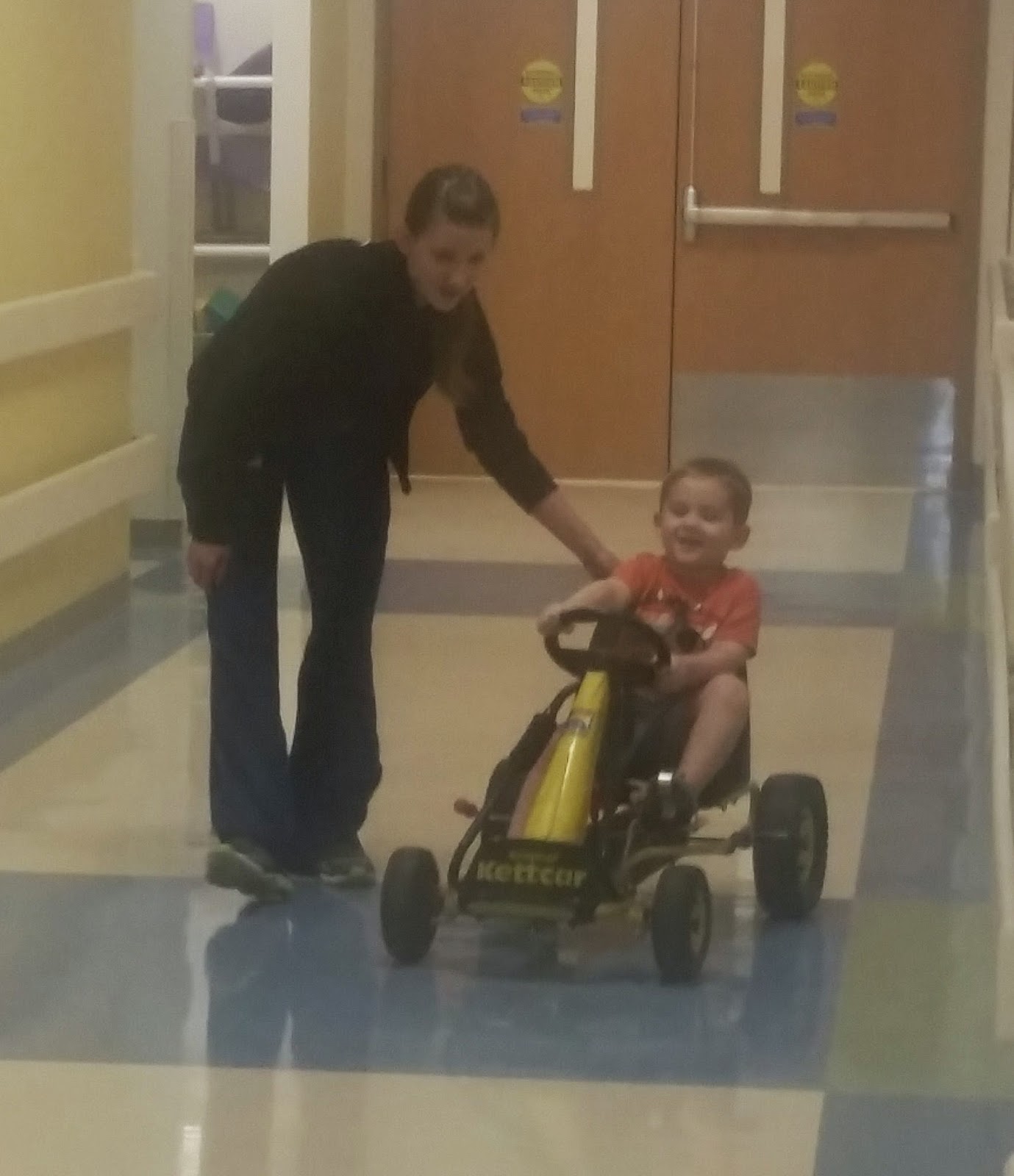 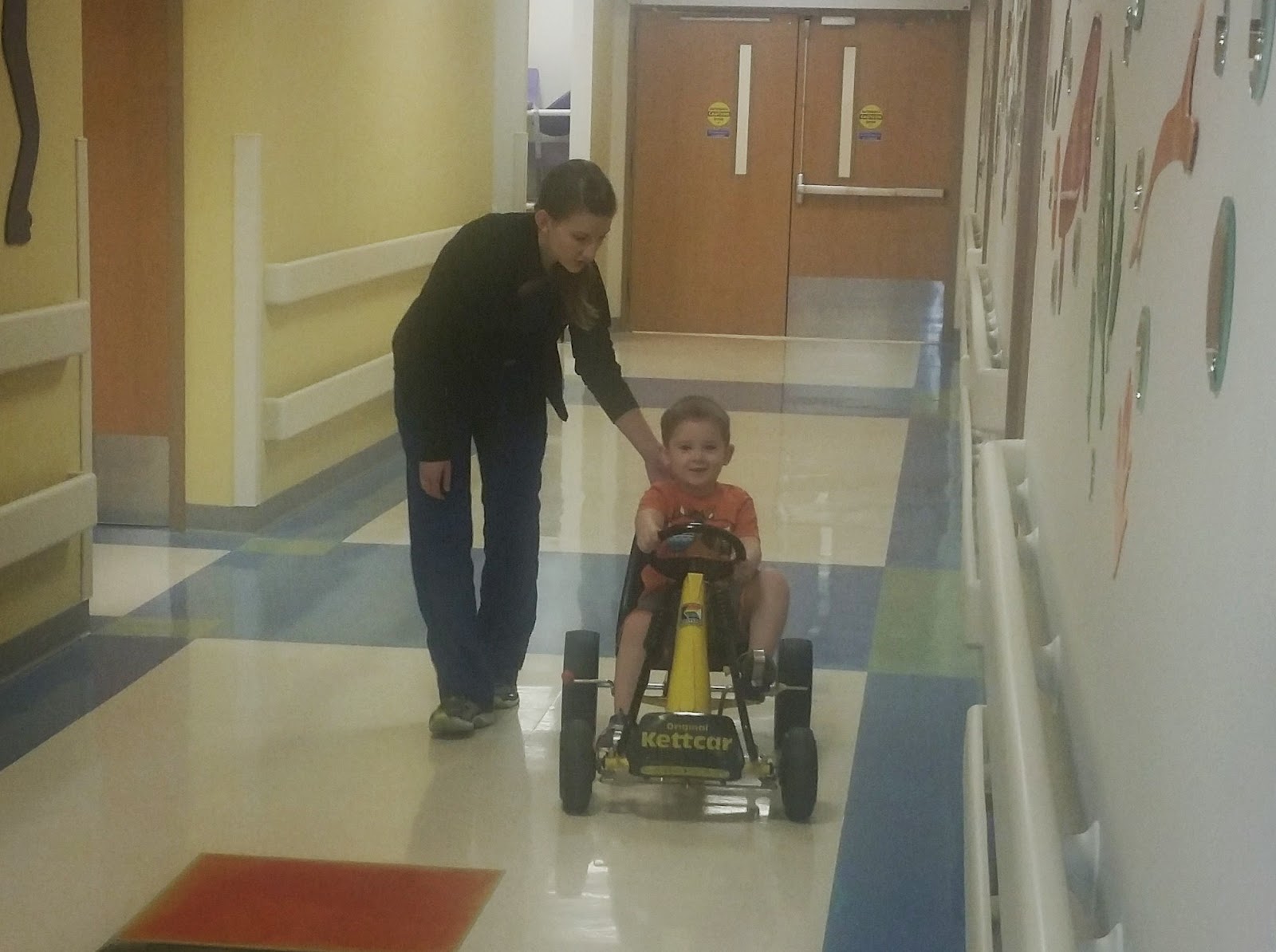 So far I've been really happy with our sessions.  I have a ton of activities to work on at home and he really likes going because it just seems like play time.

Now that we've started I'm going to get him in for a developmental vision exam.  We'll see how long the waiting list is for that.

Oh man! I know I read about him walking at 17 months, but I really didn't even think of it as a problem until this post. He has always seemed to have so much energy with a touch of stubbornness (like Brody) about doing things on his own time. I am so glad you knew that he was falling way too much to be normal and had him evaluated. And I actually really like reading reports like these because it was a big part of my job as a legal assistant in the workers' comp area. I feel like I could be in the medical profession and diagnose many orthopedic issues with all my training. Haha! And Elliott really does look like he enjoys these sessions. I imagine he has very strong arm muscles as compensation for his other weaker muscles. Oh and it sounds like you and I have both experienced the incompetency of our OB physicians. Sigh. Yours not recognizing your history of pre-term labor complications and mine not recognizing my history of needing inductions for going too long past my due date without going into labor. Both have very serious consequences that these physicians need to take more seriously. So should they have put in a stitch for you to prevent your going into early labor and didn't or was there something else they should have done?