(I know I sound like a broken record, but I'm going to remind you, again, to enter my first ever giveaway for my 1,000th post.  You can do it HERE.)
We were still in Tucson on St. Patrick's Day morning, so it was a huge surprise to wake up to Winston in the kitchen.  That sneaky little elf.  It appears that he is using holidays as an excuse to check up on the kids.
He brought Spencer a green yoda cup and a green toothbrush and he brought Elliott some bubbles with a green lid and a green toothbrush.  He also brought a card from himself and Santa.  What an elf! 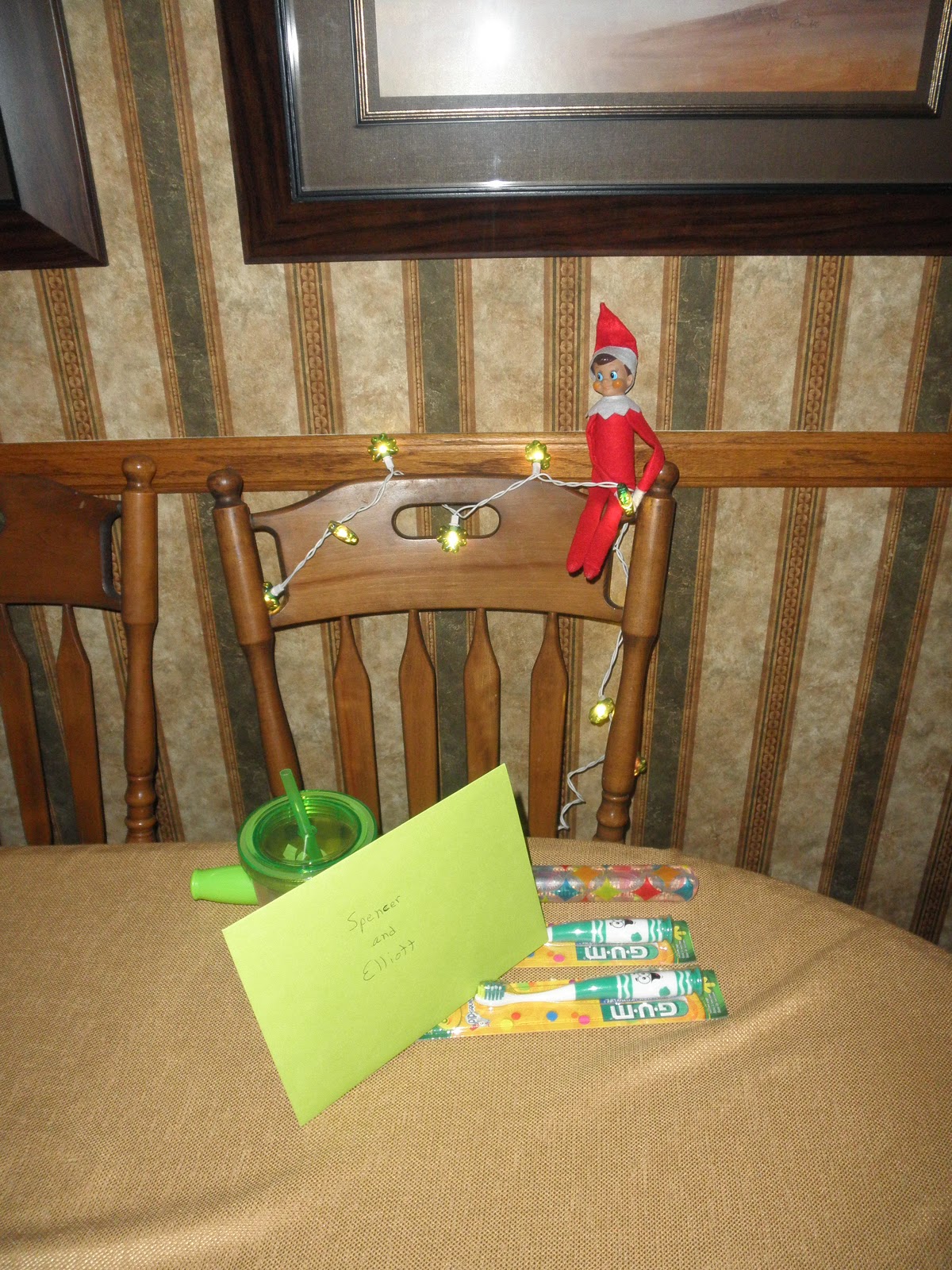 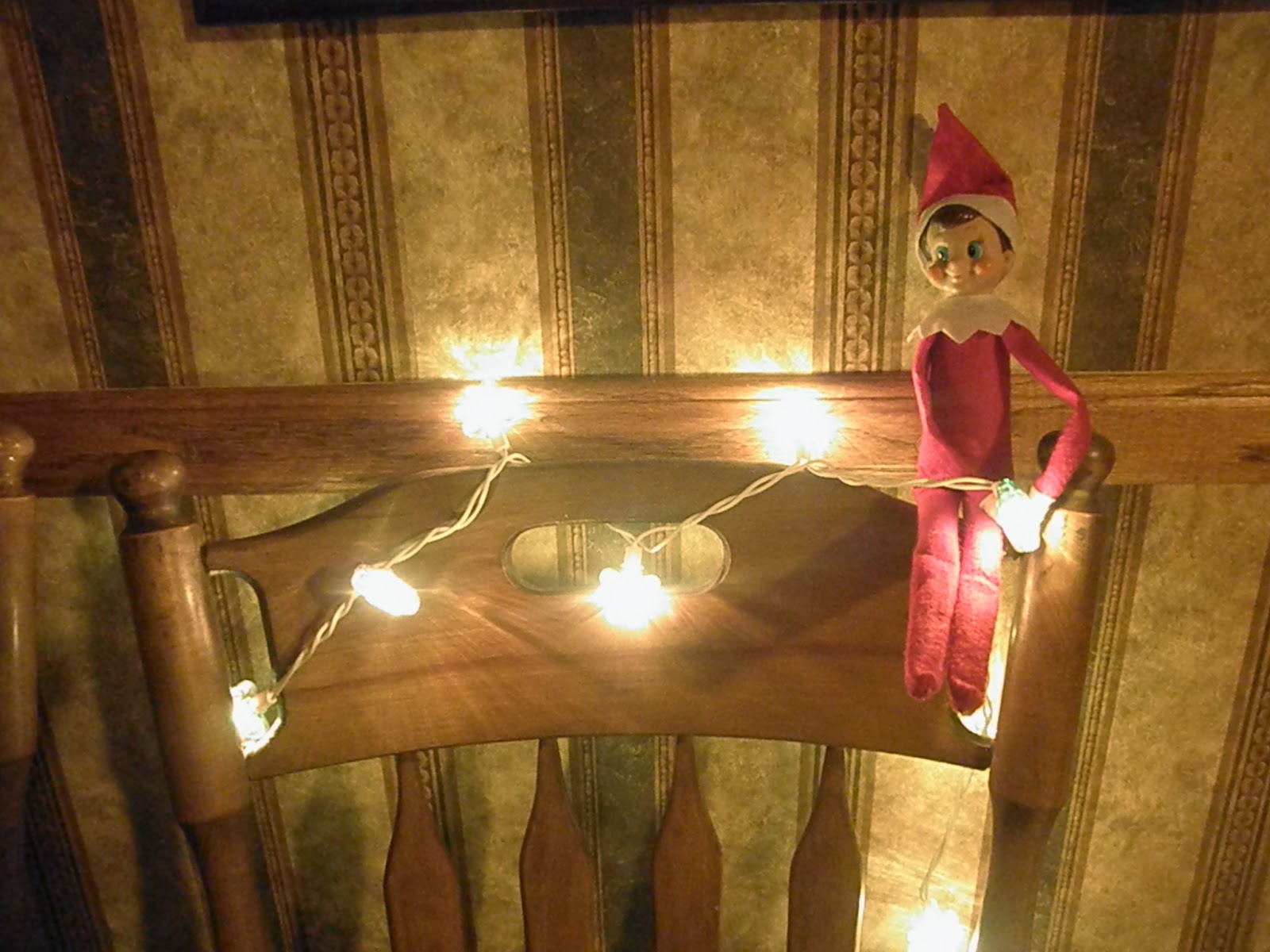 Both boys had new St. Patrick's day shirts so of course we needed to get holiday pictures.
This is what Spencer gave me to work with. 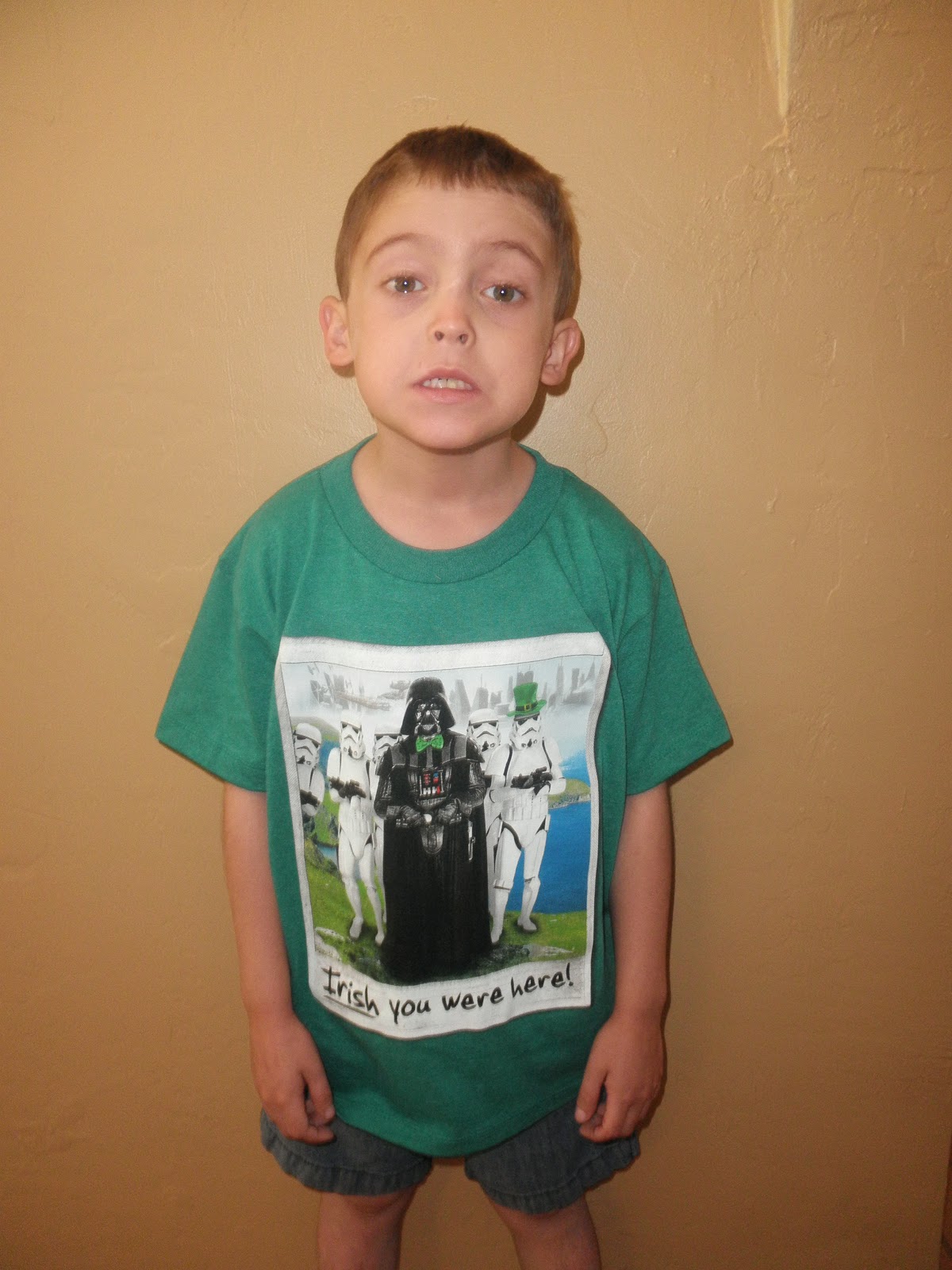 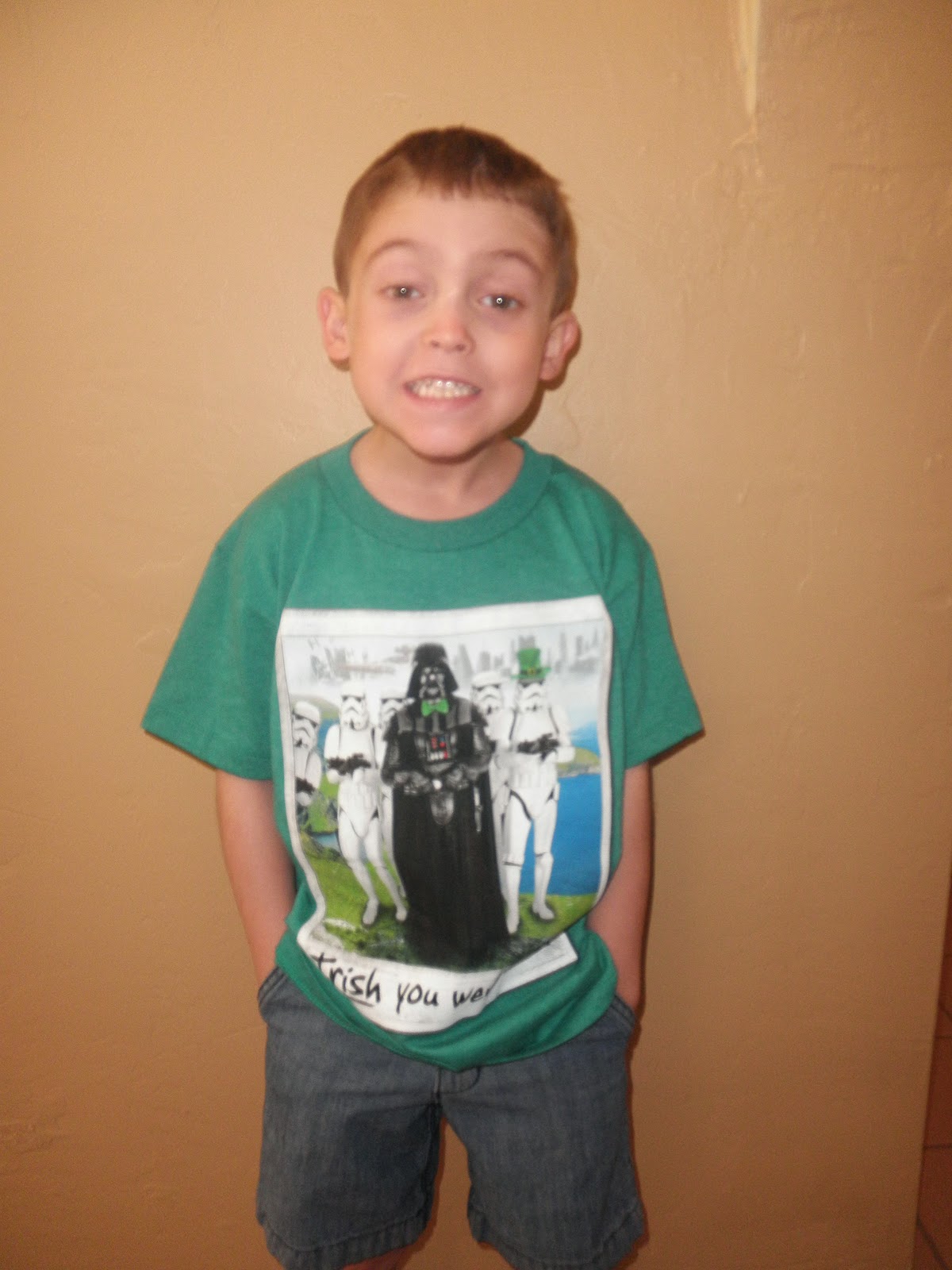 OK, this one is decent, but 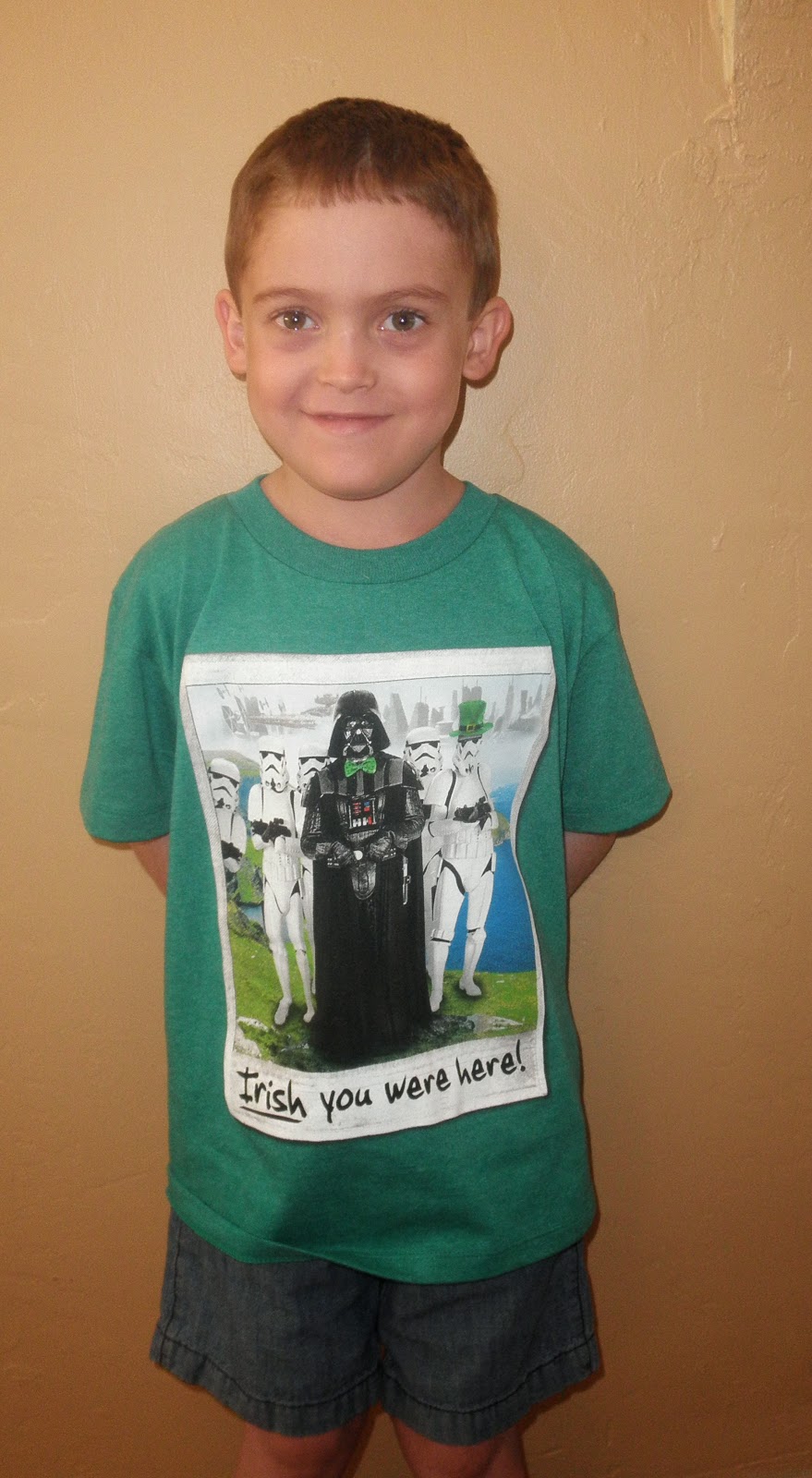 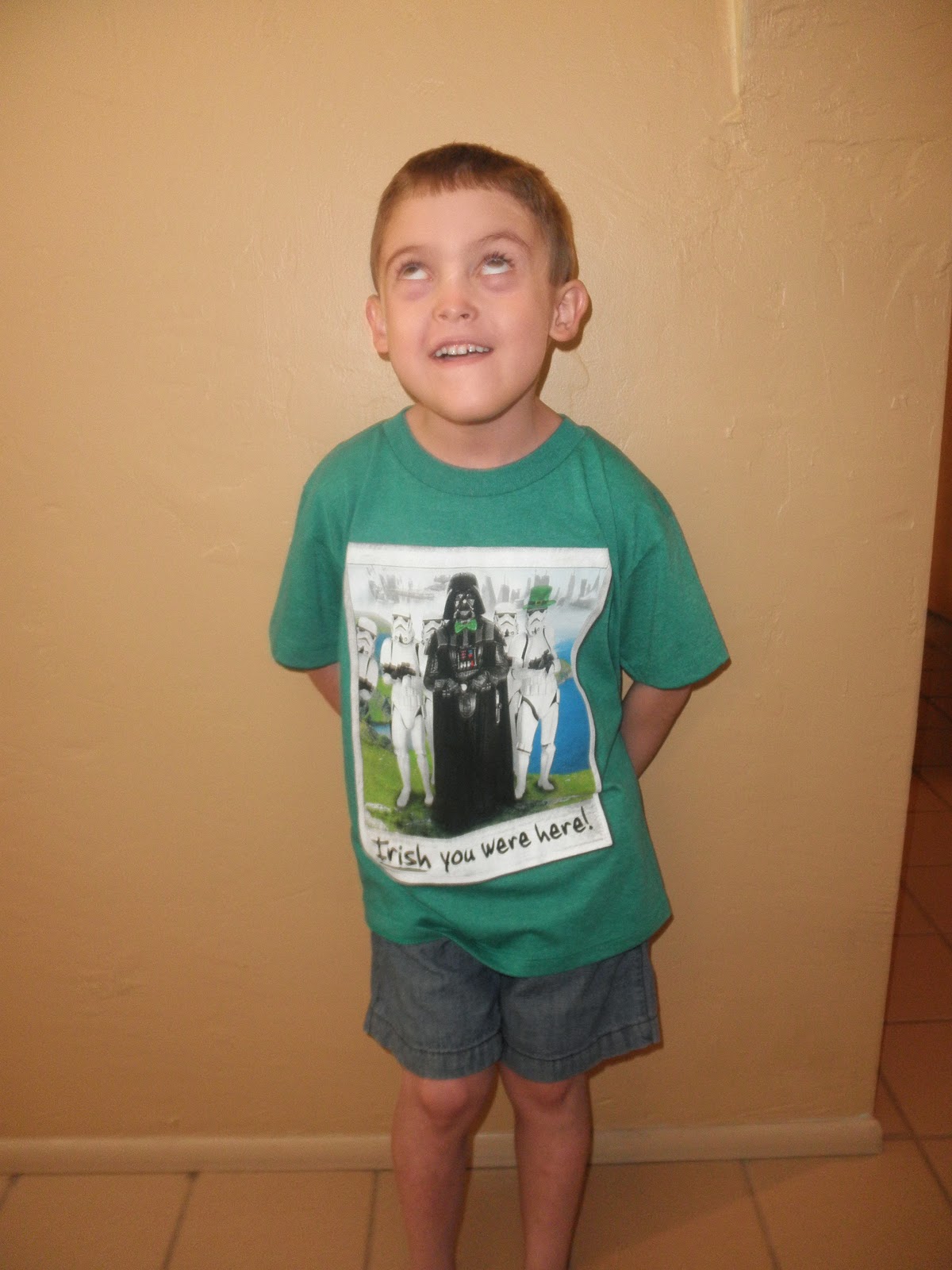 He wasn't any better when we brought Elliott in. 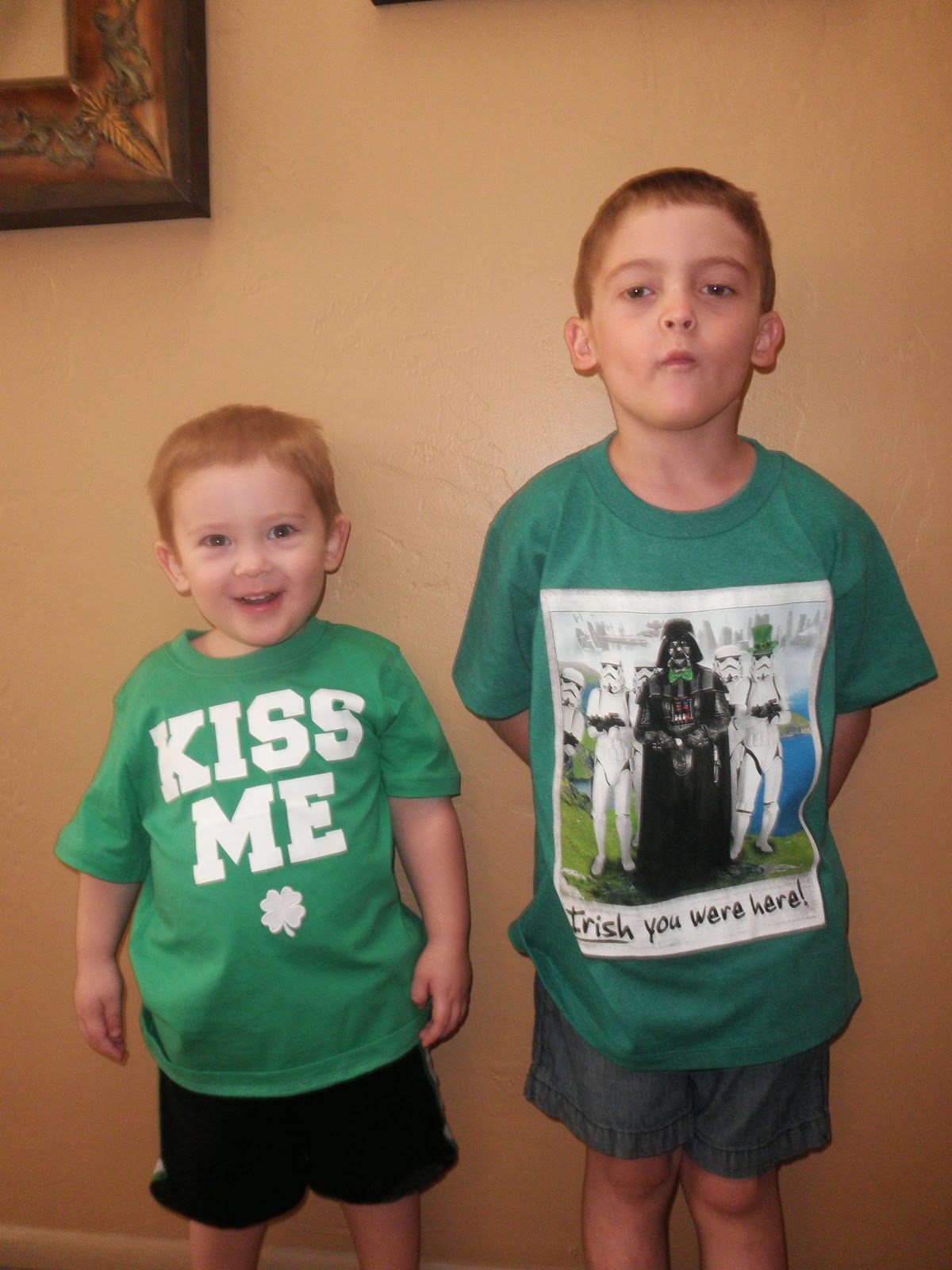 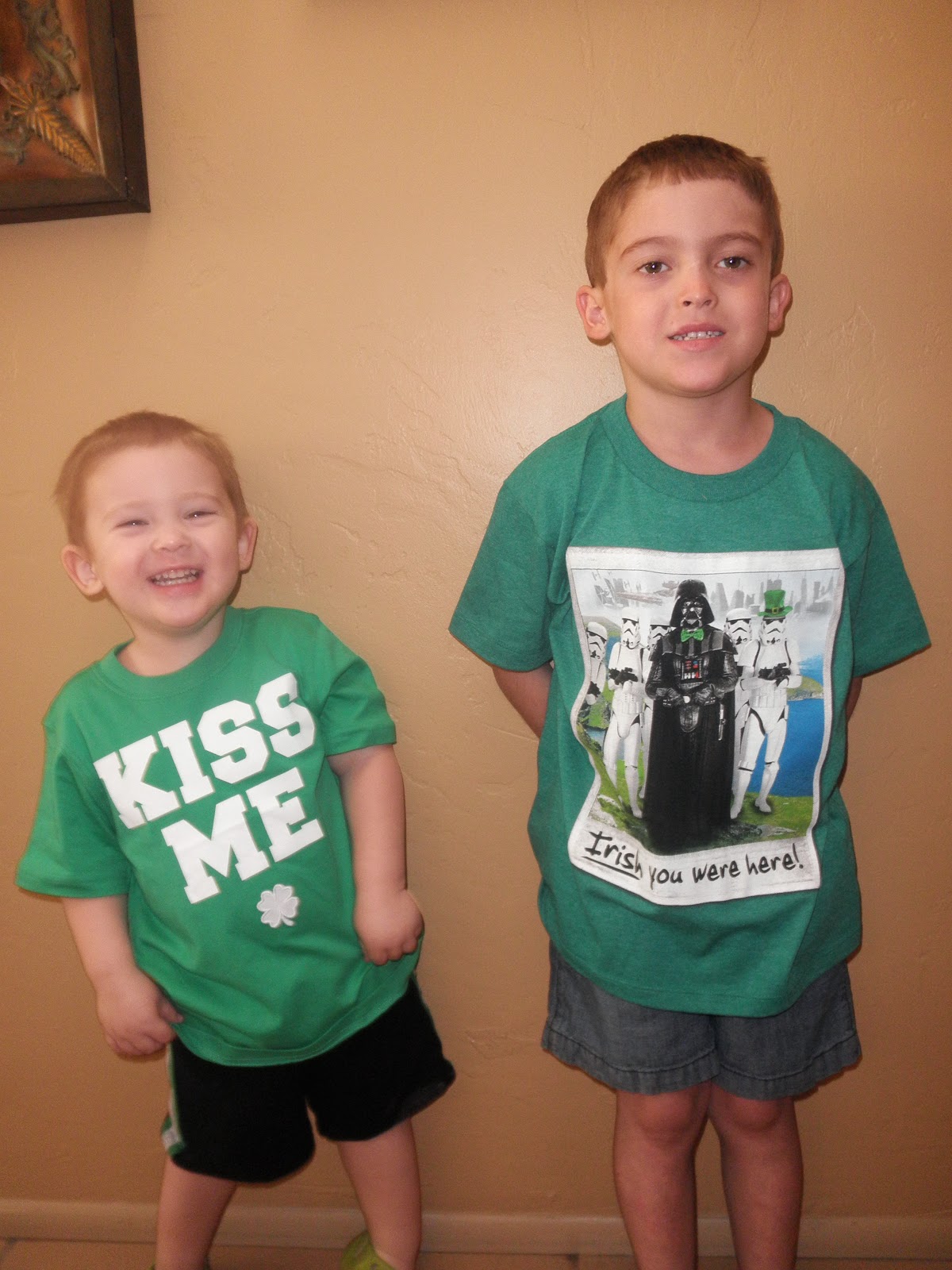 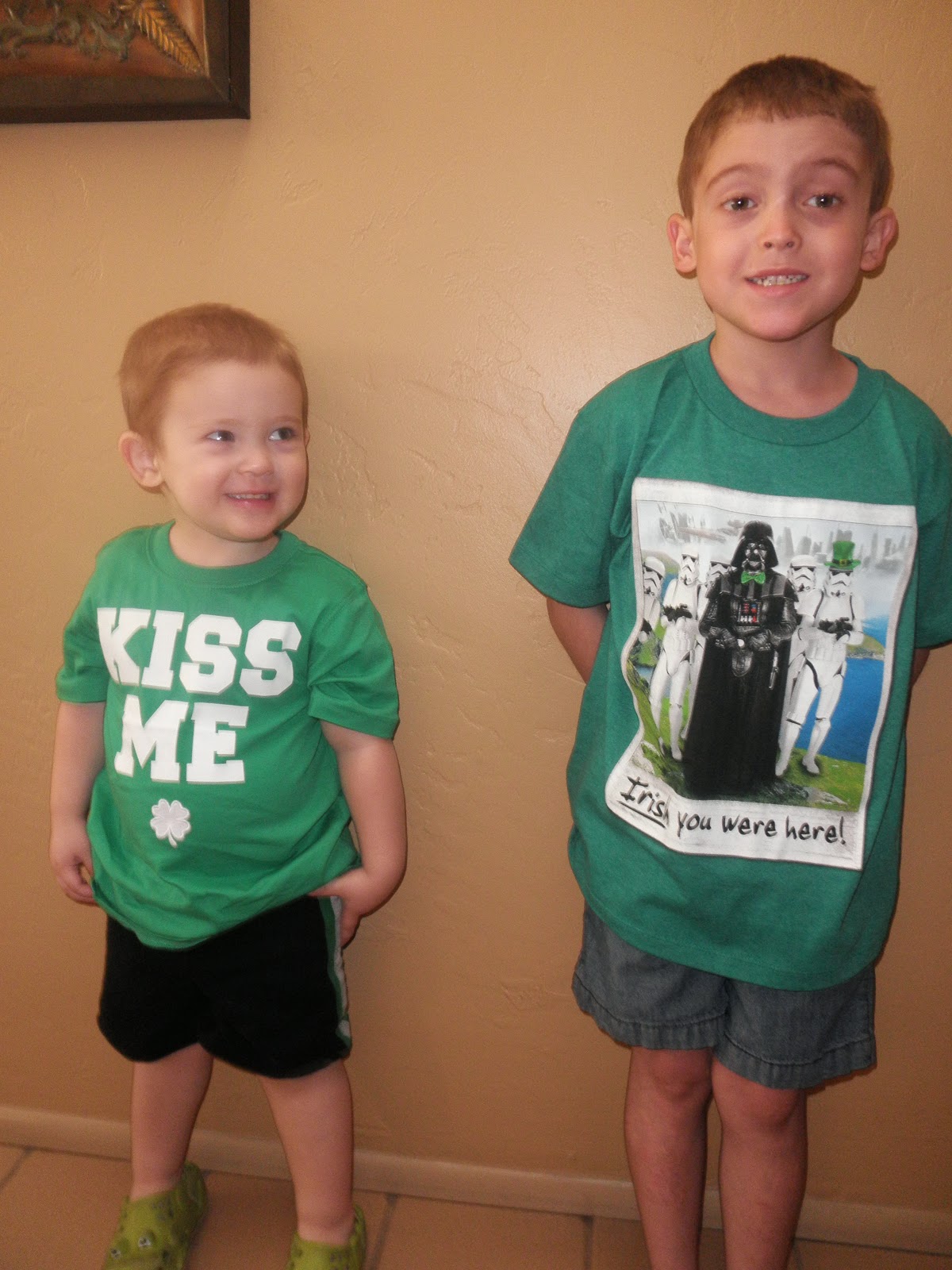 Right after this picture I asked him why he was ruining the pictures with his faker smile. 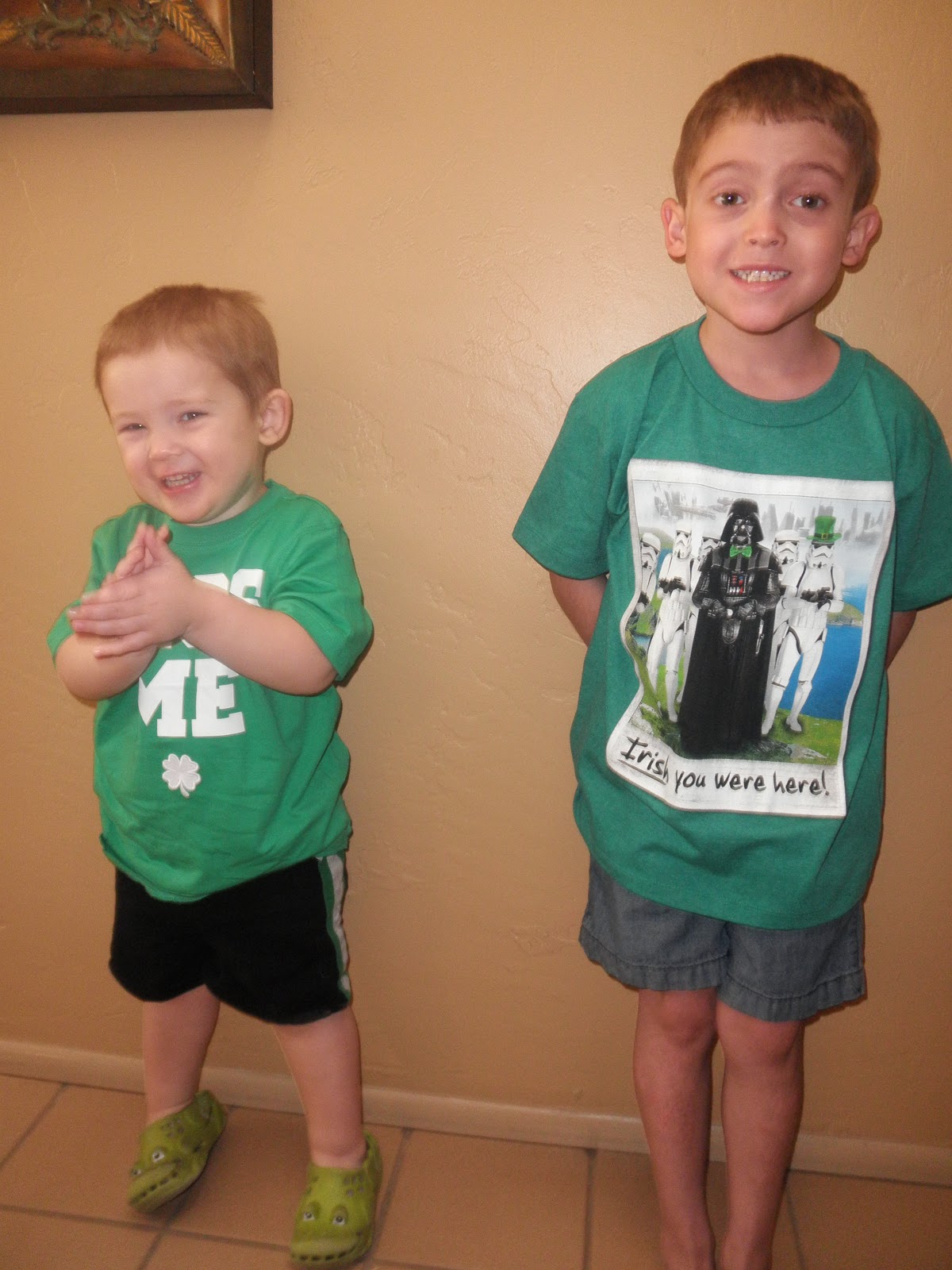 And this is what resulted: 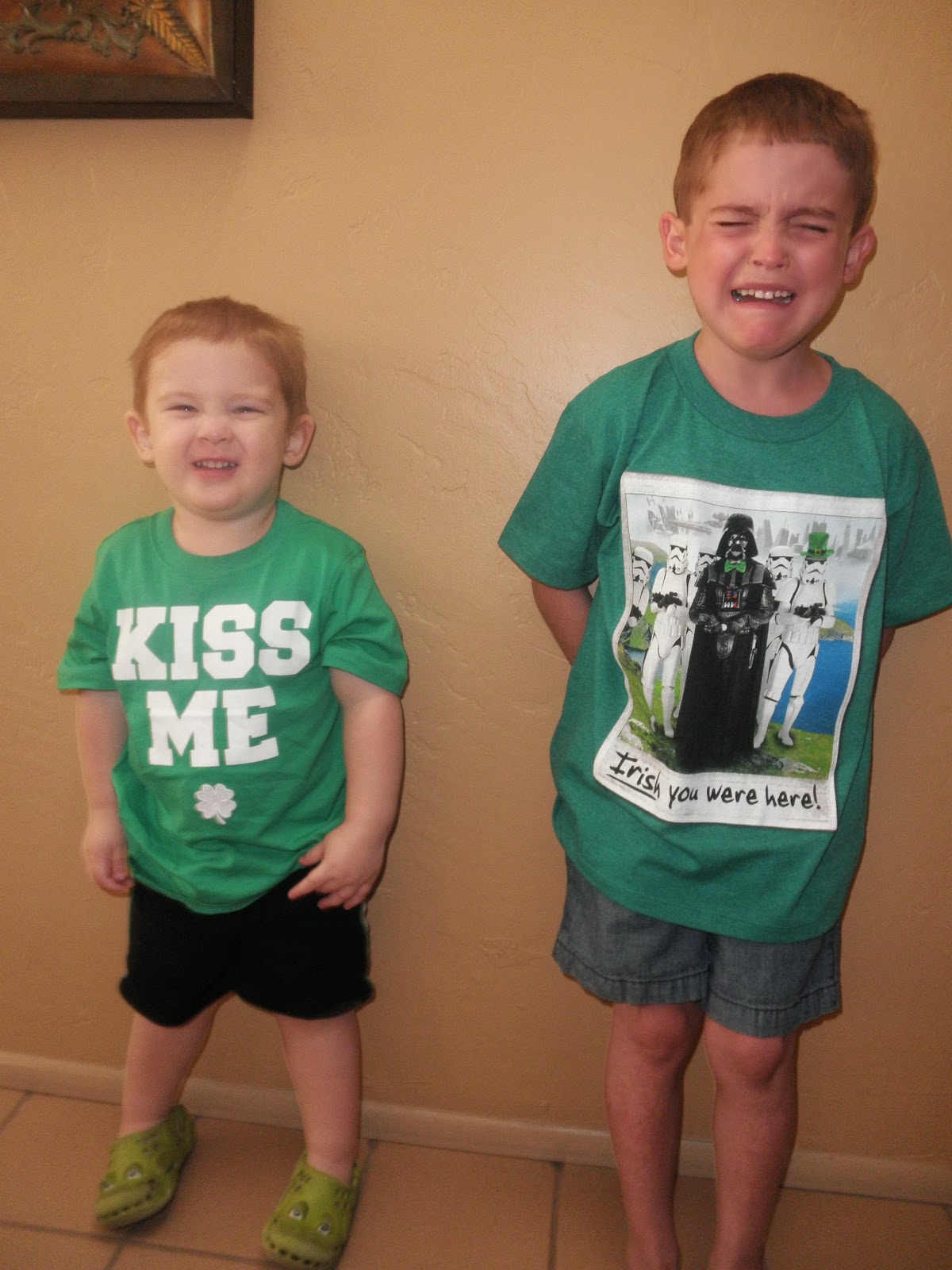 So we sent him away to calm down and focused on this kid. 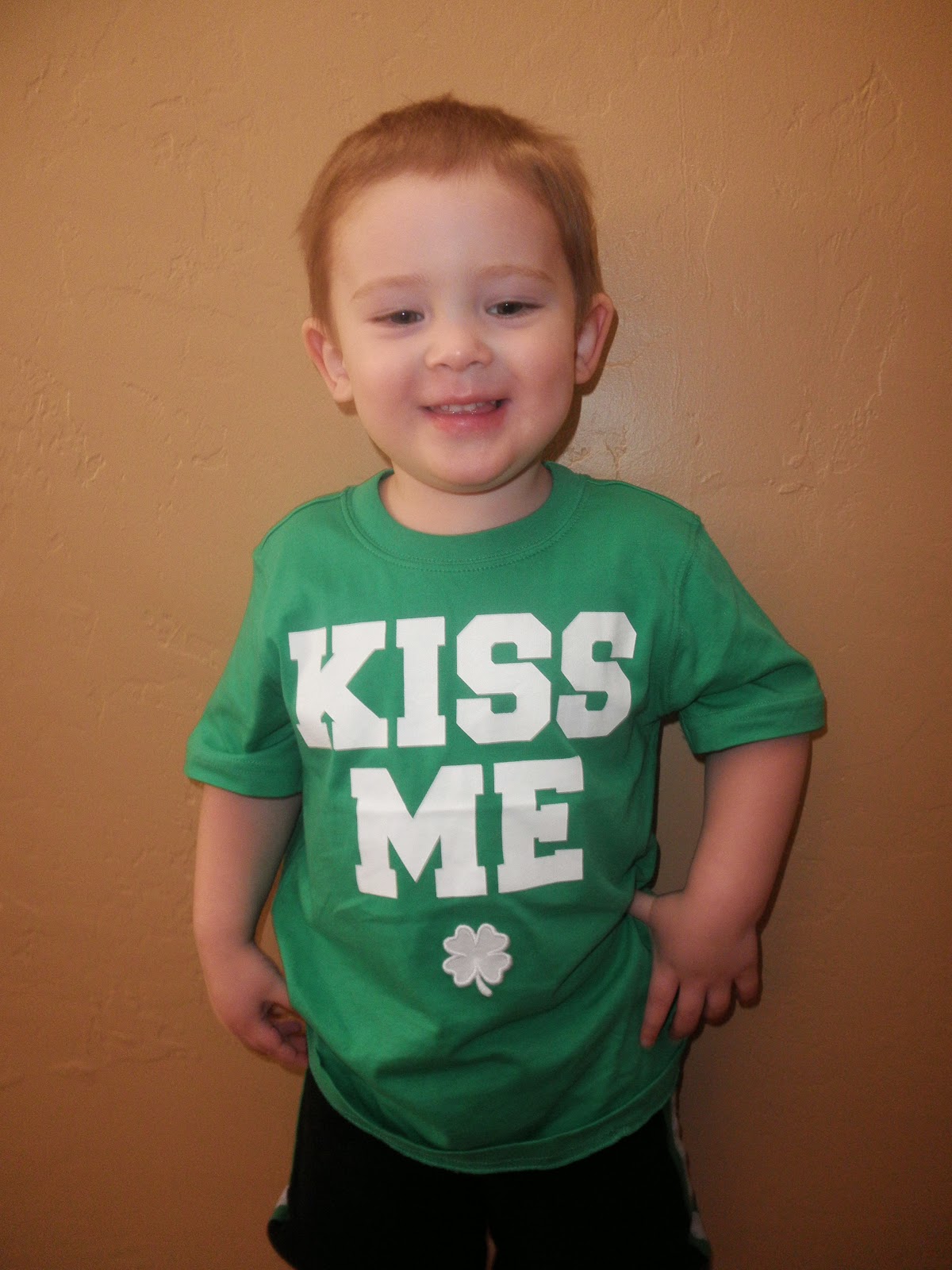 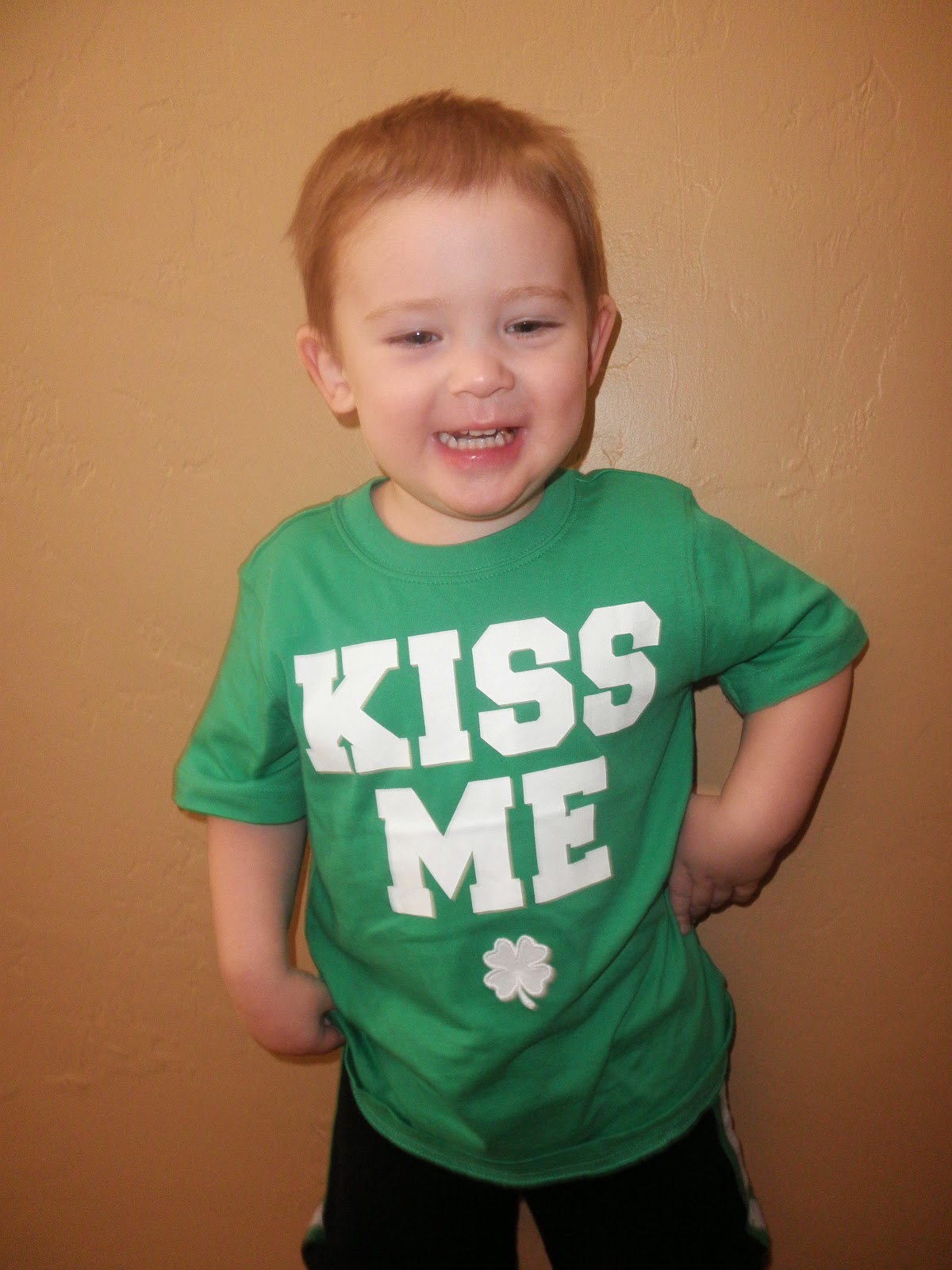 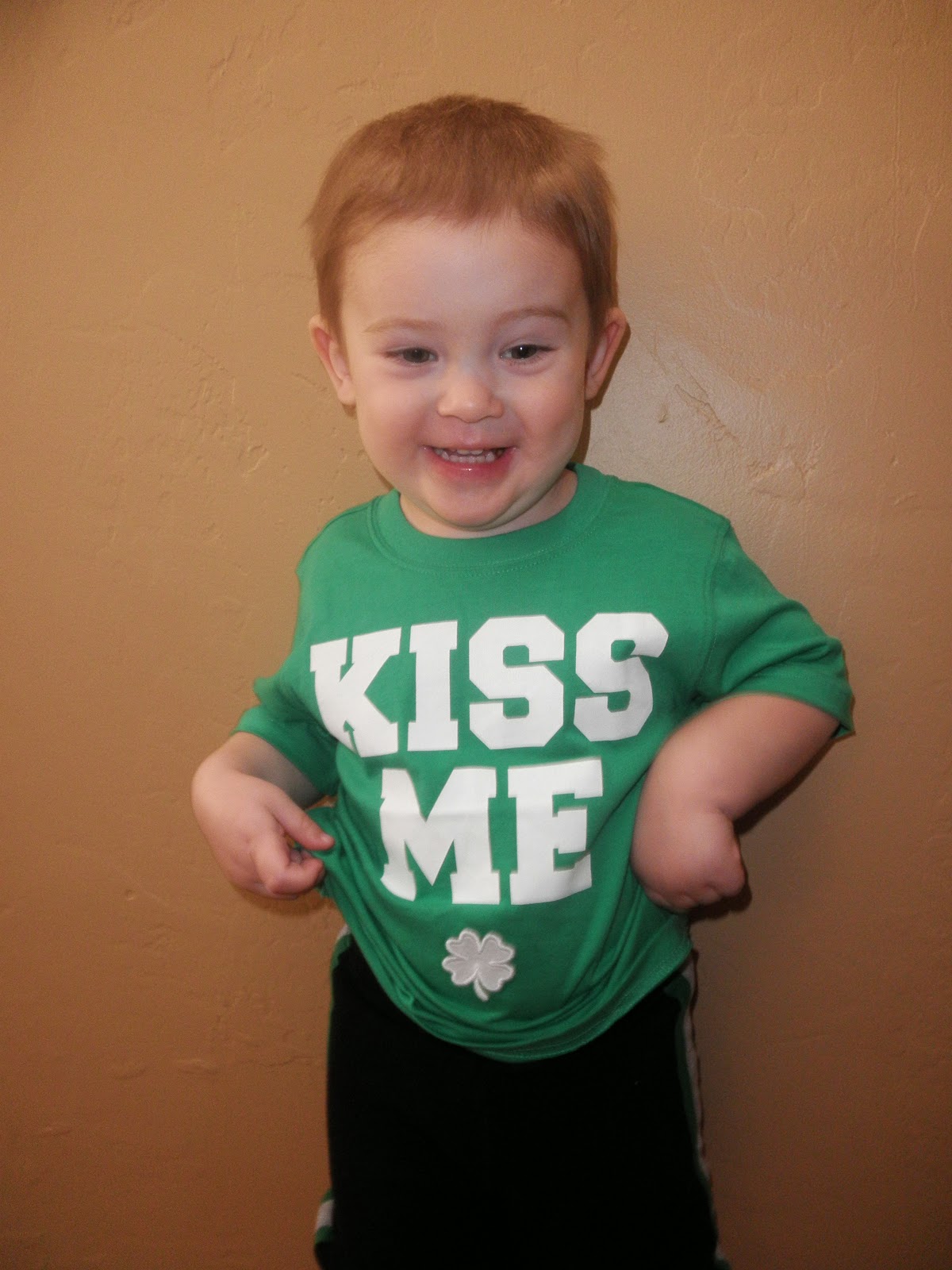 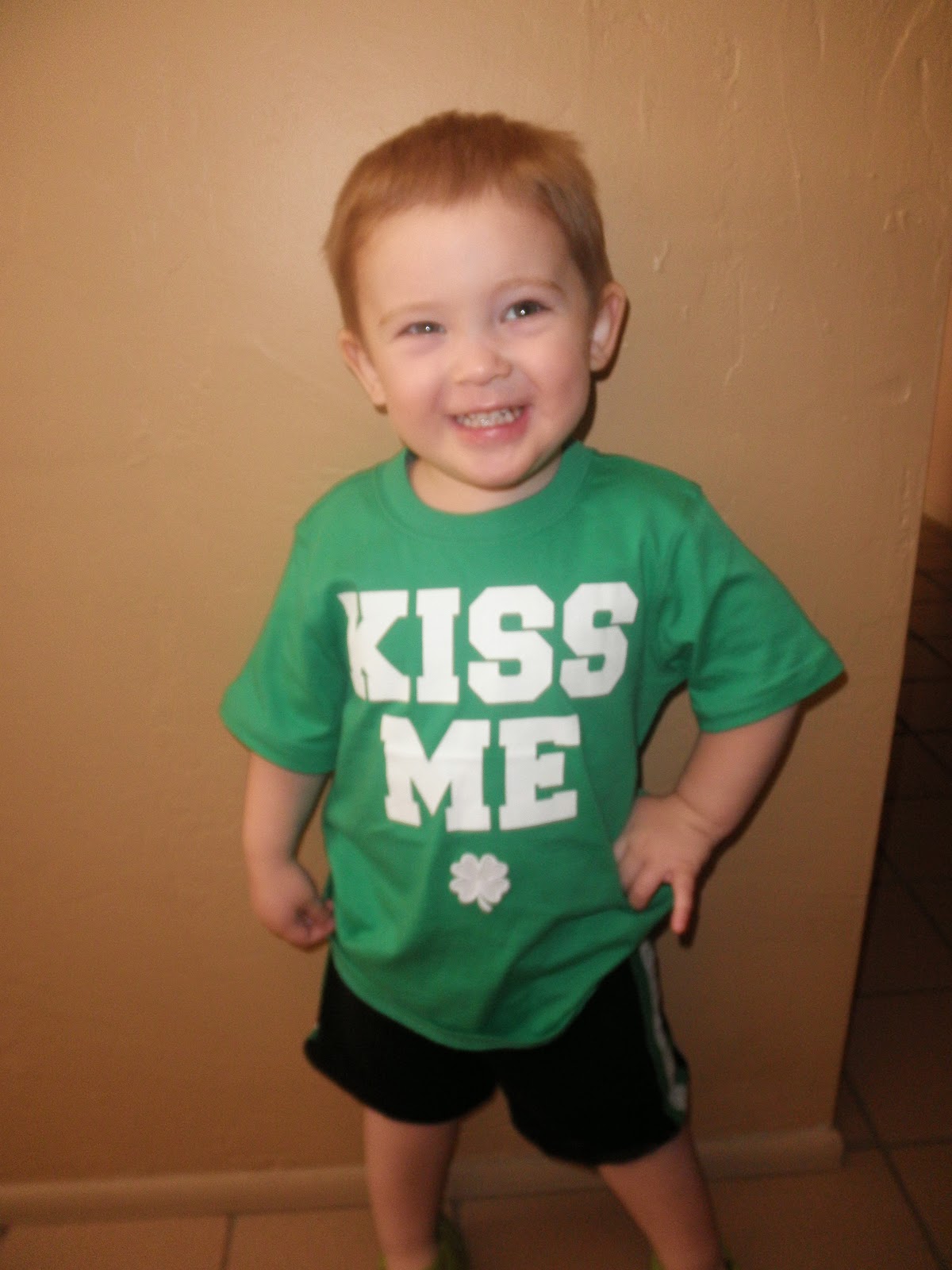 Spencer recovered (after a good 20 minutes) and we were actually able to get a decent family picture. 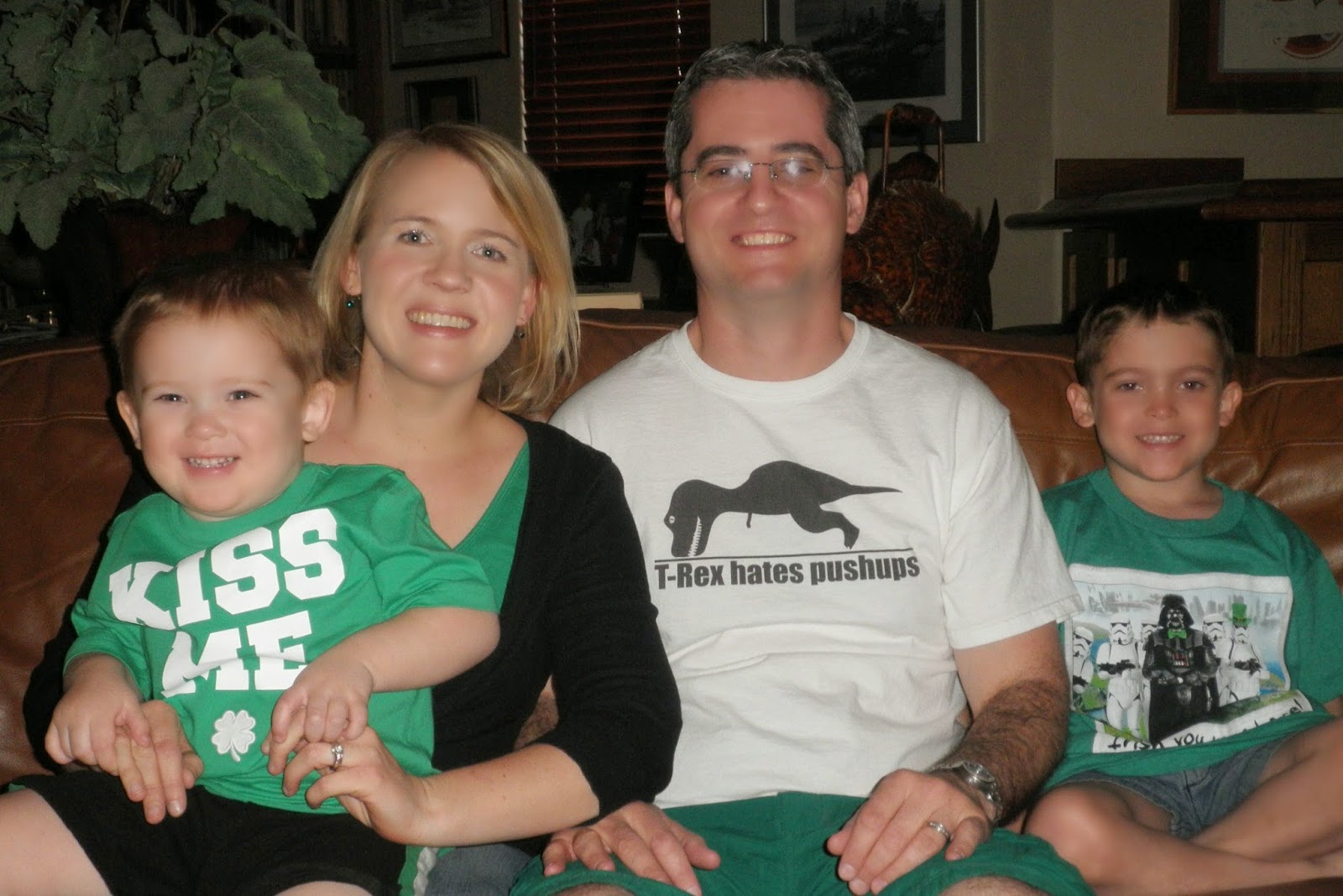 Then my parents took us out to lunch where we were serenaded by a barbershop quartet. 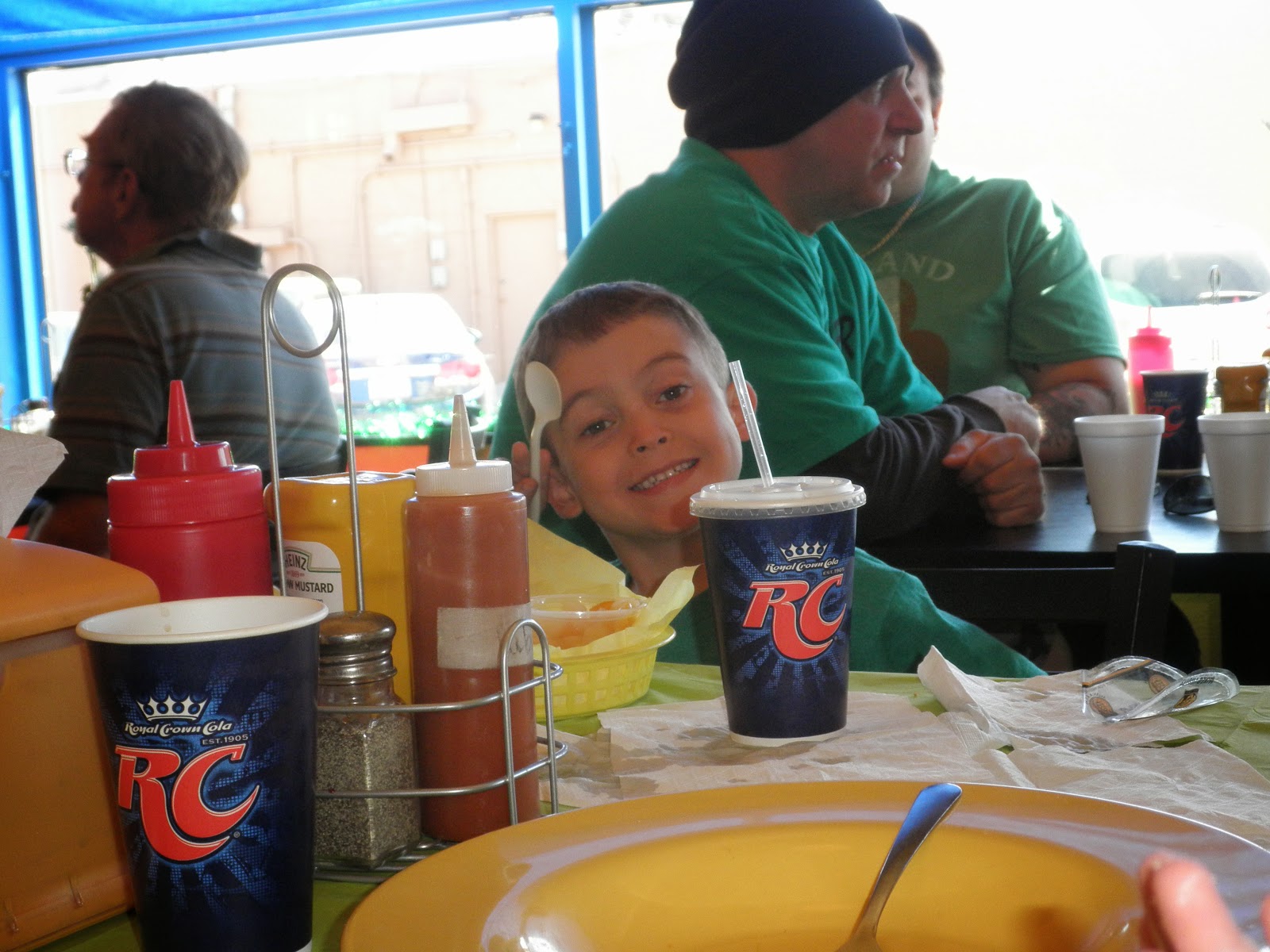 Then it was time to pack up and head for home.
We said our goodbyes to Winston, 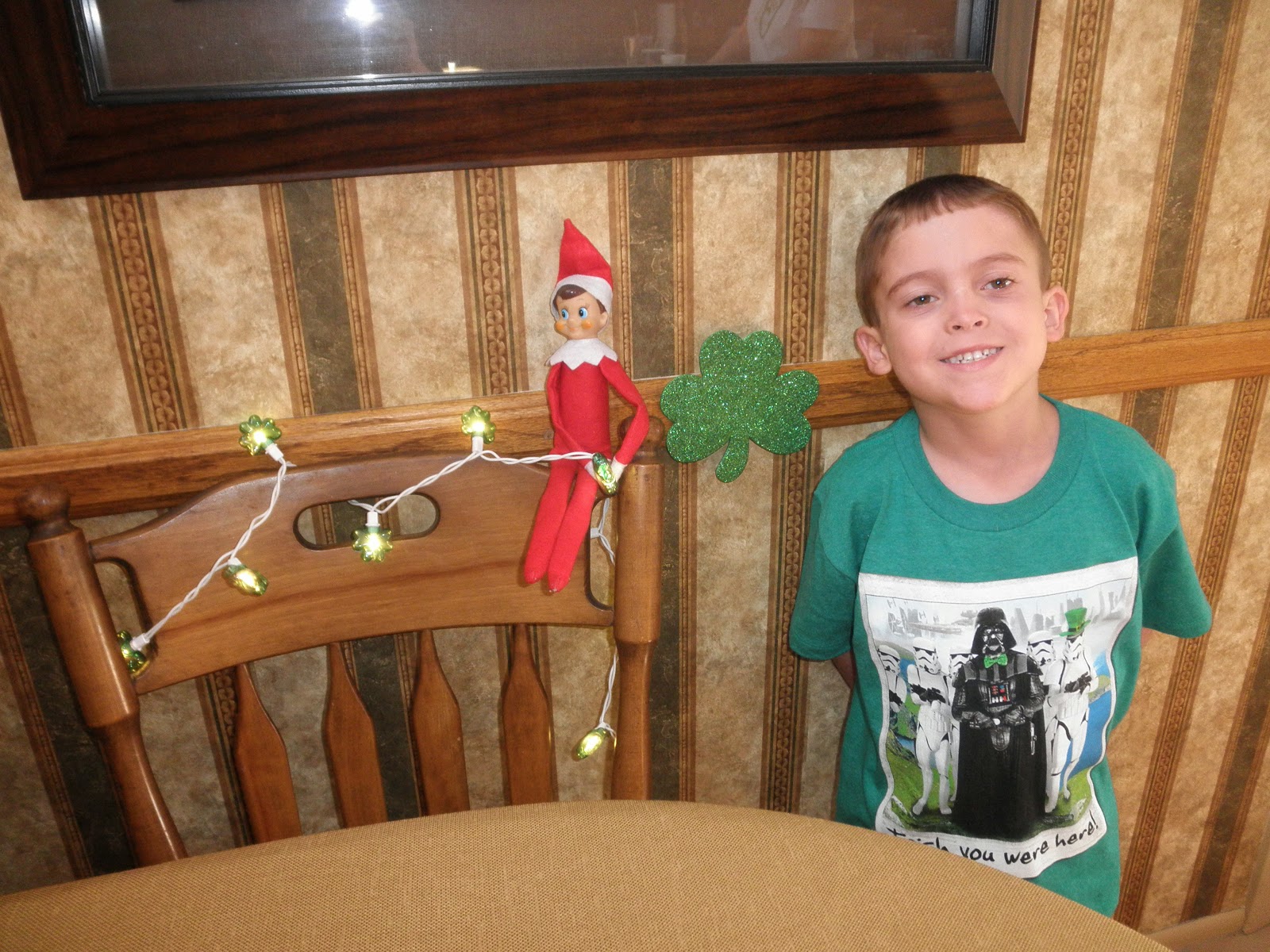 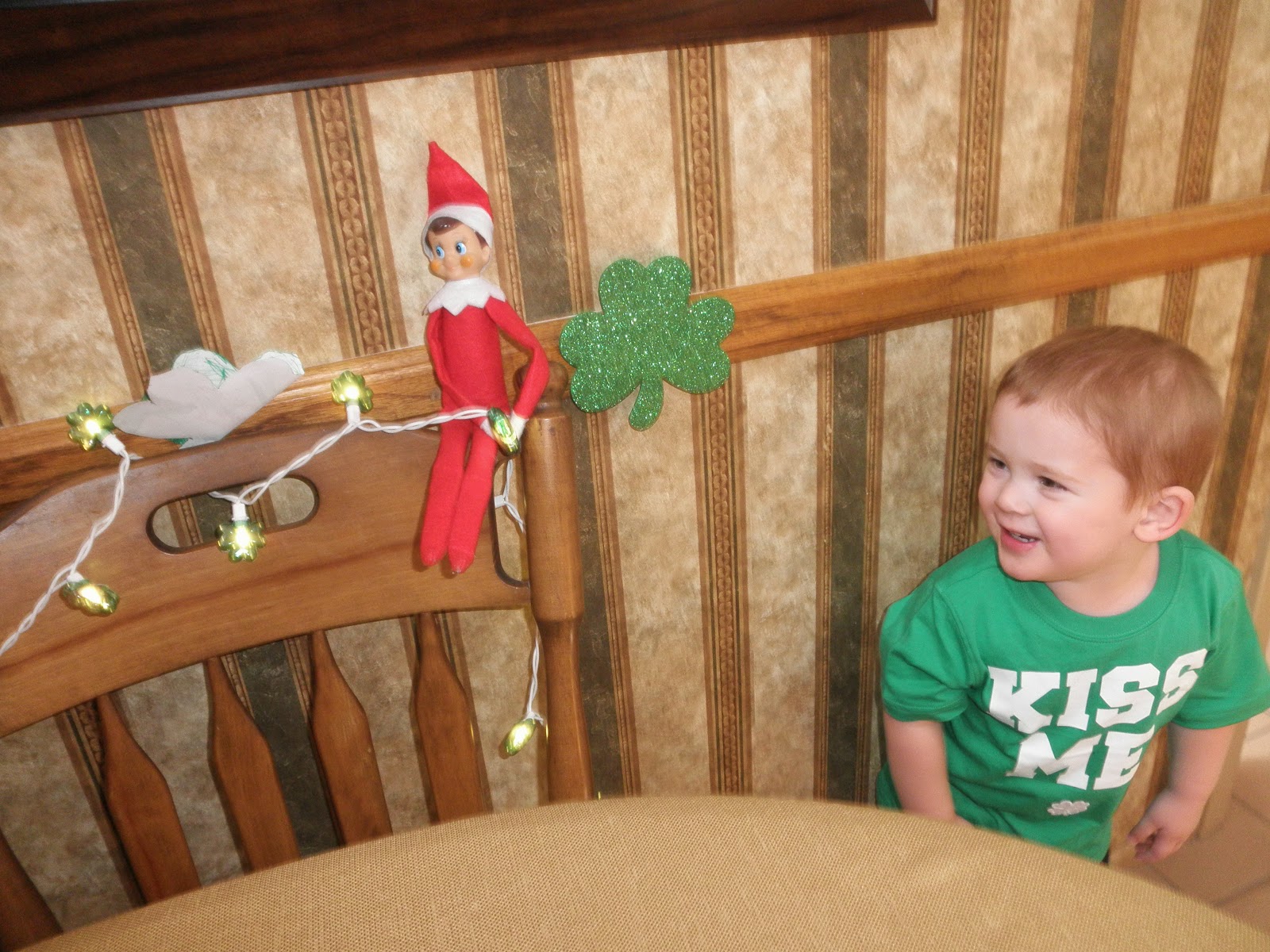 then loaded up the car and hit the road.
Once we were home we unpacked, went to the grocery store and then went to John and Maryellen's for dinner.
They took another family picture so that I could do a comparison to two years ago when they had us over for dinner on St. Patrick's day. 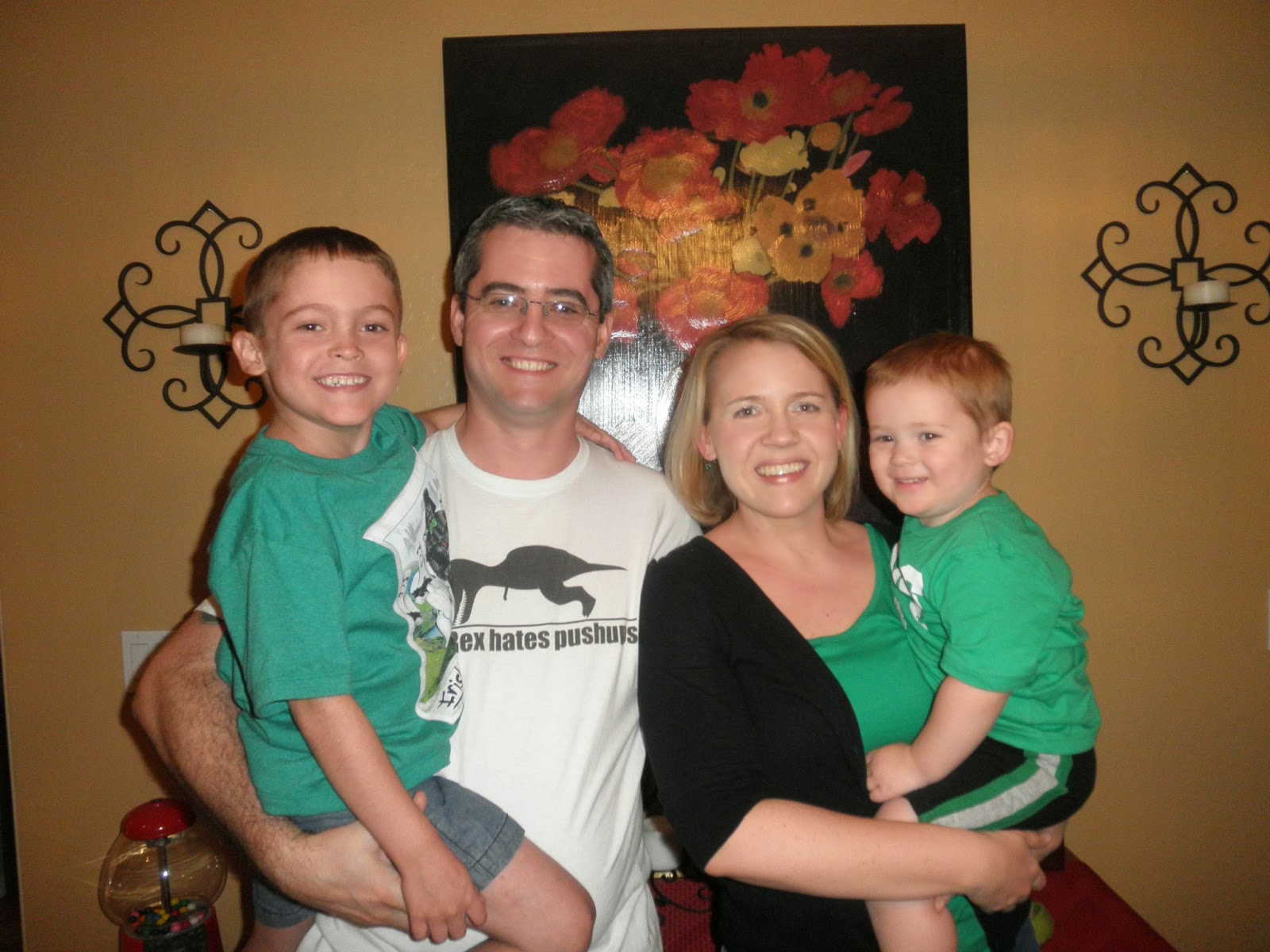 We ate outside because we have about 7 minutes left before it is too hot to do so. 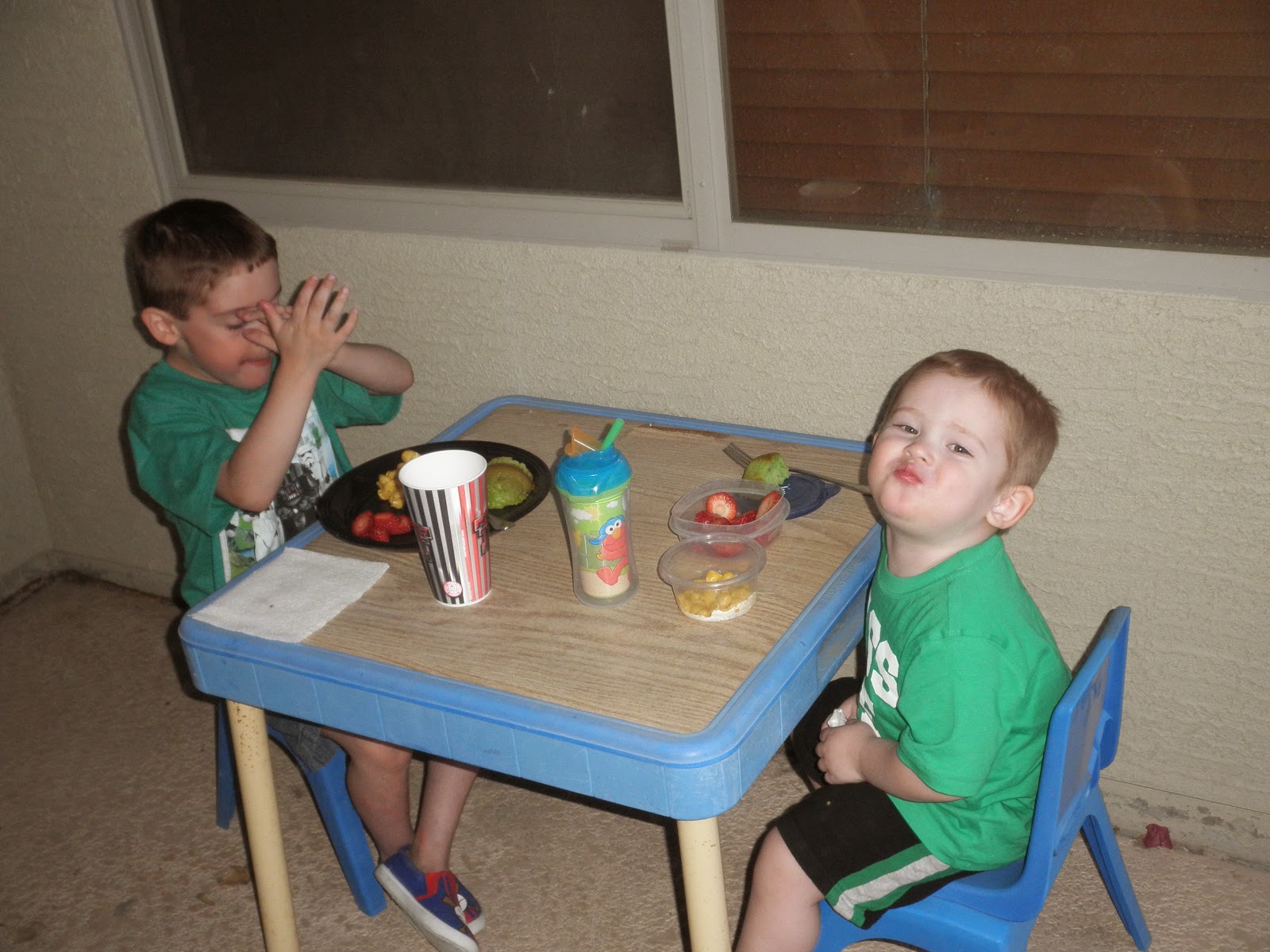 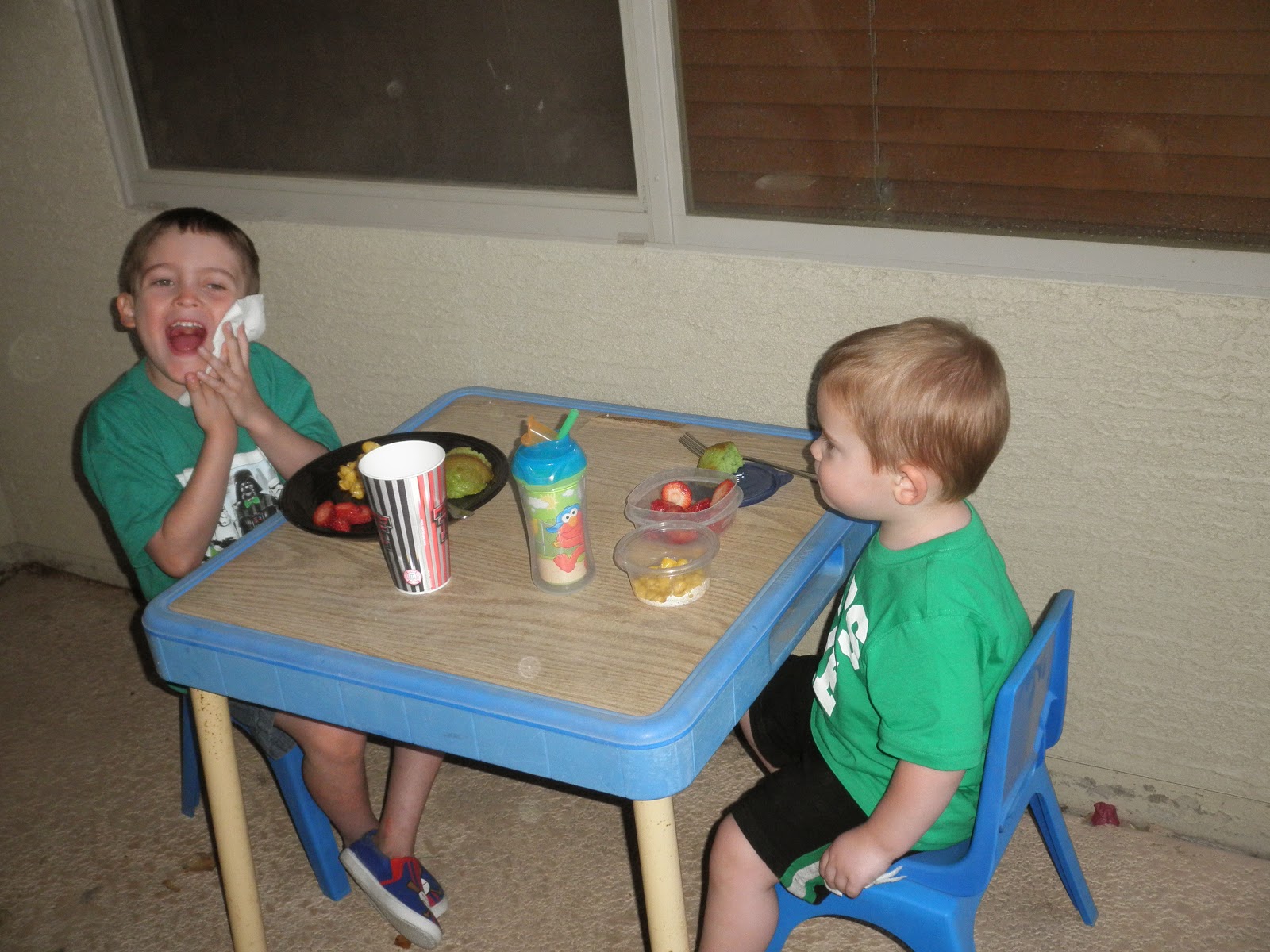 John and Maryellen have a very productive lemon tree in their backyard.  They supply us with all the lemons we could possibly want this time of year.
John rigged a light hat for Spencer so he could pick lemons in the dark. 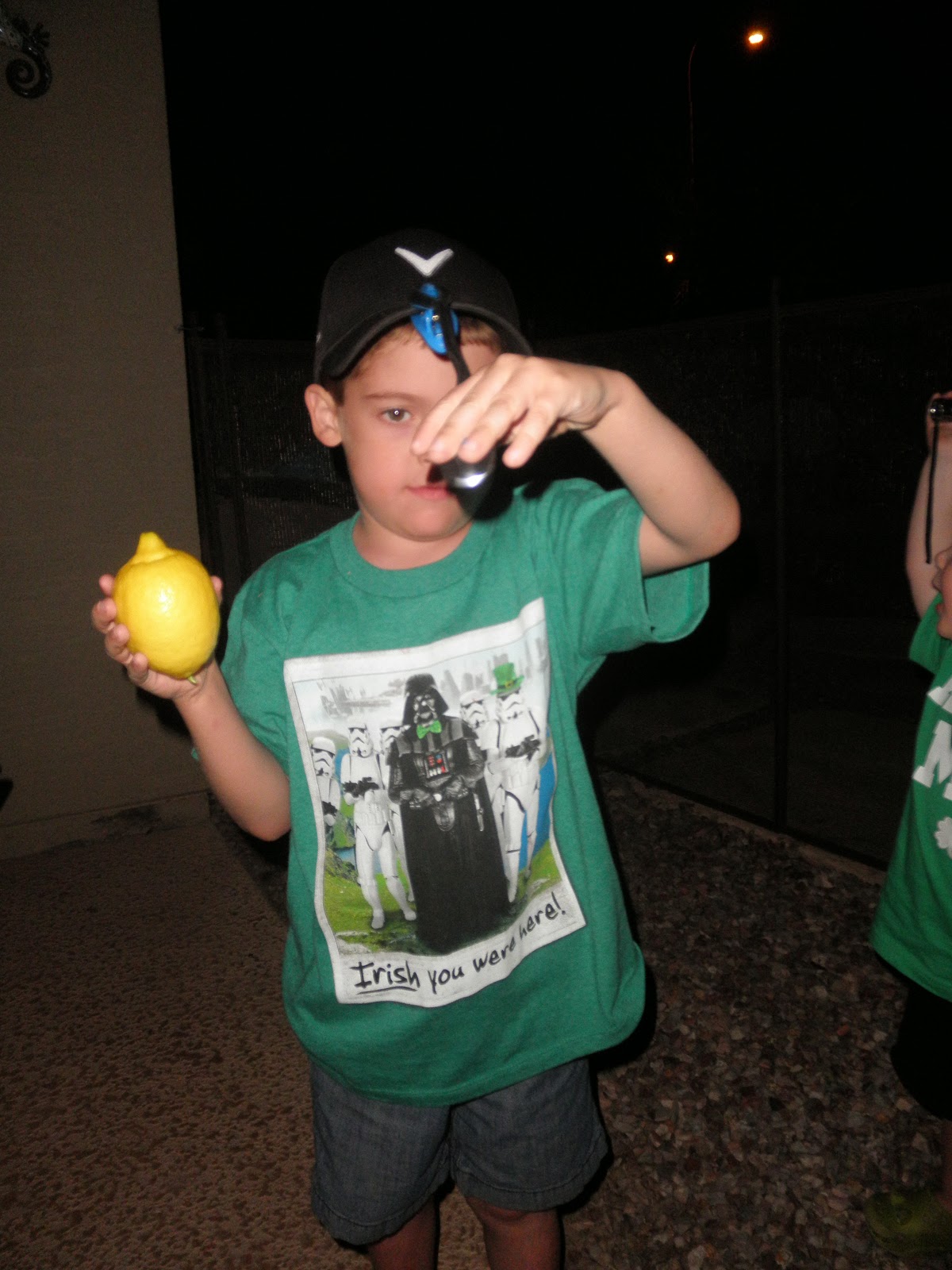 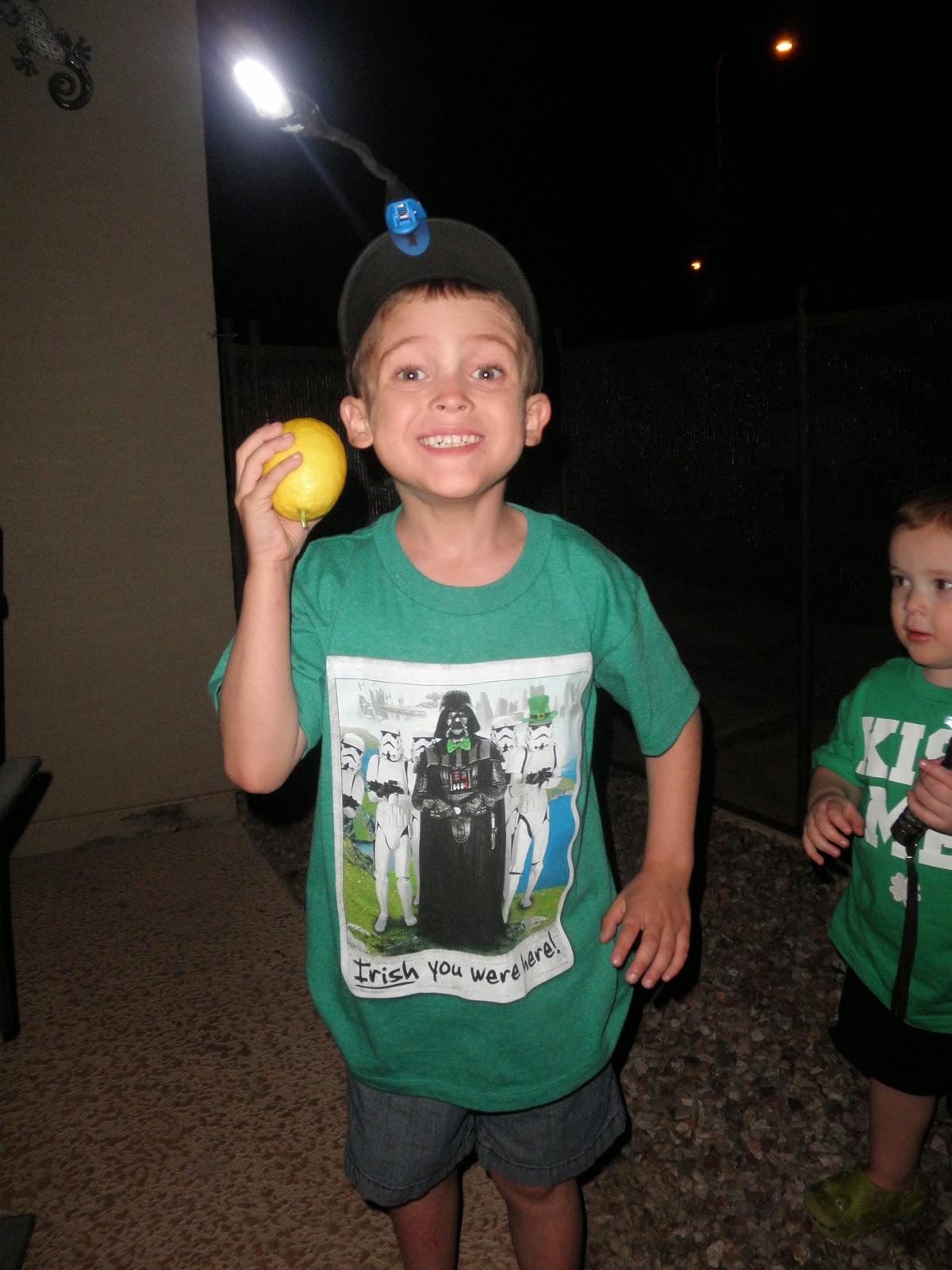 Elliott got to try it too. 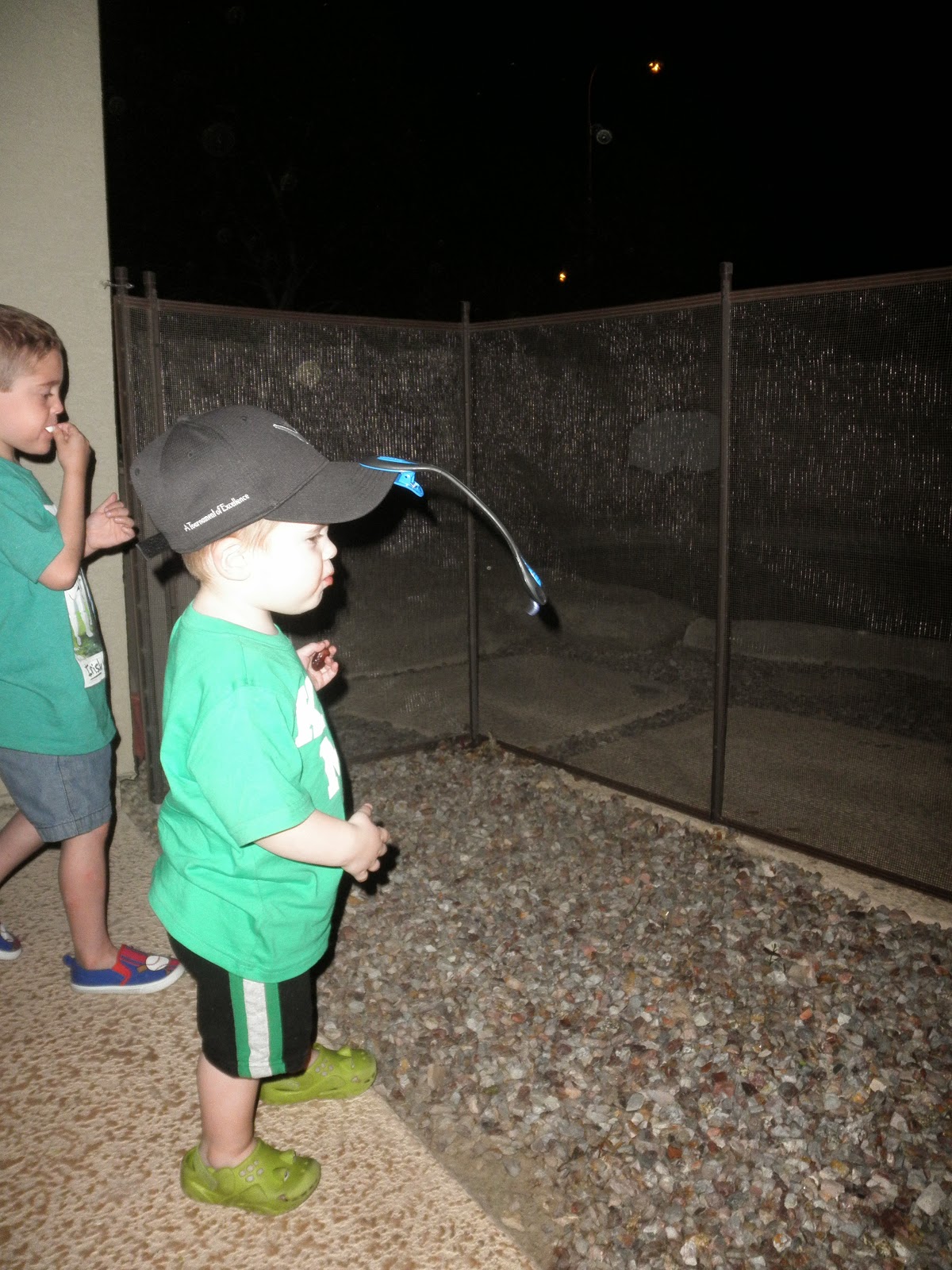 OK.  I alluded to a comparison earlier and didn't show it and then you were probably all, "What? Where is the comparison?  How dare she!"
Well, here it is:
2012 on the left and 2014 on the right.
Elliott was 3 months old on the left.  We had no idea what was going on with his liver (except that it was broken) and I was so, so, so, so incredibly stressed and tired that I still feel physically ill looking at that picture. 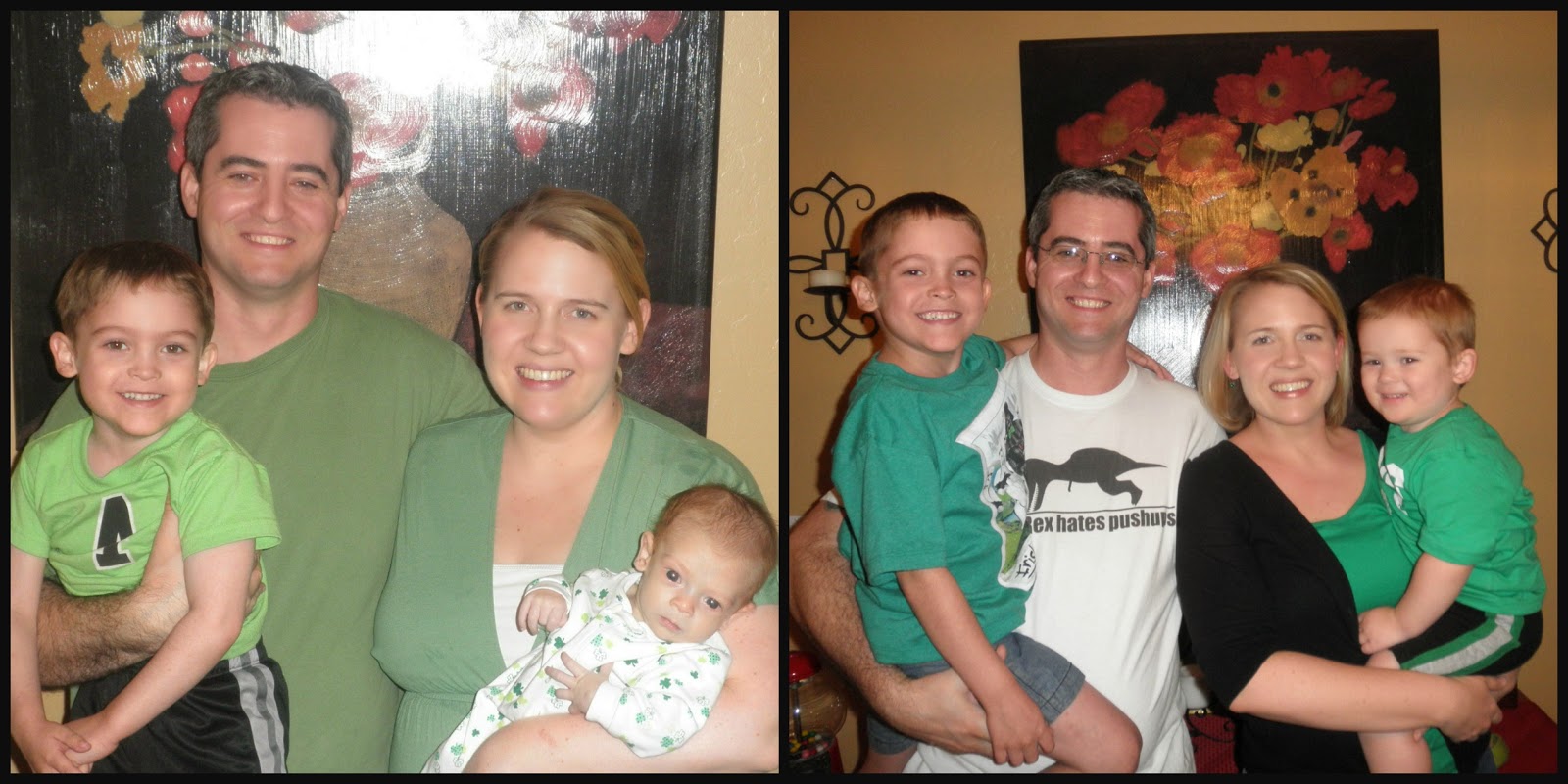 Ahhhh, you know I love me a good comparison collage. I am, however, a little surprised that the St. Patrick's Day sign didn't get included this year.

Oh and the faker smile? It totally drives me crazy (from my kid, not yours).

Finally, I feel kinda sorry for the 4th member of the barbershop quartet who obviously didn't make it into the picture, unless, of course, he's in the witness protection program, in which case, he probably shouldn't be singing in the middle of a restaurant.

Love it. For some reason your pics remind me of the year my mom made us St. Patrick's Day t-shirts. We even had dorky cute hats to go with them.
Ahh, memories. I think we will leave that one out of the wedding slideshow ha!