I have been feeling extremely stressed out for the last 10 days. There are two primary reasons.  Reason number one is that our sitter Dorothy, due to some health issues that I don't feel at liberty to discuss, is not able to work for the next seven weeks and maybe even longer.  And she's already missed the last two weeks. Dorothy has been watching Spencer since he was three years old and is the only sitter Elliott has ever had (that he remembers. Megan watched him for a few months, pre-memory), so of course we want only the best for her and if that means letting her go temporarily so she can get better, we will.  But it has been a huge trial trying to find someone to replace her.  I only need a sitter one day a week and it's actually very hard to find someone for such a limited job.  Luckily I found someone yesterday.  Madison is the daughter of my friend and speech aid Sandra.  She actually baby-sat for us when Spencer was 1.  I'm very relieved to have her in place.

My other big stress is that my school sustained some pretty heavy damage last week due to a microburst.  School was cancelled for three days, which means that I missed two days of work.  I only work two days a week, so basically I am out a week's pay.  I am an independent contractor with my school.  That means that I make a lot more money than if I was an employee, but I get no sick time, vacation time or benefits.  And if I don't work, I don't get paid.  It's never a good time to loose a week's pay, but we were barely just rebounding from my time off in July, we have double birthdays this weekend and we're taking a trip to San Diego soon.

We lost almost all of our trees on campus.  It looks so empty without them. 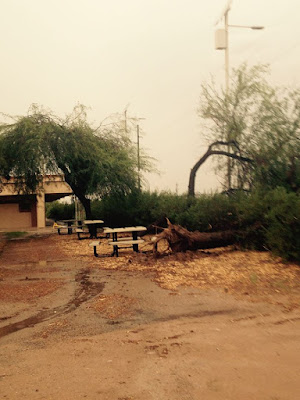 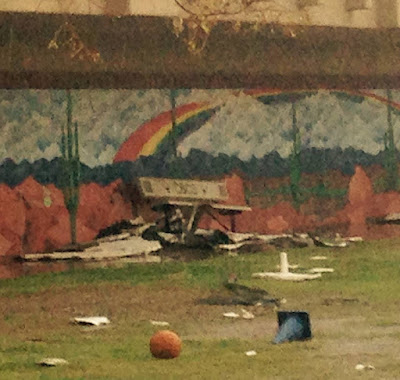 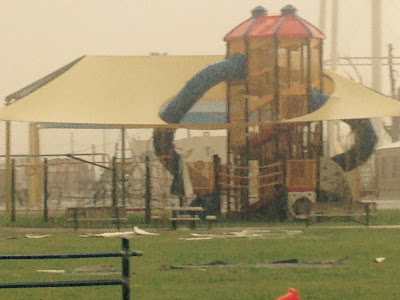 This table moved about 100 feet and over a whole building.  I don't even know how that's possible, but people that were at the school said it sounded like a tornado. 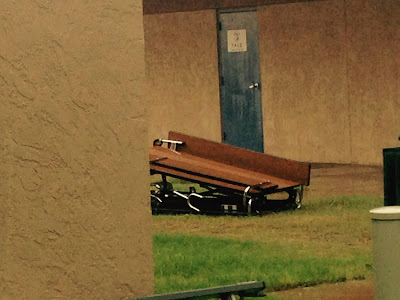 Since I was off last week I had an unexpected day at home with Elliott on Thursday.

We painted egg carton cups in the morning. 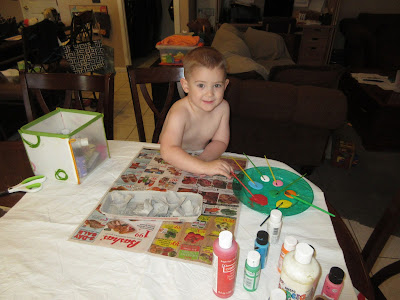 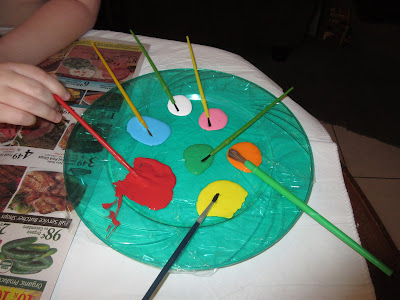 At some point I'm supposed to turn them into a flower wreath.  Good luck me. 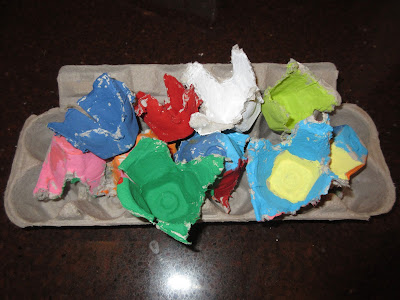 Spencer had early release from school on Thursday and I was feeling anxious about our sitter and my job, so we got out of the house and went to the mall for lunch.  Because going out to eat is always the answer to financial stress. 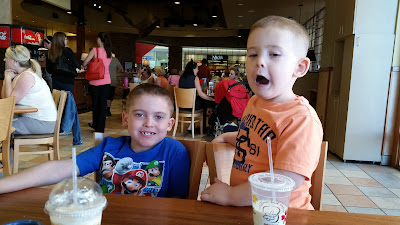 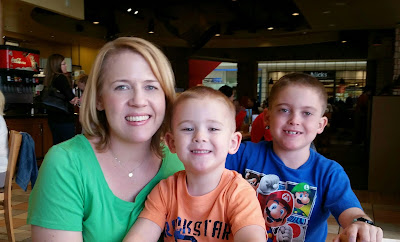 After lunch we walked around and went to the pet store.  Elliott was DELIGHTED with this dog. 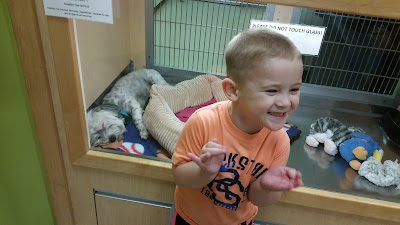 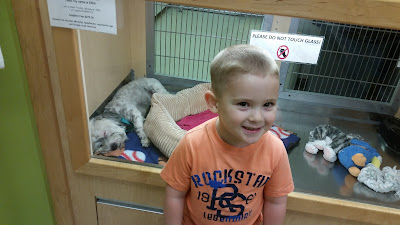 Look at his name! 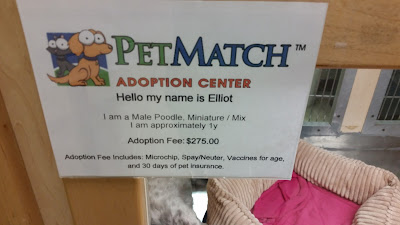 Spencer really liked this red jacket, so I squeezed $7.60 out of the budget and bought it.  Can you believe it?  $7.60!  What a deal.  He wore it at the mall until it was time to leave.  It will be a perfect Arizona winter jacket. 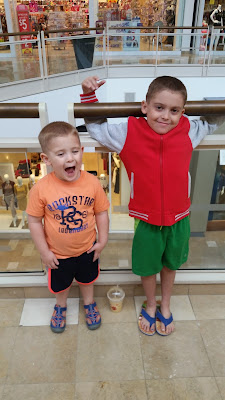 I was home on Friday as well, although I did go to work for a few hours in the afternoon for a meeting my supervisor still wanted to have, even though three people called in on three different phones to participate.  It was ridiculous, but you had better believe I billed for that time.

Before I left I did lots of laundry.  I decided to change Elliott's sheets.  Because, you know, I do that pretty often and it's not a big deal.

These are the sheets that I put on. 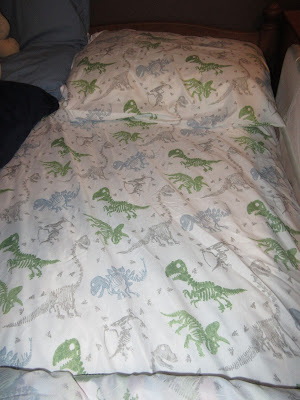 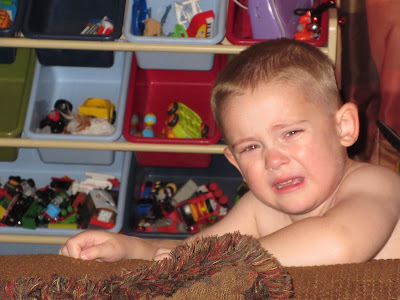 Saturday was a better day.  I made a nice dinner and we ate in the dining room.  Please note the metal scroll artwork on the walls.  Happy birthday to me.  There will be a whole post about my presents soon. 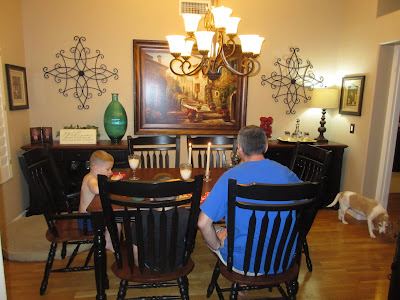 We even used candles.  The crystal candle sticks were wedding presents.  They were sent from Budapest. 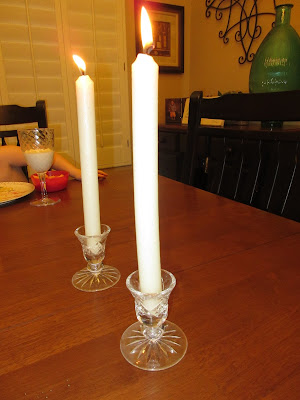 We spent a big chunk of Sunday at Monica and Rick's house eating and swimming.  I took 0.0 pictures though.  It was a nice day to just relax and not worry about life and documentation.

On Monday night Spencer and and I went to Costco after dinner.  There was an awesome sunset with a very ominous looking storm developing in the West.  Don't worry, Spencer took these pictures while I focused on driving. 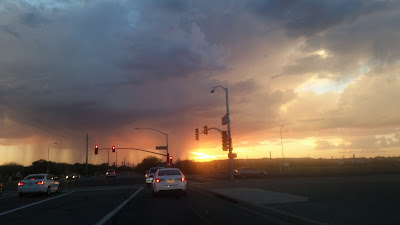 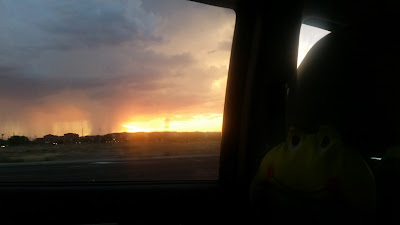 This was when we got to Costco.  I have never seen a cloud look like this.  And this was facing East, not anywhere close to where the sun was setting. 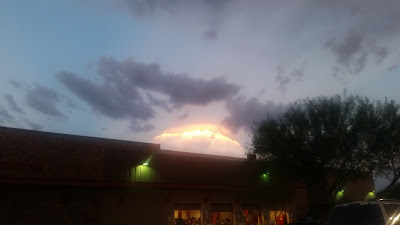 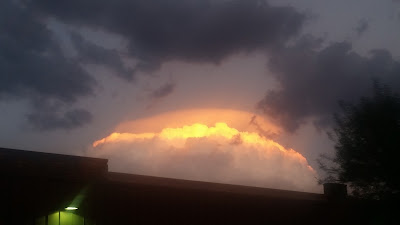 How crazy is this thing? 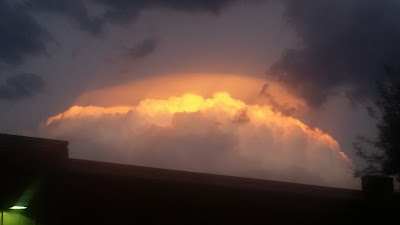 We were in Costco for about 20 minutes and by the time we left, the storm was upon us.  I'm shocked we didn't get struck by lightning in the parking lot.  We made it home before the rain started and then we just got slammed.  It was awesome.

And I will end there, mostly because I haven't downloaded pictures from Tuesday and Wednesday.  And that is mostly because I spent all afternoon looking for a sitter for tomorrow because Madison can't start until next week and Dorothy thought she could come one more time, but actually cannot.

Luckily my friend Katie can come over and her time combined with Michael going to go to work early so he can come home early will allow me to put in a full eight hours.  I tell you, it's like playing a big version of Life Tetris.
Posted by Natalie at 10:22 PM

So sorry things have been so stressful lately. Hopefully everything settles down now.

Who took the pic of the 3 of you at the mall? That is an awesome jacket and a great deal, I really miss the crazy AZ storm clouds, and I love your metal scroll artwork. Happy birthday indeed :)