Spencer was never a pacifier baby. It's not that we didn't want him to have one or didn't give him one, he just never "took" to it. I can actually show you the three pictures that we have where he's got a passy in his mouth. Really, there are no others.
This is the day we took him home from the hospital. The passy is almost as big as his whole head. 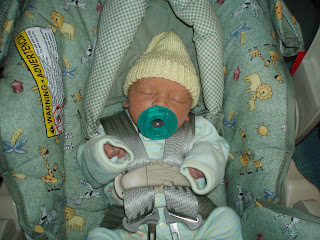 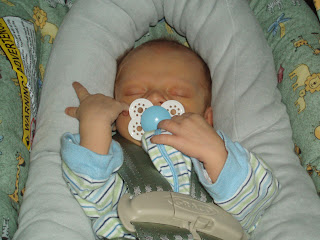 And his first Thanksgiving at about 10 weeks. 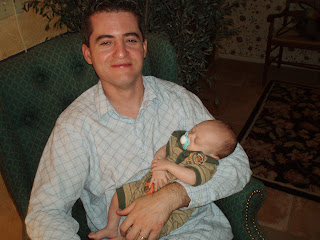 I was cleaning out one of Spencer's dresser drawers last week and found his passy. I gave it to him and he had no clue what to do with it. I demonstrated and he thought it was really funny. He played with it in his mouth for the next 5 minutes. 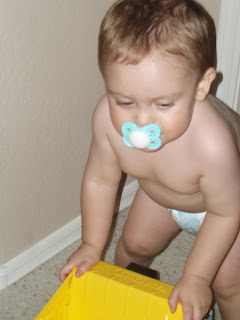 I don't think he really got it though, because he mostly chewed on it. 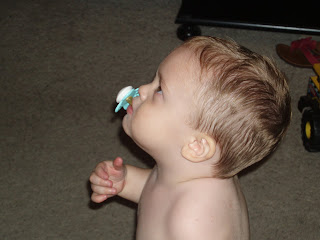 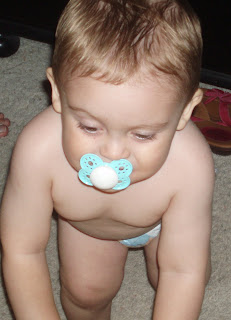 Don't be concerned about Spencer turning into a toddler with a passy addiction. It's already been tossed.
Posted by Natalie at 5:45 AM

You are LUCKY!! Lilly STILL has to have her passy ("binkie" in our house), but at least only when she is sleeping - it doesn't leave the crib.
Zac never took to one, thank goodness!

I can't wait until Spencer starts talking because I think he's going to be hilarious. He already really cracks me up.